It has been pretty quiet here at Mittry. We have both just been kicking back and relaxing, not doing too much at all.
We have been into town a couple of times since we got here though. Over the last few months, the Canadian flag that I fly most places has started getting a bit tattered. I'm not surprised as it has been through some pretty good wind storms. That was one of the things I needed to replace so found a vendor at the Arizona Marketplace that sold flags.
While we were in Tucson I had snagged my cell phone belt pouch on something and broke the belt clip so also went in search of a replacement for that. I was able to find a couple of vendors with suitable replacements at decent prices so bought a couple so I would have a spare. We also picked up a couple of other odds and ends.
After that we met up with some friends from back home, Rick and Deb Young, for dinner at one of our favorite spots; Ninja Sushi.
Friday morning also dawned mostly overcast but just before sunrise I managed to catch this sunrise. The sun is rising earlier now so I have to get up fairly early to get these. 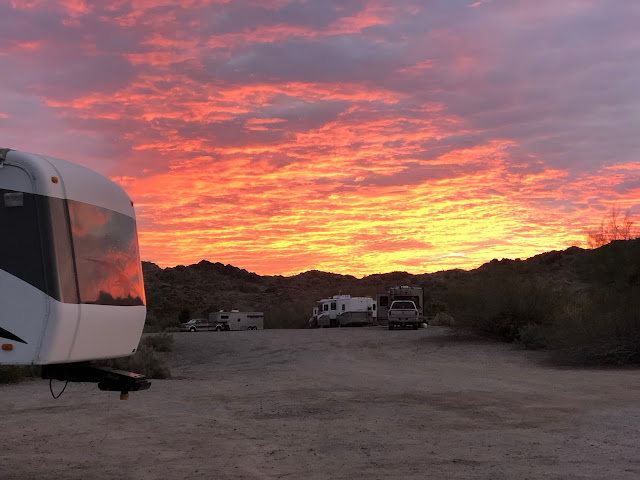 It did clear off later in the day so we were able to get a good charge back into our batteries from the sun. So far this trip, we have only used about 10L of gasoline for our generator, relying on our solar panels for 99% of our power needs. The other nice thing is that the sun is quite a bit higher in the sky at midday now so I don't have to go up on the roof to tilt the panels any more.
Our weather has also made a big turn around from 10 days ago. The daytime temps have been into the upper 20's and only going down to the mid teens overnight. We are back to sleeping with the windows wide open again!
Yesterday we were back in town again. This time to visit other friends from home, Gerry and Marilyn Gerow. They are only here for another couple weeks before high-balling for home. Chris also picked up the ingredients for a rib dinner which we enjoyed tonight. She has pretty much got her BBQ Ribs recipe down pat. They were yummy and enough for left overs tomorrow!
After we got back to camp yesterday the wind came up and by sundown it was really howling. We had the awning out for a while in the afternoon, but had to pull it in or it would likely have got torn off! Even at bed time it was blowing hard enough to shake the trailer pretty good at times. I had the new flag up and just before turning the lights out, figured I should probably take it down before it too got torn up.
I was able to get our internet Mifi supplier to send us a new unit. We should be able to pick it up tomorrow. The old one is driving us crazy at it reboots itself anywhere from every few seconds to every 5 or 10 minutes.
Posted by Rob and Chris's travels at 7:18 PM