Snow! and the YAM airshow

Well, it looks like we escaped Tucson just in time! We pulled out of Casino Del Sol about 10AM on Thursday and made our way towards Yuma. About a half hour north we ran into pretty heavy rain and it continued after we turned west on I-10 and right through to Gila Bend. It was also pretty cold but not freezing fortunately. I gather a cold front was going through because later on that evening and over night Tucson got this.

Yikes! I'm sure glad we left when we did! Once we did get to Yuma, we got ourselves set up at the Yuma Aeromodellers Contreras field. I guess the rain must have followed us because no sooner were we set up that the skies opened on us again! It poured for the rest of the evening. No snow though thankfully.

Friday actually dawned fairly clear. Just some low puffy clouds around. Shortly after sun up, the local club started arriving and began getting the field set up for Saturdays activities. I was hoping to get a couple of flights in but by the time the set up crews were done, the wind had come up and I elected not to risk the plane. Chris and I had a couple of errands to run so we did that in the afternoon instead. 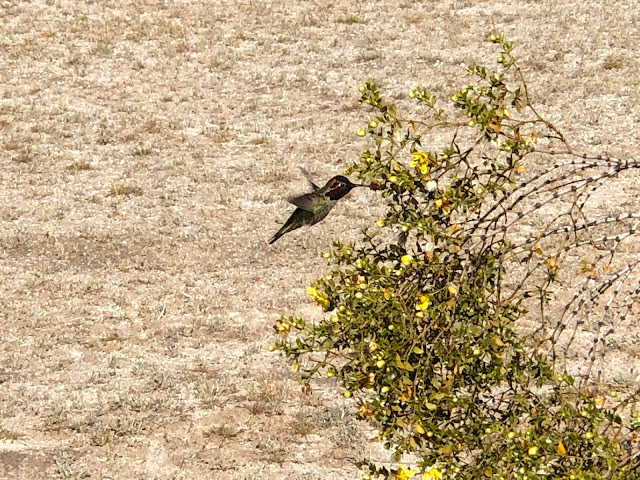 I managed to catch this little guy tasting a creosote flower while taking Maya for walk in the afternoon. The photo doesn't do his colours justice. He had a vivid green back and bright red throat.

After another cold night, Saturday dawned clear and once the sun was up it started to warm up nicely. People started to arrive for the airshow and by about 9:30 the parking lot was full and people were parking in the desert. After a short pilots meeting at 9:45, the local air cadets did a colour guard and the the US and Canadian anthems were played. Then the flying started. They had me up first again this year but had me flying with another pilot with a jet. We were able to tag team our maneuvers so that when one of us was turning around the other was flying something in front of the crowd. We both had real good flights and once finished got to sit back and watch the rest of the show. 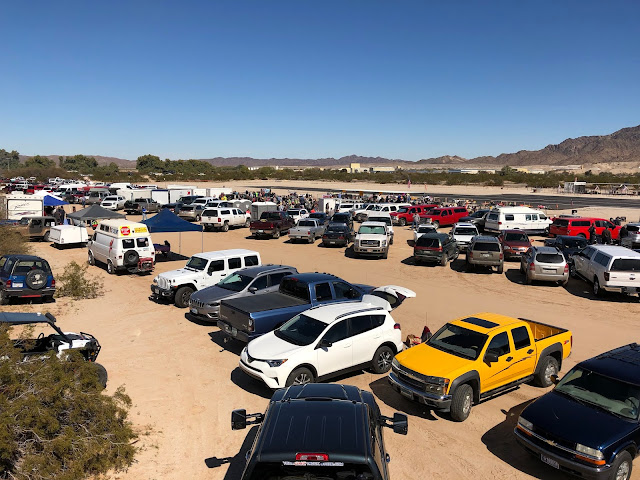 This is just a small section of the parking lot with the flight line at the top of the photo.

It continued to warm up through the morning and by the lunch hour, was starting to get downright warm for a change! The show wrapped up about 1:30 and then we all gathered on the runway with our planes to answer what seemed to be a gazillion questions from the spectators.
I did get one more good flight after this then packed it all away til next time.

Posted by Rob and Chris's travels at 6:39 PM