Our season in Okotoks is almost coming to an end

I think I have mentioned in the past that we have never been real happy with the performance of the stock fridge that came with our trailer. It never would get as cold as we felt it should and it would run almost continually to maintain a barely acceptable level of cold. When running on propane it would burn up a 30 pound (7 gallon) tank of propane in a little over a week and we could only run it on AC power if we were plugged in. If I tried running it off our batteries through the inverter, it would drain them in about 4 or 5 hours. I did some calculations and learned that it was using the equivalent of about 21 KWh of energy per day! If I translated that into electrical drain on our batteries, that equated to about 1,450 Amp/hours per day.

Some of Grand Designs RV's come with a residential refrigerator from the factory and we had talked about replacing ours with a residential unit for a while. After doing some research we decided the time was right and went and did it!  I won't detail all the process here but if you are interested, you can see the gory details >here<.

As a comparison, the new fridge uses about 1.5 KWh of energy a day or only about 125 Amp/hours per day. 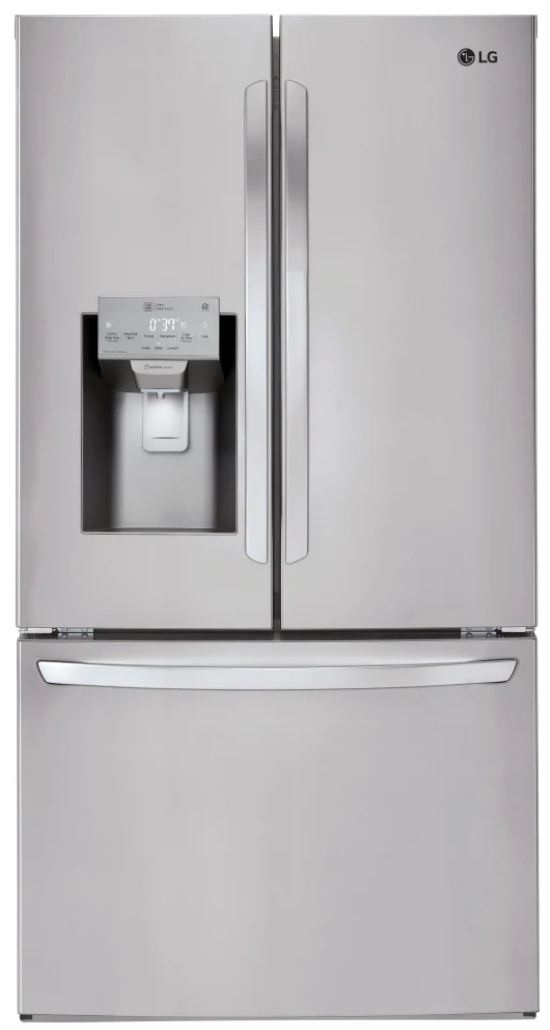 One thing I have missed this summer is flying. Believe it or not, up until August 28, I hadn't flown anything since before leaving Kamloops in May. Most of the usual events in Alberta had been cancelled due to COVID or conflicted with our work schedule but near the end of August there was an event scheduled up in Red Deer that coincided with our days off. Thursday, after our shift finished, we prepped the trailer for a Friday morning departure and made the 2 hour drive to the Red Deer Propbusters field just outside Sylvan Lake.

They have a beautiful grass runway in the middle of what was an old turf farm. The surrounding area has been replanted in Canola but the main runway is still the perfect grass left over from the turf farm. It was a beautiful sunny day when we arrive and several local pilots were already there. We quickly got the trailer set up and I started unloading the airplanes. While I was doing that, Chris was happily showing off our beast to several interested locals.

This was to be a jet event and several jets were in attendance including a gorgeous L39 owned by one of the locals. 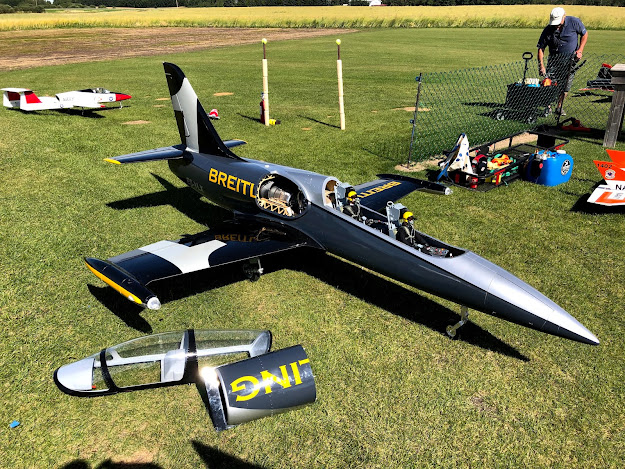 I got my stuff set up in fairly short order and after doing my pre-flight checks, took off and put in a fairly tame flight to 'scrub the rust off'. Me, not the airplane! That all went very well and I put in two more during the afternoon. The L39 flew but suffered a flame out a couple of minutes into his flight. Fortunately the pilot was able to get it back on the ground safely so it will fly again another day.

Unfortunately, late in the day we got word from the event organizer that due to forecasted high winds for Saturday, the event that was supposed to happen would be postponed to Sunday.

I must also add that the whole time we were there, the Propbusters club members were wonderful hosts and really made us feel at home. Special thanks to Steve Morgan, Stacy Jussila and Jonathan Vogt.

We pulled out Monday morning and made our way back to Okotoks.  All in all it was a very relaxing weekend and felt really good to get totally away from the campground for a few days. 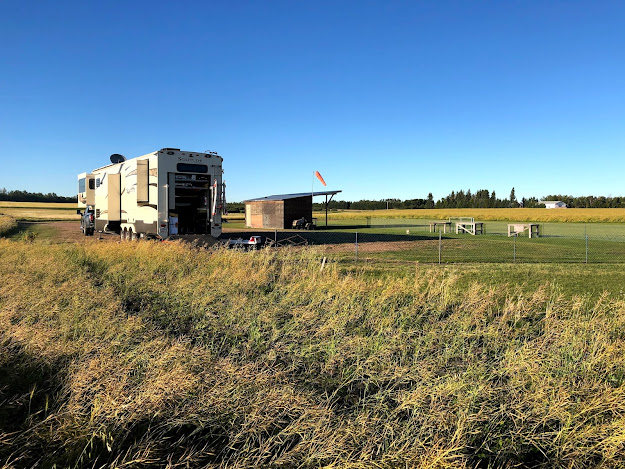 We are now into mid September and I find it surprising that the seasons are changing here this early. Maybe it is the elevation or the climate or probably a combination of both but the leaves are well into changing for fall. We stared to notice things changing 2 weeks ago but things are well underway now. The other hosts here tell me that the leaves should be mostly down by the end of the month. 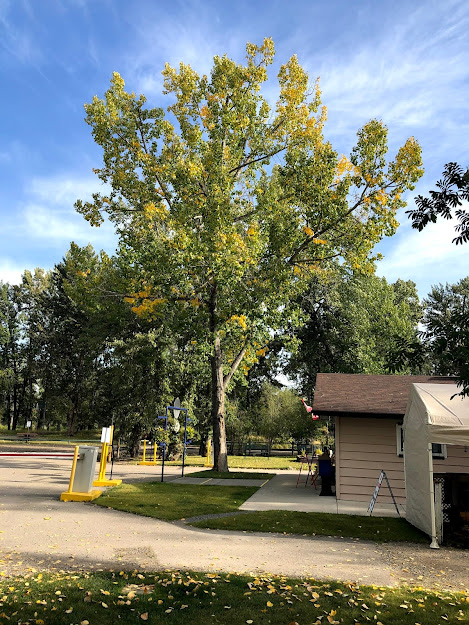 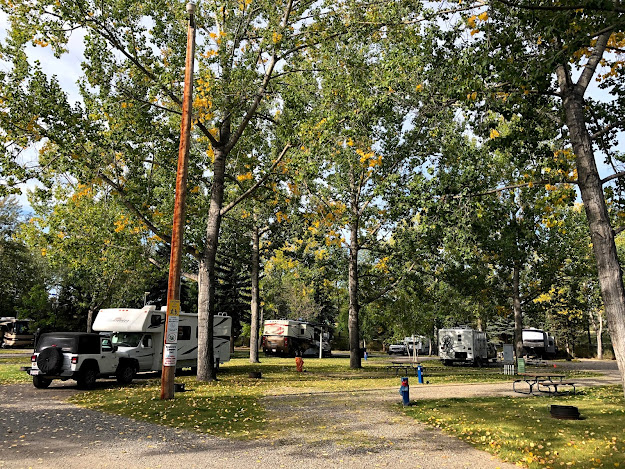 Maybe it is the approach of fall but another thing I have noticed lately is that there are squirrels everywhere! We have seen quite a few through the year but right now they seem particularly active. No doubt preparing for winter. Around here the most common variety is the Eastern Grey Squirrel which around here seem to be predominantly black.

I have also mentioned in the past our herd of urban deer. As far as I can tell there are three does around here; 1 with 1 fawn, 1 with 2 fawns and 1 with 3 fawns. There are all very unafraid of people and can be seen wandering around the campground almost daily. 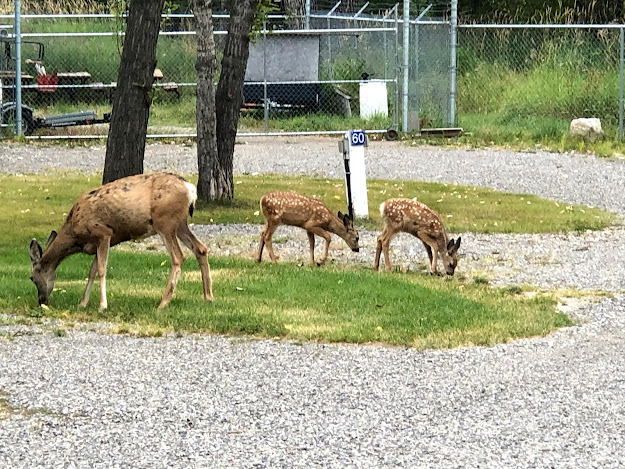 The campground here shuts down at the end of September and all the guests have to be gone by Oct. 1. I expect we will have to stick around for a few days after that to put things to bed but regardless we have to back in Kamloops for several appointments on Oct 5 so we plan to leave here by the 4th.
Posted by Rob and Chris's travels at 1:36 PM