After fighting with our Norcold 2118 since almost day one with this rig, we finally had had enough and made the decision to get rid of it and replace it with a residential fridge.

We probably spent the better part of 48 hours over several weeks, measuring, researching, visiting dealers to look at different models, remeasuring and more researching before we finally decided on a particular replacement. We early on ruled out the model (Samsung RF18) that Grand Design installs in their -R models as the reviews were not very good, we felt we could get a bit bigger unit in and I really wanted an ice maker and water dispenser. The model we finally settled on is a 22 cuft 3 door, bottom freezer model made by LG; specifically the LFXC22526S. 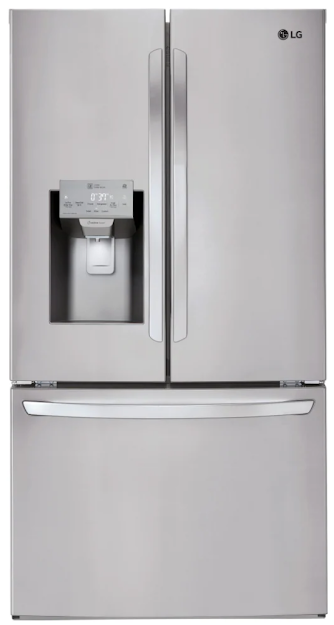 When it came time to install it, I was fortunate to have a local RV tech who has done a number of fridge swapouts help, which made things go much easier.

We started by removing the doors on the old Norcold and disconnecting everything in behind. All told the removal only took about a half hour and getting it around the island and out the door was quite easy. We had one other person help for the heavy lifting which worked out well; we didn't get in each others way too much.

After the old one was out, we started to get things ready for the new fridge. We had to cap off the propane line and reposition things a bit as GD had installed the line to the range with a bit of a kink in it. 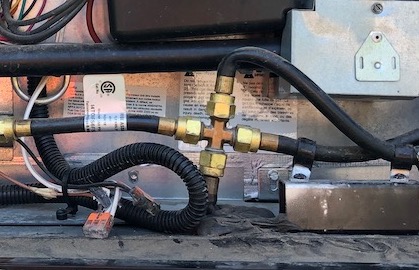 Before putting the new fridge in, I also lined the outside walls of the enclosure with Reflectix to add a bit of extra insulation.

Getting the new fridge in was a bit tighter as it was slightly bigger. After removing the doors, the biggest challenge was getting it around the island, but that only took a bit of pushing and shoving.  Once lined up with the opening it slid right in on its rollers. We did have to remove the trim piece above though as the new fridge turned out to be about 3/4" taller than the old one. Apparently the measurements didn't take the height of the rollers into account. We bent a couple of angle brackets and screwed them into the floor in front of the rollers to stop it from moving out. We also added 4 angle brackets at the back top and bottom to stop it from tipping. 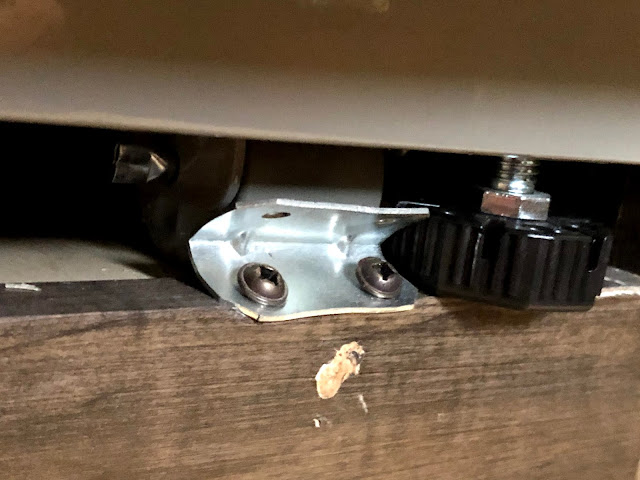 The final install test came when we pulled the slide back in. I knew it was going to be close but didn't realize quite how close! With the slide all the way in, the top of the freezer drawer handle stops about 1/16" below the bottom of the island counter top. I added a piece of fuzzy velcro under the counter to stop any chance of it rubbing. 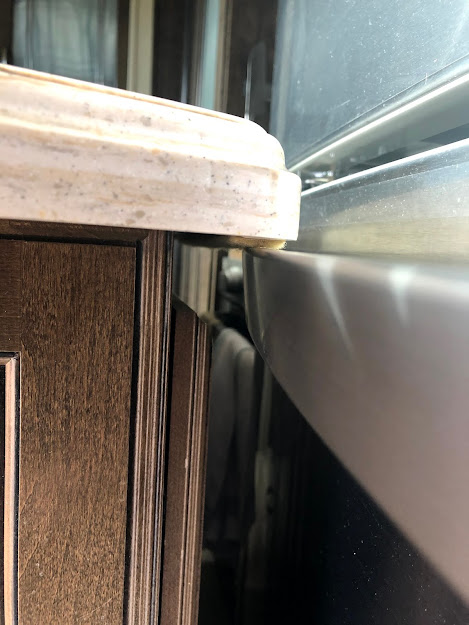 Now, one thing we did have to do is slide the fridge all the way back into the opening. We couldn't leave the recommended 2" behind without more extensive mods to the island. However, the cooling air exhaust from the fridge is right behind the bottom vent on the side of the trailer. I plan to seal it off and simply let the fridge vent through to the outside. I have placed a remote thermometer in this space and will keep an eye on the temperatures. If I have to make adjustments here I will. I have also sealed off the upper vent. 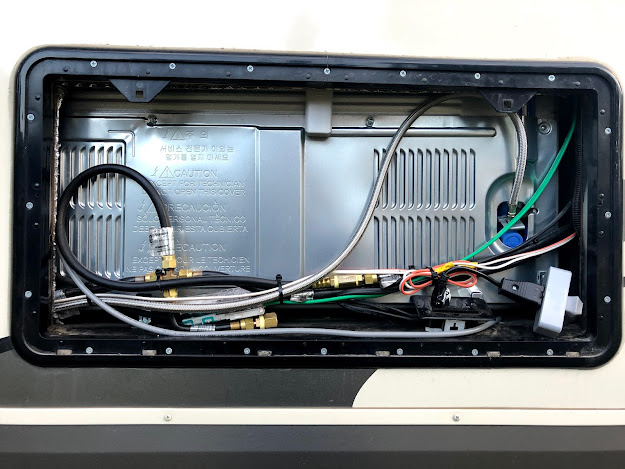 I still have some clean up here, especially with the gas line to the range and oven. When we did the install we couldn't get the right fittings to do a clean install so had to cobble together a solution using some extra parts the RV tech had. I also want to clean up the electrical a bit as well.

The new fridge is up and running and easily maintaining 1 to 2 degrees C in the fridge and -19/-20C in the freezer. So far temps in behind only seem to be running a few degrees above ambient. I’m still figuring out power consumption but so far it seems to use about 1.5 KWh/day or when on the inverter, less than 125 Ah off the batteries per day.
If those numbers are correct, our solar plant should have no trouble maintaining our energy levels.
As a comparison, if my math is correct, the old Norcold used approx. 21 KWh/day or approx. 1,450 Ah/day!

Yet to do is to finish the trim above the fridge and I also want to add a piece of trim below so you can’t see the rollers and clamps.

All in all, the install only took about 5 hours start to finish. 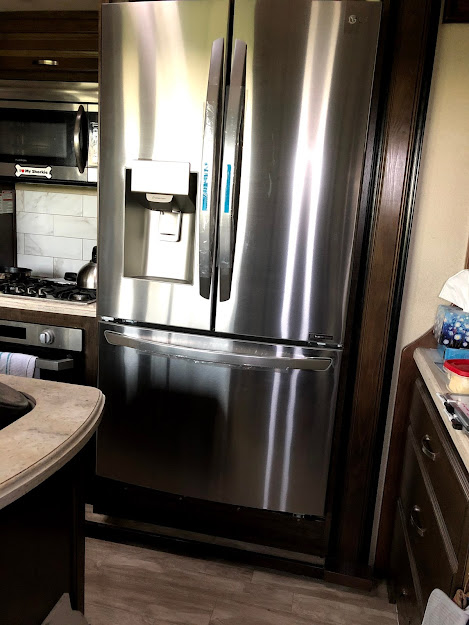 I am happy to say that we are still very happy with our new fridge. It has been maintaining temperatures very well. The only time we had any issue was earlier this month when outside temperatures got down close to -17C or around 0F. I noticed that the freezer temp was rising by quite a bit and the temperature in behind was getting quite low. I used a piece of reflectix to block off the outside vent and immediately the temperatures started to come back to normal.

We have also found that so far the energy consumption figures are if anything, better than advertised. We have been averaging between 30 and 35 kWh per month which should bring us in at about 400 kWh for the year. A fair bit less than the advertised 665 kWh and a hell of lot less than the 7500 kWh that the old Norcold used!

I was also able to clean up the plumbing and wiring in behind a bit so it looks much neater now. 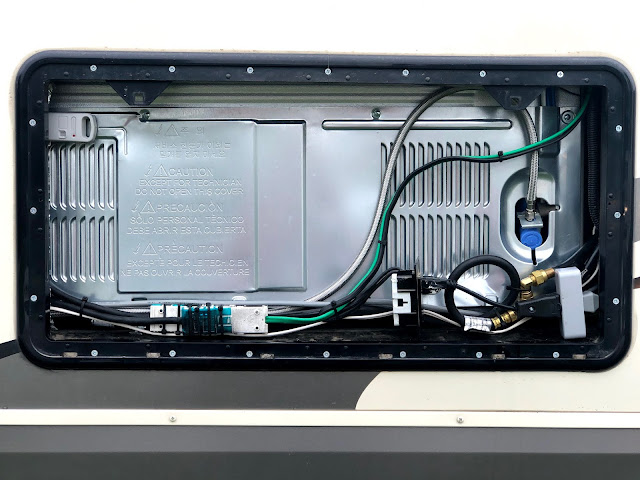