The Good, the Beautiful, the Bad and the Ugly!

While we were staying with Michael and Robin at their new place in Yuma, I offered to help repair a section of their patio that was damaged while they were parking their trailer.
I didn't get a full 'before' pic but the damage was considerable and required ripping up a 10' x 10' section and completely redoing it.  I have some prior experience with doing paver patios so dove right in.
The first step was to extract all the old pavers and salvage as much as possible. It turned out that about half the pavers were broken up to the point they were unusable.  Next was to re-level, repack and prep the area. That took a couple of days. 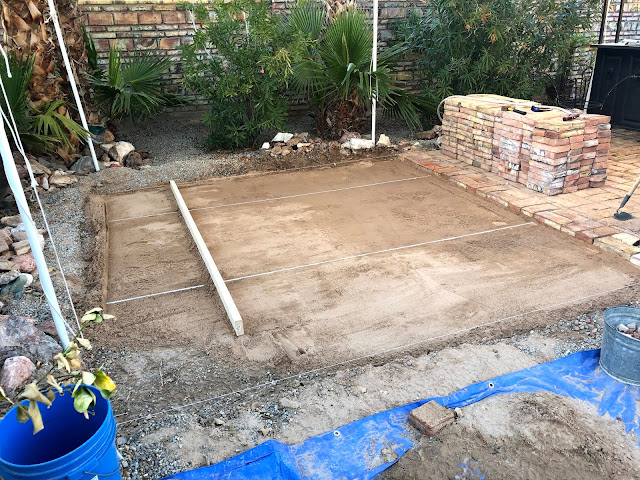 After this, we had to find a source of the original style pavers which, considering this subdivision and most of the brick and paver work is about 20 years old, was easier than we thought. We found a location in town that had lots of stock at a very good price.
Once the area was ready, laying the new pavers only took a couple of hours. A bit of work after that to seal it all up and clean up the mess, had it looking as good as or better than new. 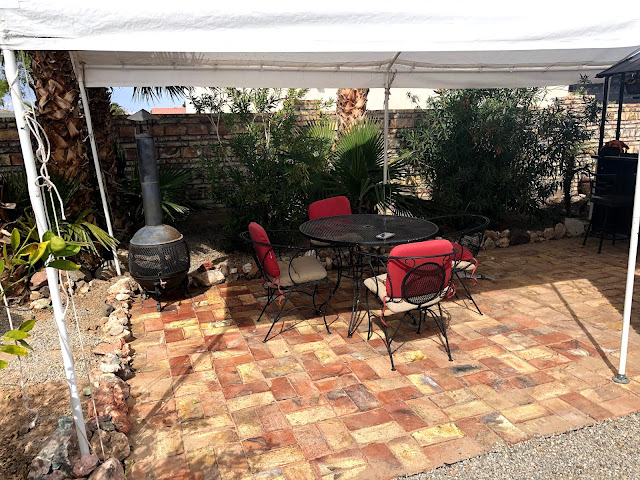 A quick side bar: After my last flight at the Yuma Aeromodelers Airshow, I noticed some damage to the bottom of the right wing on my jet. I contacted the importer and ordered a replacement set of wings which he shipped to us here.
Upon examining the damage, it became apparent how close I had come to losing the aircraft during the airshow! The wing structure was so badly damaged internally that any extra stress during flight would likely have caused a complete failure and a total loss of the aircraft.
This was the apparent external damage. 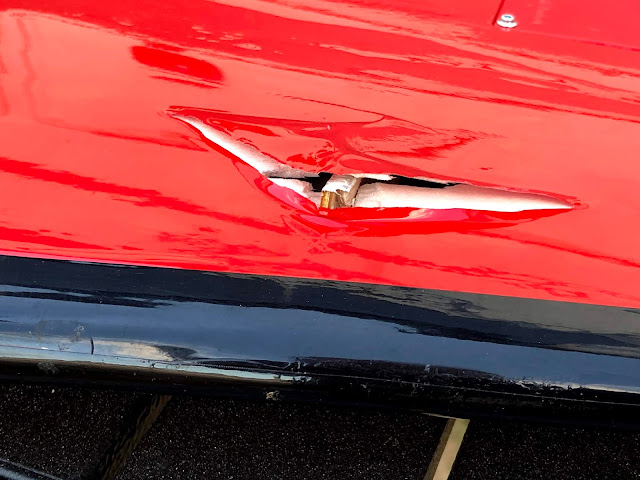 And once I opened it up, this is what I found. That black tube is all that holds the wing onto the aircraft. It was split in several places and the support ribs were fractured. As a result the wing had lost about 90% of its strength! The only thing holding it together was a thin 1/16" balsa wing skin. 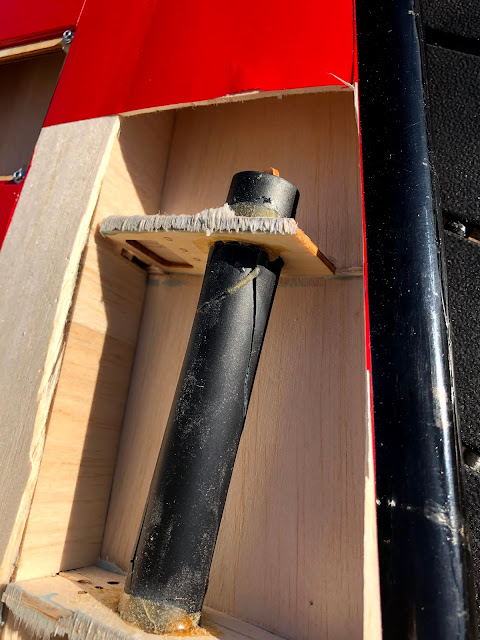 While we were here, we contacted the manager of the Pleasant Valley RV Park in Peoria and explained that we had been there before and that we were unable to find other suitable parking for a week or two. We managed to convince them to let us come back for a week or two and park in their dry camping area, so after spending a wonderful week with Michael and Robin, and after receiving my replacement wing set, we pulled out last Tuesday and headed East. It took us about 3 hours to get to our destination and once there, were set up in short order.
We have good friends who winter in Phoenix and on Wednesday, met up with them at the AMPS model club flying field where Paul is a member.
We plan on several more visits while we are here.

Now, you are probably wondering what is up with the title of this entry.

The Good is that we are again able to spend a couple of weeks here in Peoria.

The Beautiful is that spring is here! The desert is again starting to green up and flowers are blooming. There are many Brittle Bushes that are in full bloom again. 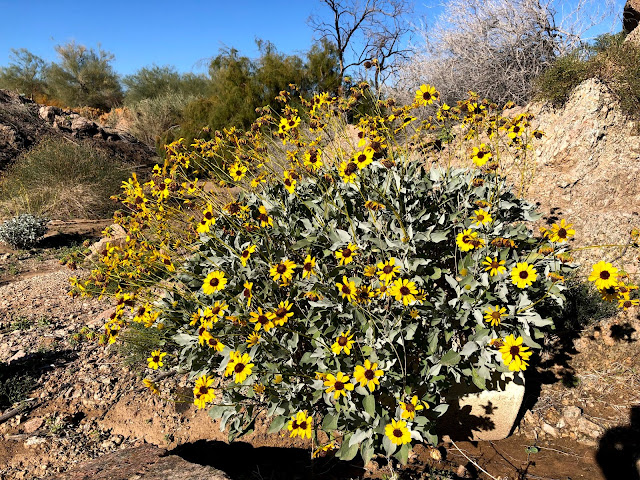 Also along the roadsides are many of these which I believe are Desert Globemallows. 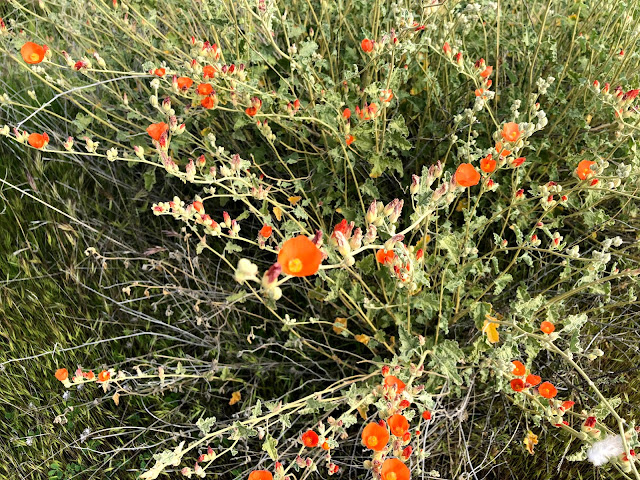 And these Desert Marigolds. 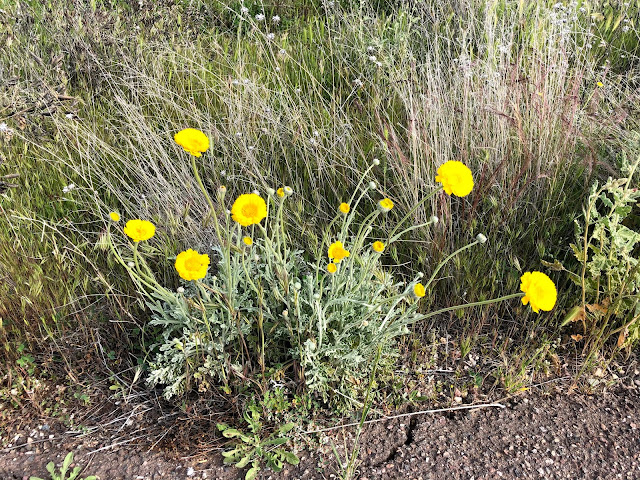 Another beautiful aspect of this area is the regular appearance of a number of gentle giants. 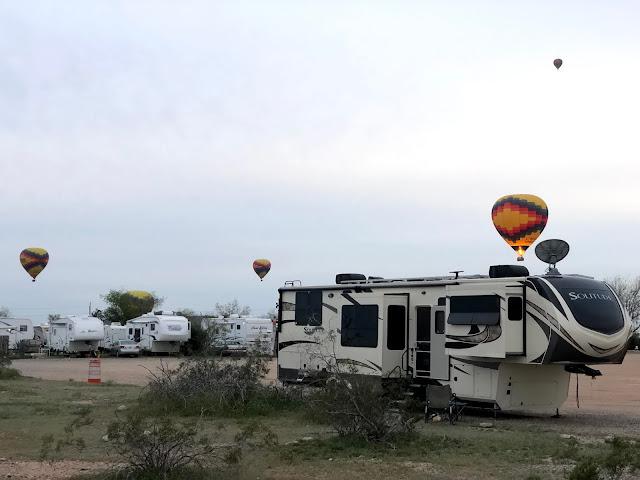 We see these quite regularly if the weather is suitable. Sometimes they come quite close as they did yesterday, landing just across the road from us. There is a company in Arizona, Rainbow Ryders, that flies regularly in the area. Yesterday there were about a dozen balloons that flew in just before dusk.

Now the Bad. I don't know what it is with people, but we see this quite often. Shotgun shells and bullet casings just dumped in the desert. Why can't shooters at least clean up their empties? 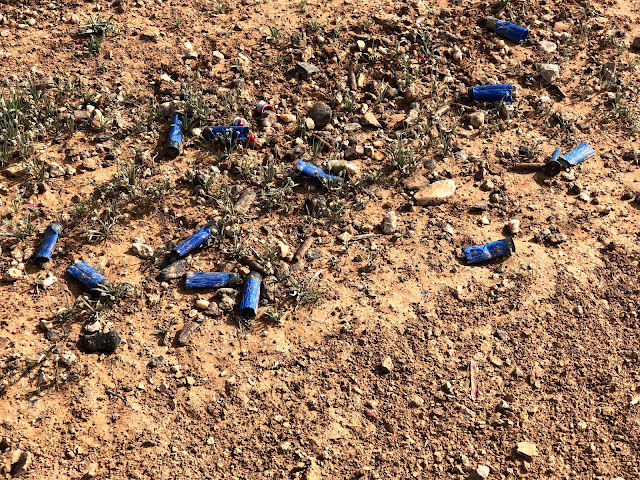 And if that isn't bad enough, then there is the Ugly.  Out walking Maya the other day, I came upon this about a half mile from where we are parked. 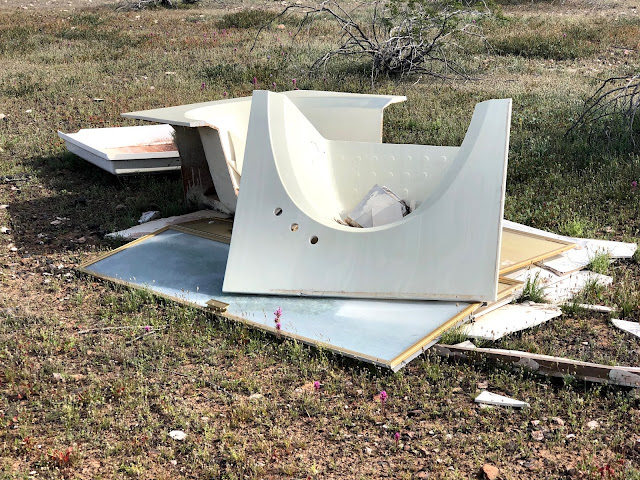 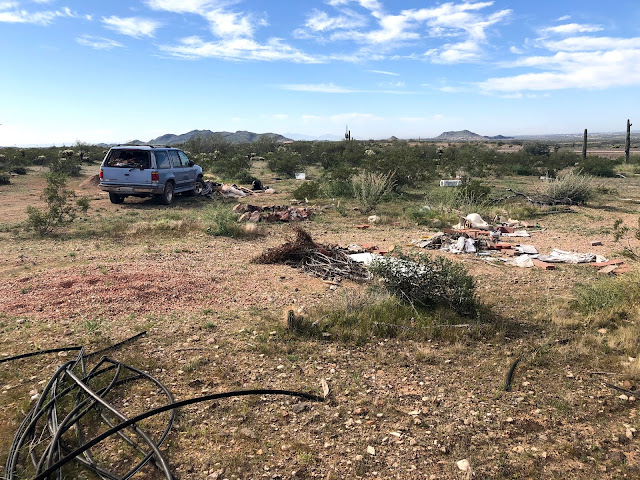 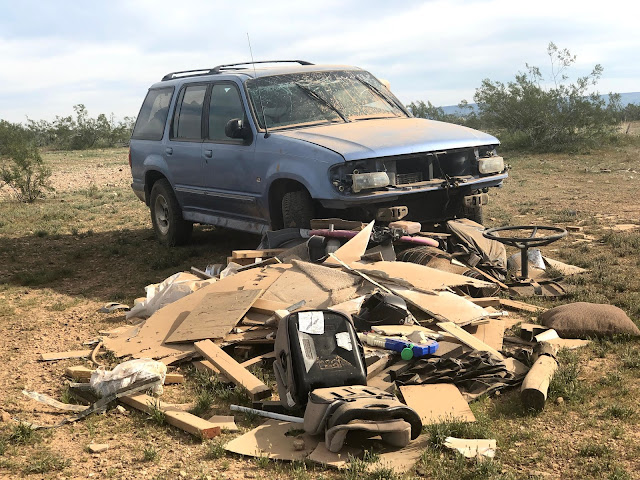 I have no words for this except perhaps, disgusting!

We had planned to possibly head further East and spend a bit of time in New Mexico before heading North this year but now I think we will just head North from here. I am still unsure exactly what route we will take as that will depend on weather forecasts but we ultimately plan to cross back into Alberta around the end of March.  Stay tuned.
Posted by Rob and Chris's travels at 11:26 AM