Before leaving Yuma, I was able to get a replacement wing panel for my Elan and on Sunday, met my buddy Paul at the AMPS club field in Phoenix and got a few flights in. The weather was perfect and it was a very enjoyable day. 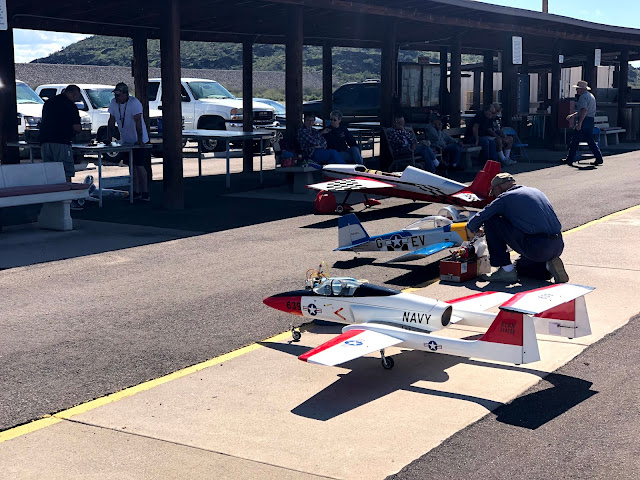 The next day, Monday, we spent getting the trailer ready for the road as we had heard that our Canadian government was telling all Canadians to get home due to the COVID-19 virus outbreak. This was about 10 days earlier than we had originally planned but felt we should probably heed the request.
As a send off, Arizona gave us another one of its beautiful sunsets. 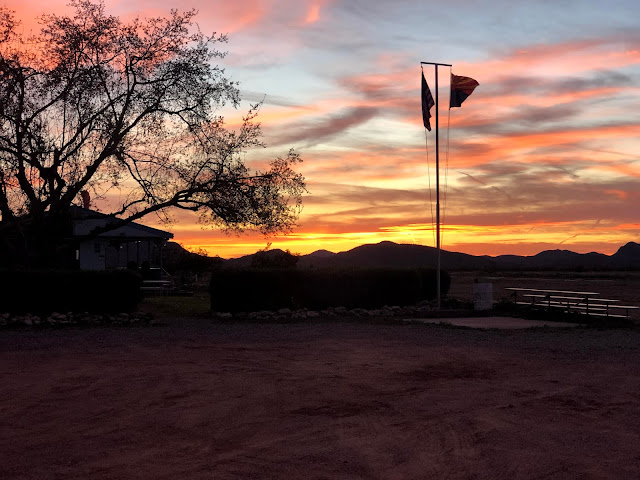 Our plan was to leave Tuesday morning and head for Las Vegas and get as far as we could the first day. As it turned out we made it about an hour north of Vegas to Mesquite. We spent the night at the same Walmart we stayed at on the way down.

Before I carry on, let me back up a couple of months for a minute. Back in December I had heard of a company (TDS Logistics) that was offering discount prices for diesel fuel to RVers. The company is a fairly large trucking company that is able to negotiate special pricing on fuel at some major truck stops. They use a 3rd party payment system and provide their customers with a card that works in the pumps in the truck lanes at most truck stops. They have decided to offer their arrangement to RVers as well. It seemed a bit too good to be true at the time so I just filed it for the time being. Fast forward to Boomerville in January and there were a couple folks there that had signed up. They had used the program a couple of times and it all seemed to work as advertised. I looked into it a bit further and while it still sounded very interesting, there were a couple of stickler points for us. Mainly the fact we wouldn't be able to receive their payment card as it would be mailed to our address back in Canada and as far as I could tell at the time, was required to be able to activate the pumps. Fast forward again to the beginning of March and I found out that as long as we knew the number on the card, we could link it to a Loves (one of the major truck stops in the US) rewards card and I could use that to activate the pumps.
Anyway, I decided to give it a go. I filled out their application on-line and then gave it a week to let them process the application. I then contacted them and was able to get the number. We then made a trip to a Loves in south Phoenix to pick up a rewards card. I should add that there is an app for smart phones where you can see where the discounts are available and what the discount price will be.
The first time we used it was at the Loves truck stop in Kingman, Az.  If I remember correctly, the posted pump price was $3.04.9 / gallon. Using the TDS program, we paid $2.19 / gallon. That's almost a 30% discount!

Anyway, back to the story. After getting parked in Mesquite, we ventured into the store to see what was left. Not much! There were no paper products, almost no canned fruits or vegetables, the meat racks were virtually empty and basic staples like flour, sugar, rice, etc. were nowhere to be found. We really weren't desperate for anything so weren't too worried but there were a couple things we would have liked to stock up on a bit.
The next morning we were both up fairly early and decided to head over to the store again just before 6. There was a line at the door but we got in fairly quickly. We wanted to pick up a couple more packs of TP so I headed there first. Chris went over to the meat section and picked up a couple of items there as well. We found a couple of other items then headed out. After we went through the checkout and just as we were about to leave I spotted a cart with a bunch of hand sanitizers on it. They were limiting these to 2 per customer and as we didn't have any, we picked up a couple.
We carried on and made our next stop at Perry, Utah, just north of Salt lake City. At this point, our plan was still to cross into Canada at Coutts, Alberta, leave the trailer in Calgary for some warranty work and drive to Vernon.  On checking the weather, it looked like it was going to get damn cold on the east side of the Rockies so we decided to turn west and cross into BC at Osoyoos instead.
After an uneventful trip with stops at Boise and Wenatchee, we crossed into Canada Saturday morning and are currently hanging out at the Real Canadian Superstore in Vernon.  We hope to be able to stay here for our 2 week self isolation and then get back to a somewhat normal life for a while.
We don't know what is happening with regard to our summer camp hosting job at this point yet but hope to find out fairly soon.
Oh, and after using the fuel discount card 6 times on the trip home, we saved almost $168 off the posted pump prices, about 40%. If you drive a diesel powered RV in the US, I recommend you check out the program. There are also a few stations here in Canada that do offer a discount as well although not to the same extent as in the US. As far as I can tell it seems that these are the Petro Canada truck stops.
If you do decide to apply for the program, please consider adding me as the referer on your application. If you do, I will receive a small credit from TDS as a thank you.
Posted by Rob and Chris's travels at 8:22 AM