After leaving Craters of the Moon, we headed to Jerome. We have friends who live in Twin Falls which is just across the river. We had stopped here on the way north last spring and wanted to stop again on our way south. Leaving Craters we drove through another good snow storm however fortunately nothing was sticking to the road and we made it to Jerome without issue. This time we decided to overnight in the Walmart which worked well. Monday we ran a few errands in Twin Falls then met up with Eric and Suzanne for a nice visit then carried on to Thatcher and a visit with another couple we originally met 2 years ago, Vince and Wendy.
They have spent the summer on a piece of property owned by Wendy's daughter and son in law. They also had a spot for us with a power connection which was nice. We spent another nice afternoon and evening visiting with them. They have a beautiful spot overlooking the valley. 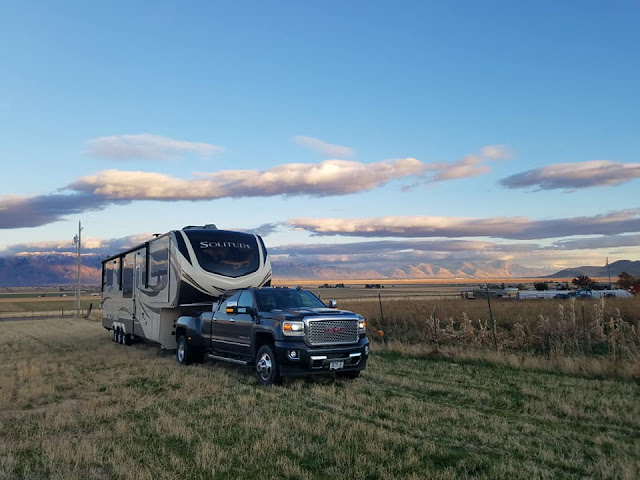 The next morning we carried on. We will meet up with Vince and Wendy again in 10 days or so. This leg took us as far as Mesquite, NV. Again Walmart provided us a place to spend the night.
Wednesday it was onward. Our next stop is Grand Canyon National Park.
This turned into another fairly long day. I believe our travel time was about 6 and a half hours. We took highway 93 and I-40 between Vegas and Williams. The only comment I can make here is that it isn't the greatest road for towing. While it is a divided highway for most of the distance, it is in pretty rough shape. Rough being the operative word!
We arrived later in the afternoon with a pretty good idea of where we wanted to stay. There is a short gravel loop road just south of the main park gate where boondocking is allowed. There are only about 2 spots that would be suitable for us but luckily we were here early enough and managed to get the best one. It was a bit of a tight squeezing between a couple of pine trees but we managed to get in OK. 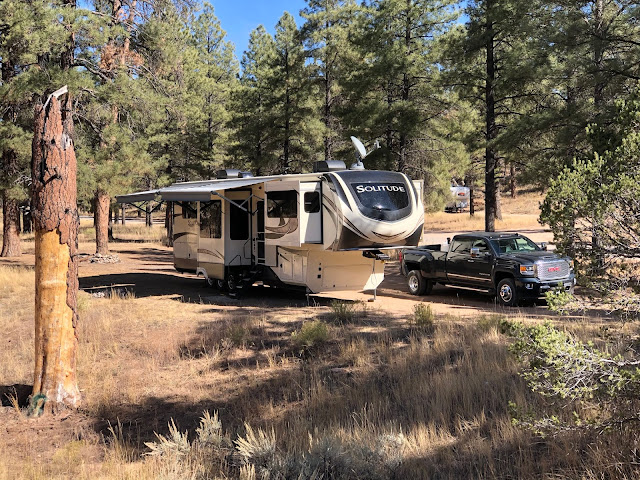 We even managed to get enough southern sky exposure to get the dish up and locked onto the Shaw satellites.
After setting up we didn't go anywhere Wednesday except the info centre in Tusayan where we grabbed some brochures.
Thursday, we headed into the park and made our first stop at the main visitor centre on the south rim. After spending some time there we walked up to the rim at Mather Point for our first glimpse of the canyon. 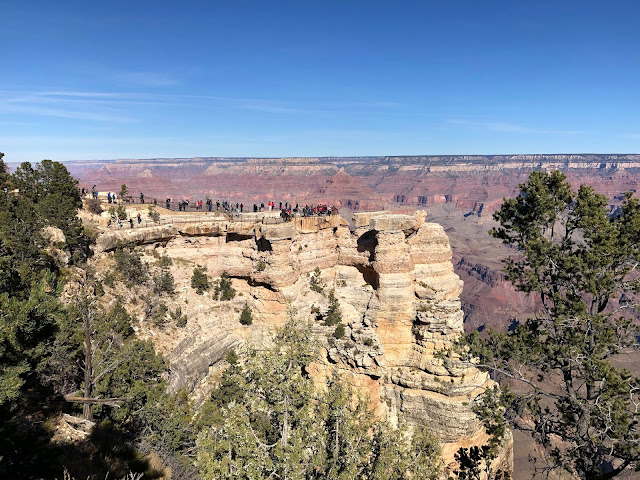 There is a very good, paved path along most of the south rim in the park so from here we just wandered around a while and took in the sights. 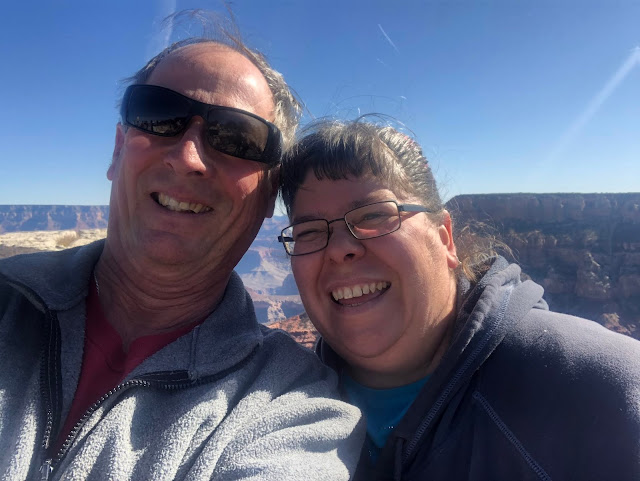 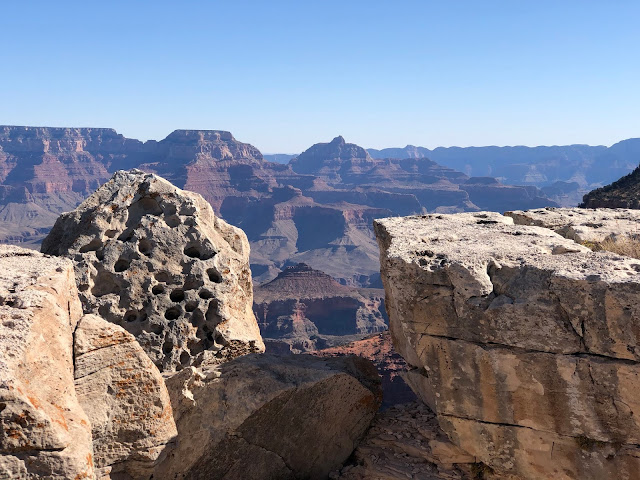 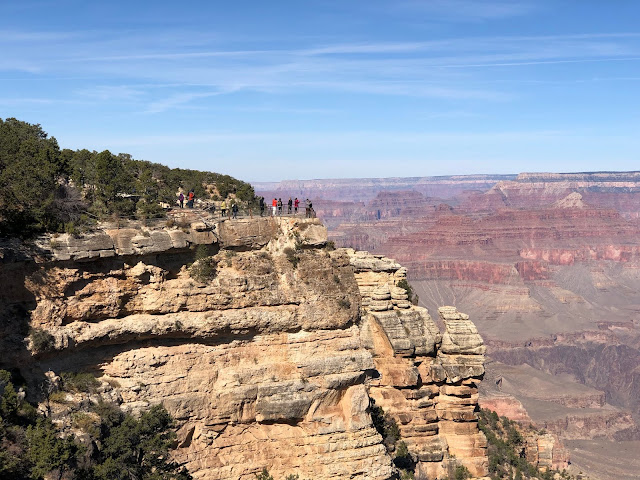 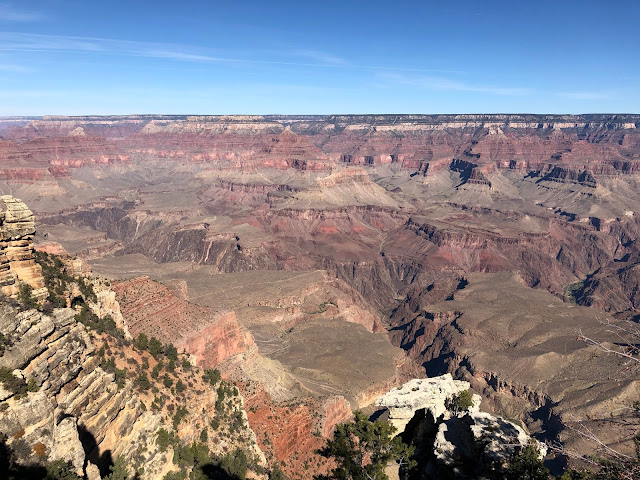 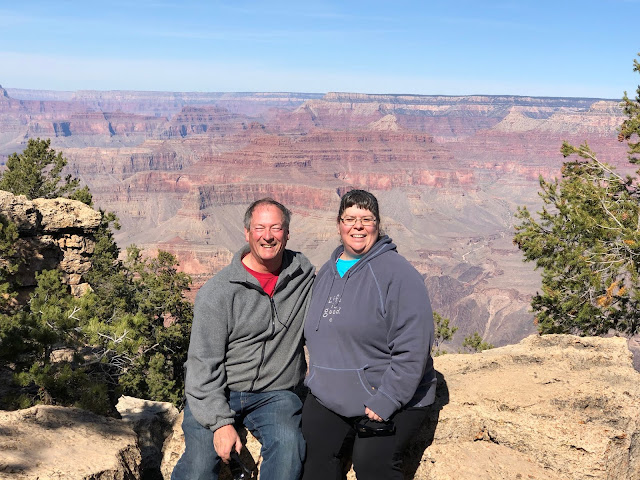 Even this late in the season, there are a surprisingly large number of people around. We got in fairly early so at first it wasn't too bad, but a bit later it started to get a bit difficult to get 'guard rail' time to be able to get photos. 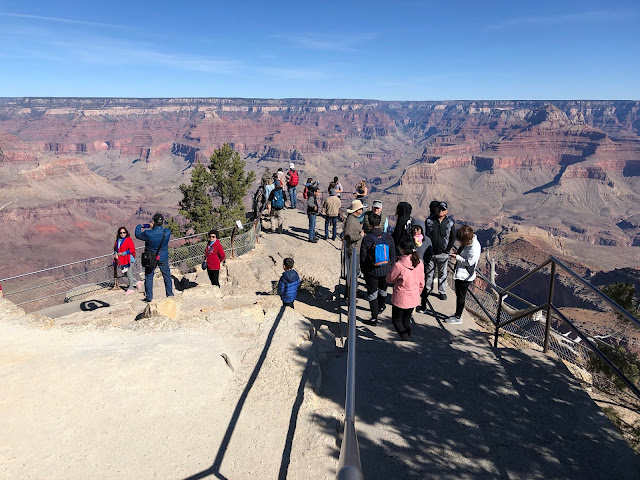 This was early on. Later on it started to get quite crowded in places.
The weather on Thursday was a bit cool and there was a good breeze blowing but full sun so wasn't too bad. The days high was only around 10 or 11 or so.
The south rim is about 7,000' above sea level and both Chris and I were noticing the altitude. Especially when climbing uphill! Nothing serious but it was noticeable.
Friday, we headed to the East end of the park and spent some time exploring around the Desert View Watchtower. 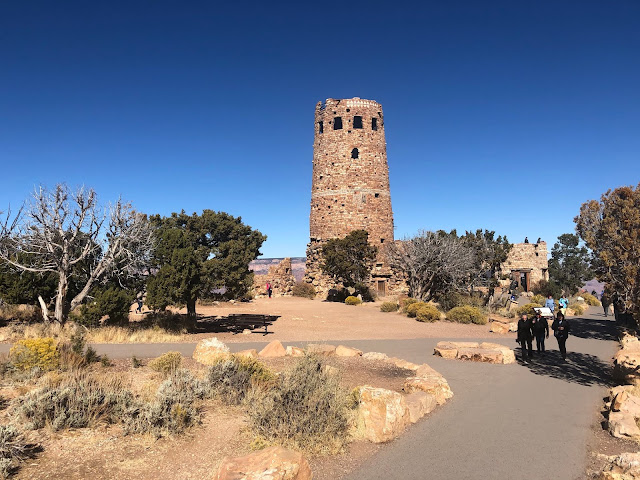 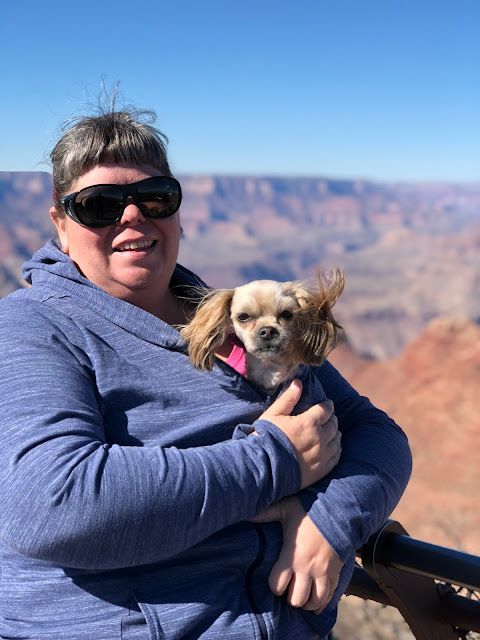 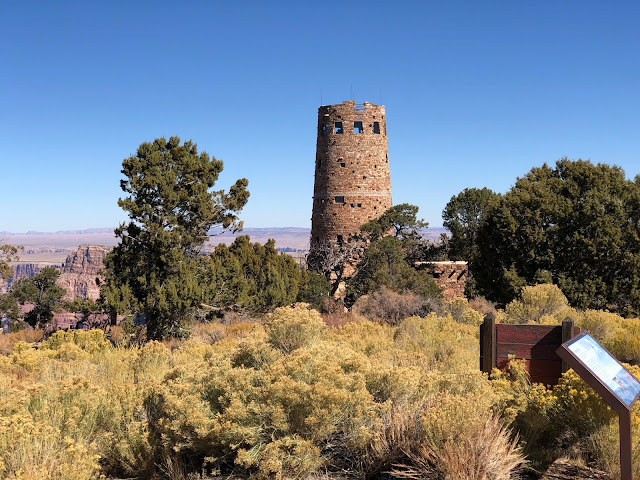 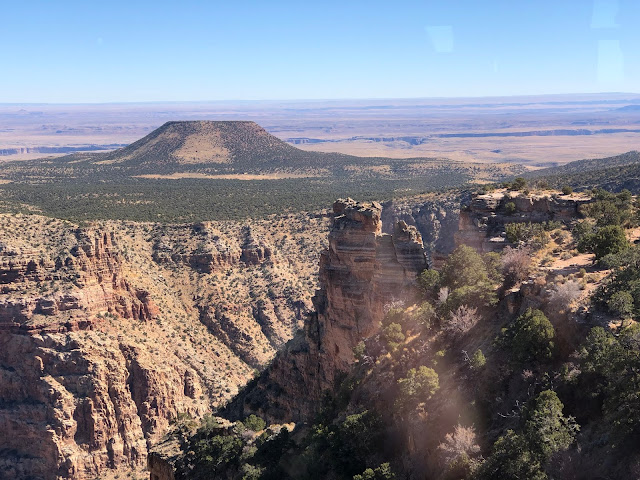 There aren't too many areas in the park where you can see the Columbia River that created the canyon, but this spot has a pretty good view of the river. 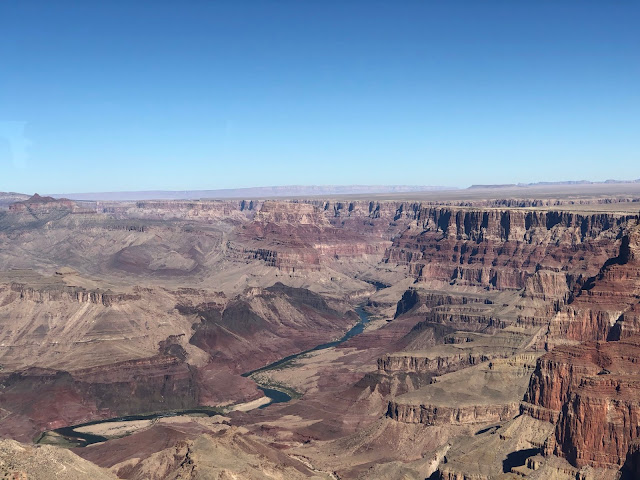 Up until now we have been doing our sightseeing in the middle of the day. Later on Friday we went back to see what the difference would be with afternoon lighting and waited around until the sun set. 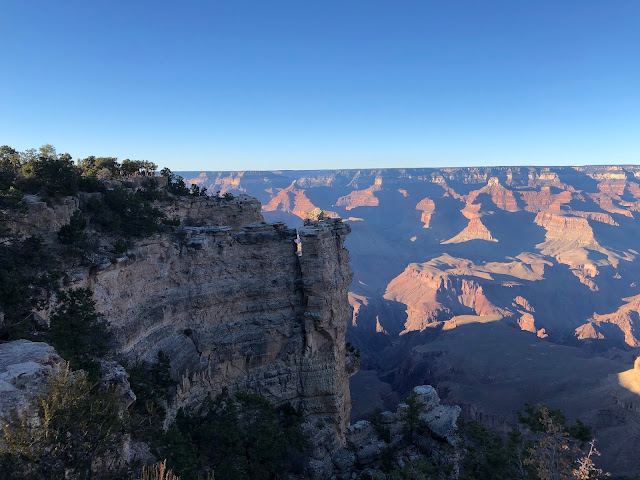 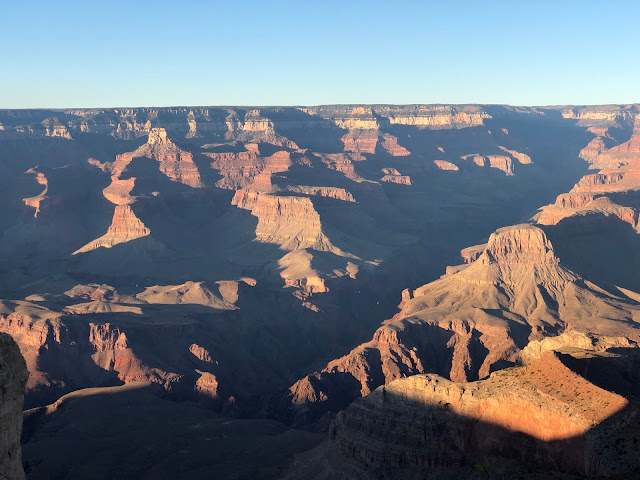 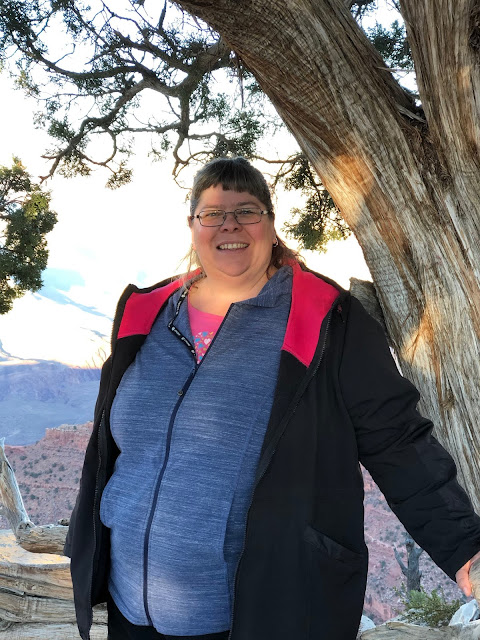 Even after the sun had set, the change in lighting was quite spectacular. If anything some of the colours were even more vibrant. 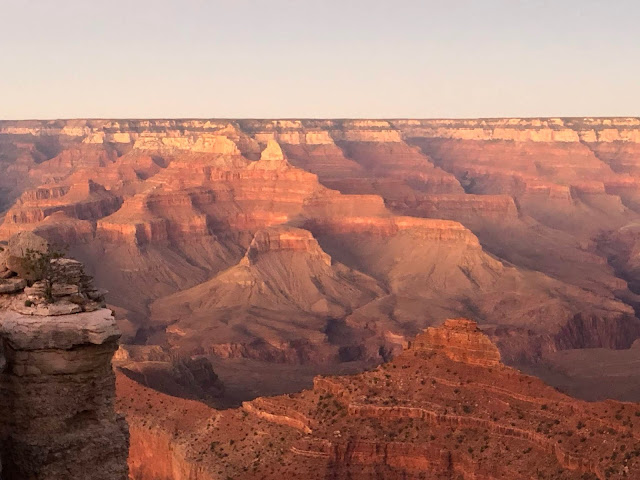 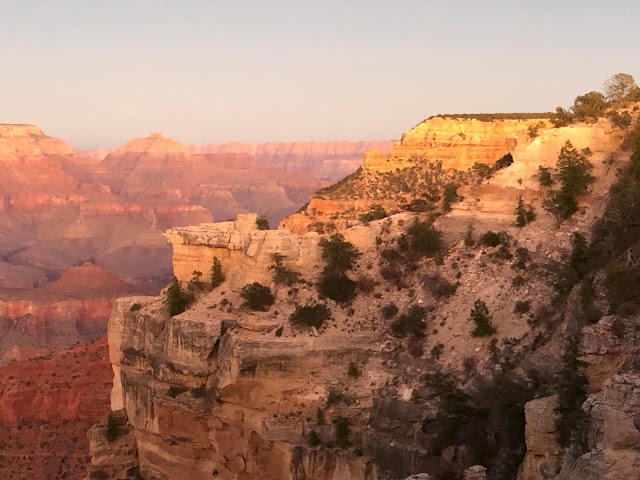 While this is Chris's first time here, I was here back in the 70's with my family. While I don't remember too many of the details, I do notice a lot more development this trip. Also a lot more people. Not that that is a bad thing. Some of the interpretive displays are more informative than I recall as well.
Anyway, this has been a pretty long post. We are here for one more day, then on to our next stop.
Posted by Rob and Chris's travels at 8:14 AM