Craters of the Moon

We left Kamloops on Oct 12 and made our way to Vernon where we parked the trailer for a couple of nights at the Real Canadian Superstore. This was the last chance we would have this season to see my Mom and Chris’s parents so I spent Saturday afternoon visiting with my Mom while Chris was at her parents catching up on some laundry. It is always nice to spend Thanksgiving with family and Sunday everyone gathered at over Chris’s parents. We were joined by our good friend Laura from Kelowna as well as my brother Ken. Chris and Marilyn cooked up a wonderful meal of ham, scalloped potatoes, veggies and, for desert, what else but pumpkin pie.
Monday morning we pulled out and officially began our winter travels.
Our first planned stop was just south of Calgary in Okotoks, Alberta. We took Highway 1 and were a bit concerned about the weather crossing the mountains but that part of the trip was a piece of cake. We did run into a pretty heavy snow shower around Kananaskis which lasted for about 20 or 30 Kms but fortunately it was warm enough and the snow wasn’t sticking so wasn’t an issue. We pressed on and arrived in Okotoks about 6PM.   I will expand on our reasons for this stop in another entry another day.
Tuesday we pulled out and headed south. Our goal for the day was to get across the border at Coutts, AB and if possible, get as far as Great Falls, Montana. The roads and weather, with the exception of some fairly strong headwinds, were good all the way. We crossed into the states about 1PM with no issues and made it to Great Falls by mid afternoon where we parked at a WalMart. Of necessity, we crossed the border with minimal grocery supplies, especially produce, so replenished those in the store. We also met an Alberta couple who were parked beside us and spent a bit of time chatting with them. They were also on their way south for the winter and spend most of their time in Yuma. We traded contact info and may connect up with them when we are in that area later.
Wednesday was another driving day and we pushed on to Idaho Falls, ID. I-15 through this country can be a long tedious drive. It is quite high, sometimes exceeding 6,000 ft for long stretches and quite sparse. At least the road is in good shape so makes for an easy drive. We still had quite strong headwinds most of the way which is causing us to use about 20% more fuel than the norm. You could tell that they had had quite a dump of snow about a week earlier as there was a lot of it left along the shoulders in places as well as in the fields along the highway.
So far the days have been quite nice; sun and cloud mix with temperatures in the mid teens during the day but getting chilly at night. Pulling into Idaho Falls though it was getting quite warm. I saw 23C at one point and it was still in the mid teens when we went to bed.
Our goal for this first part of our trip was to make it to Twin Falls, Idaho where we were planning to meet up with some friends we had met on our first trip south 2 years ago. We also stopped here on our way home last spring. They had had a last minute change of plans so they could go on a hunting weekend with their grandson so we decided to take a couple of days and detour via the Craters of the Moon National Monument and Preserve. It was only a short detour and sounded interesting.
Craters of the Moon is an area in Southern Idaho that has had recent (geologically speaking) volcanic activity. It got its name in the 1920’s after a geologist of the time described it as “The surface of the moon as seen through a telescope”. There is a volcanic rift (The Great Rift) extending some 50-60 miles northwest to southeast cutting across the Snake River valley. Covering this area are large lava fields and old cinder and spatter cones. The volcanic activity started here only 15,000 years ago and was actively erupting as recently as 2,000 years ago. This area is a remnant of a magma plume or hot spot in the earths mantle that is currently under Yellowstone National Park. Scientists are fairly sure that this area will see activity again in the future. 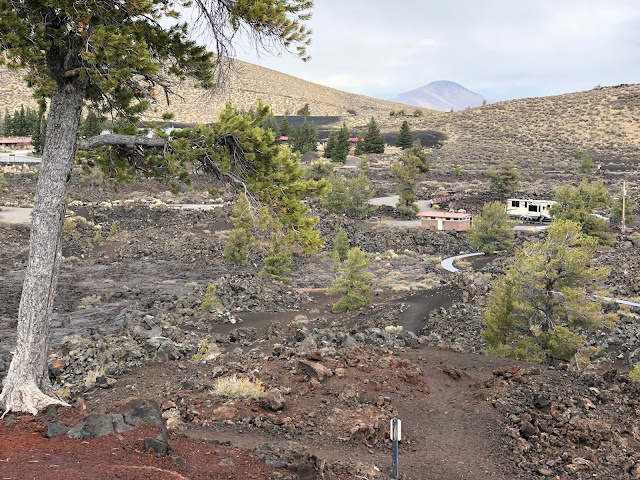 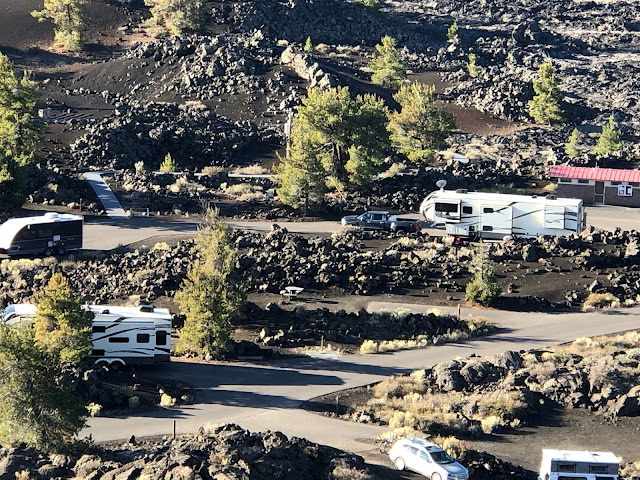 The campground here is built amongst the lava flows. It was built quite a long time ago when RV's were quite a bit smaller. It was a bit tricky getting our big beast around some of the tight turns in the park. 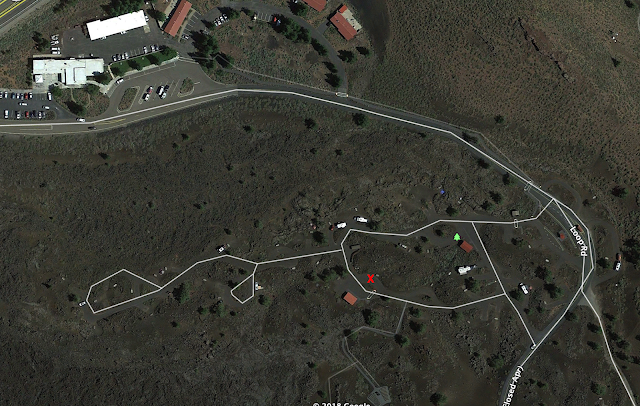 This is the Google Earth shot of the Lava Flow campground. The site we had is marked with the red X. 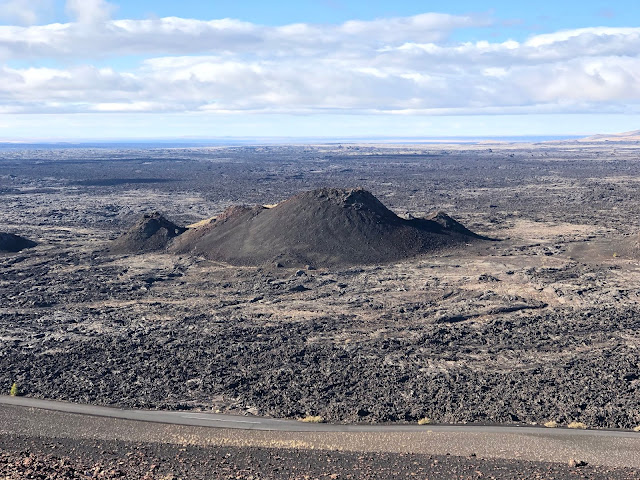 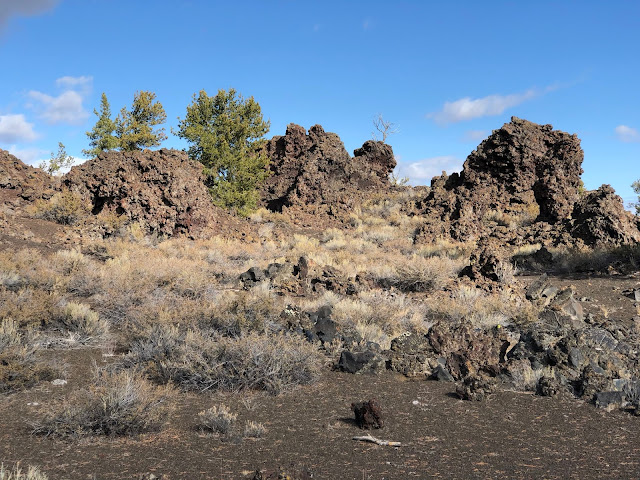 Being we are still at about 6,000 ft, despite being sunny for the most part, it has been cool with daytime temps only around 10C or so and dropping to freezing at night. Also during the day it has been quite windy which is the norm here apparently. We spent a couple of days here at the campground but the forecast for Sunday is a change in the weather and more snow, so we will move on. Next stop Twin Falls.
Posted by Rob and Chris's travels at 4:55 PM