Our first week in the new rig

Well, we've been in our new rig for a week now and are starting to feel more at home. We are still finding a few minor things that we will need to attend to but mostly stuff that I can take care of easily. Nothing major so far thankfully.
I have been planning out what I want to do in the garage to make it a more efficient storage area for my models. At this point everything just sits on the floor and I am using foam blocks to help keep things from moving around. 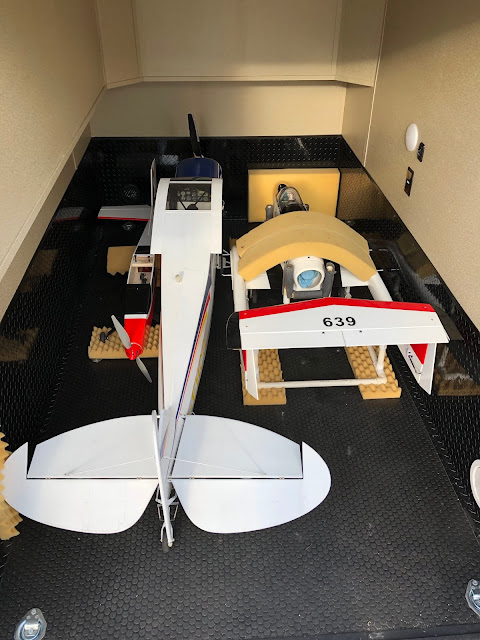 I need to create some form of wing rack likely suspended from the ceiling and a way to tie things to the walls. I want to be able to keep my toolbox and fuel jugs in here as well and I can't have them moving around when we are traveling.

Since we brought the new rig back to Kamloops almost a week ago now we have had a lot of rain! I can't remember the last time the forest fire rating for the interior was Low at this time of year. It is usually High or Extreme by now. Don't get me wrong, this isn't a bad thing. We need the rain badly!

Before leaving for Edmonton 2 weeks ago, we offloaded quite a bit of stuff from the old trailer so when we got back we had to load most of it back into the new rig.
All the way back I was wondering if I would be able to get the new trailer into the driveway at the house but as suspected, it is too long. The skids under the rear bumper hit the ground before the wheels even reach the slope. We still had a bunch of organizing to do and wanted to keep it close to the house so wound up parking in the cul-de-sac as far into the driveway as I could get it. It really stuck out and if Kamloops Bylaws had come by, I am sure we would have received a ticket or at least been told to move it. We had checked with the neighbours ahead of time and they were OK with it so we weren't too worried. We spent 2 nights like that before pulling out and heading to the Kamloops Tournament Capital Ranch.
One of the other model clubs in town uses this as an event site and they have a fun fly on this weekend. So far, there are 9 or 10 rigs here and a few more expected to arrive today. 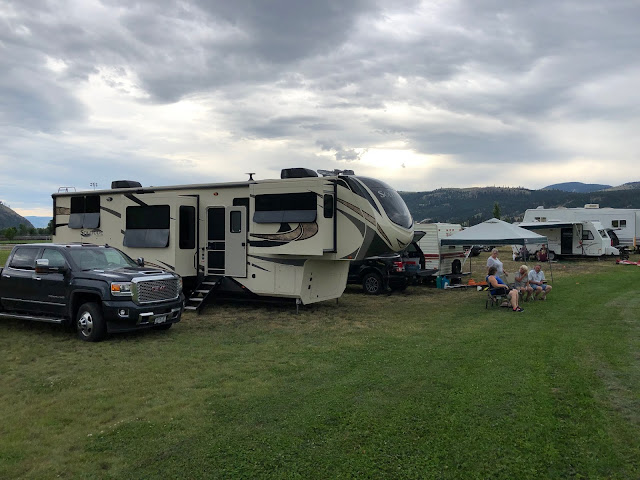 Still raining this evening. Hopefully tomorrow will be a bit better so we can get some flying in at least.

Posted by Rob and Chris's travels at 8:21 PM