We had originally planned to leave Mittry on Thursday morning, but heard at the last minute that friends we had spent time with earlier were going to be back at Mittry on Thursday afternoon, so we decided to hang around for one more day. Don and Glenda arrived right around mid day and as we were catching up with them, we learned that some other Boomers were at an RV park just up the road. We all headed over there for an impromptu Boomer happy hour at 4. A good time was had by all and we headed back around 5:30. After we got back some other neighbours across the road invited us over to their camp for a while. We didn't get home from that one til 8:30 or so. I think I'm beginning to like this lifestyle!
Friday morning after saying our goodbyes to Don and Glenda, we headed off. A quick stop in town as I wanted to pick up a second Canadian flag and then we were off, headed North to Quartzsite.
We made a stop to dump our holding tanks and refill water at the RV Pit Stop then carried on to our next planned stop.
There is a gathering of Escapee Boondockers (a group similar to the Boomers) at Mile Marker 11.5 on Plomosa Rd. This is a few miles past the Boomerville spot where we spent most of January. We had met a few of them way back at Thanksgiving in Borrego Springs and wanted to reconnect with them and meet some new people as well. When we arrived we found about 20-25 rigs and quickly found a good spot to get set up.
They usually do a happy hour at around 3PM but Friday was very windy, so the gang decided to go into Bouse for fish-n-chips instead. Bouse is a small town only about 10 miles further up the road. The food was OK and it gave us a chance to get to know some of the gang a bit better.
Saturday, Chris wanted to do some laundry, so she headed into Quartzsite. I took Maya for a short walk the struck off on my own for a little while.
Now that spring is here I am on the lookout for anything new. I am particularly liking all the wild flowers out here. 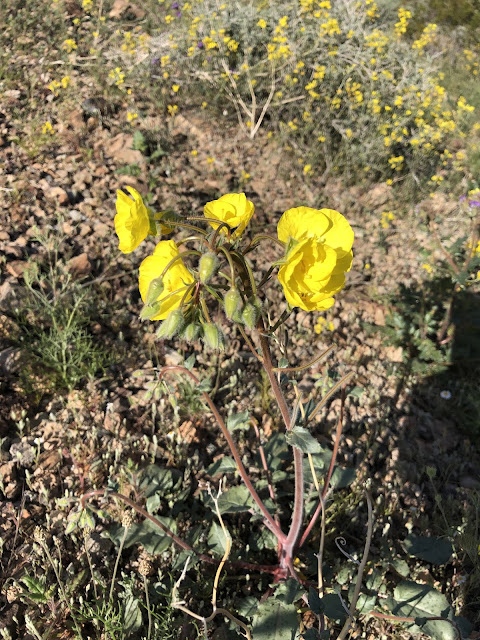 I'm not sure what this is. Maybe some variety of suncup? 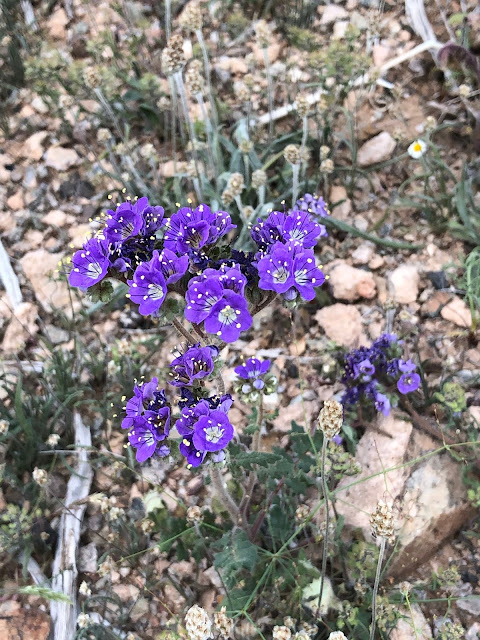 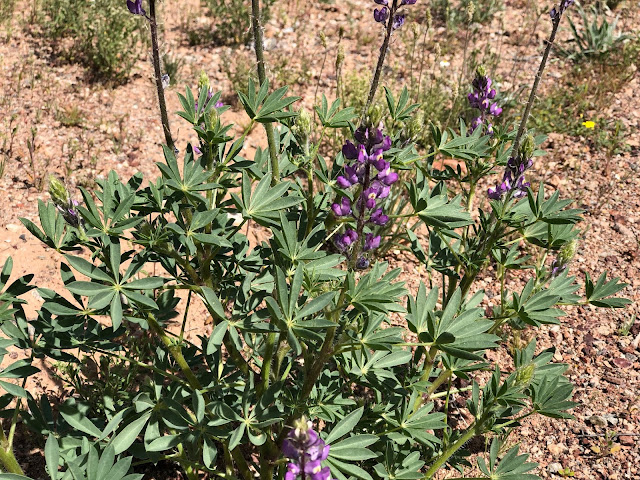 These Arizona Lupines are also very common around here. 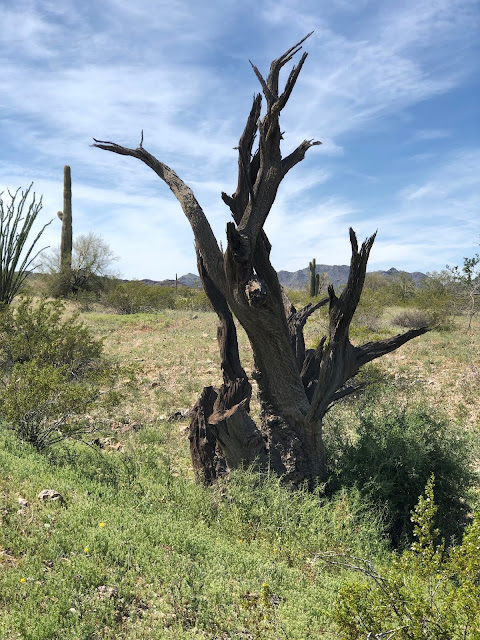 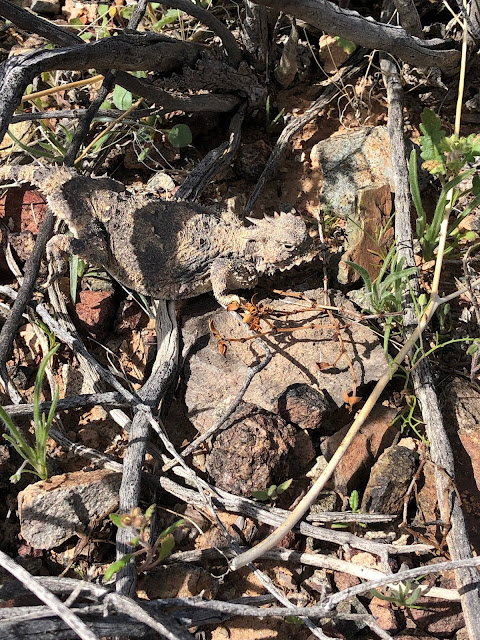 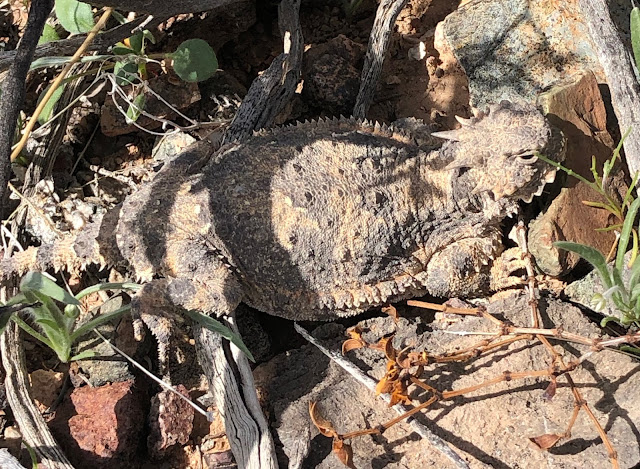 Here is another shot a bit closer. 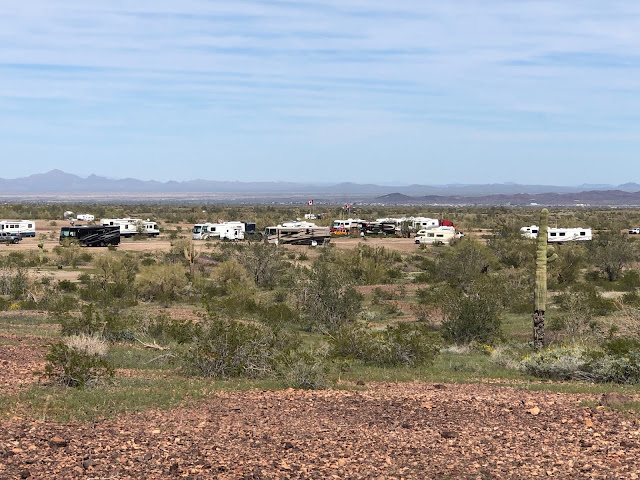 We are the rig flying the Canadian flag right in the middle in behind the brownish motor home. 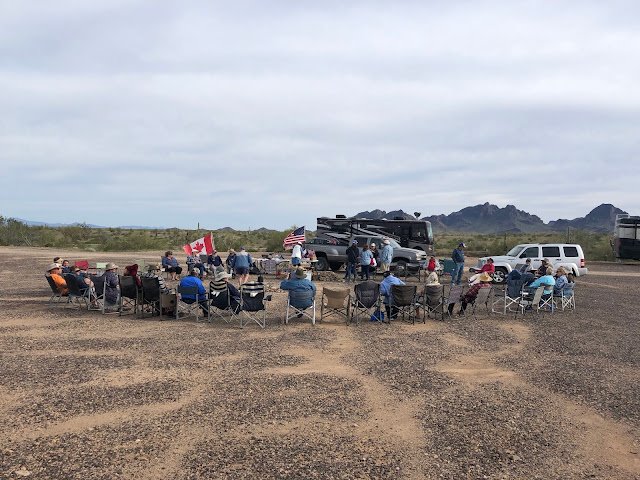 This is the Boondockers gang around the fire circle for Happy Hour.
Posted by Rob and Chris's travels at 4:50 PM