Hanging out near Joshua Tree NP

We pulled out of Death Valley last Monday and headed further south. Chris and I had planned to spend a week or so at a spot we found on our first trip down 2 years ago. A BLM area just outside the south entrance of Joshua Tree National Park. This time, 2 others we had spent time with at DV decided to join us; Vince and Wendy and Rick and Janet. After dumping our tanks and filling water we were on the road about 9:30 or so.
We retraced our steps back to Death Valley Junction then turned south on CA-127 following it to Baker where we stopped for lunch.
In Baker, there is a Greek restaurant right at the junction with lots of parking. 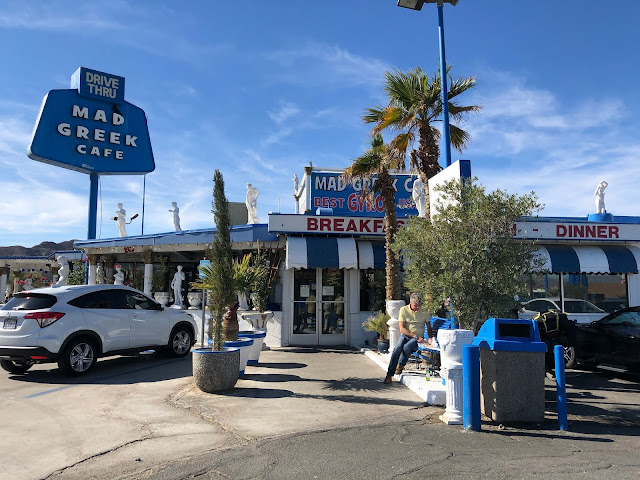 While not quite 'fast food', it's not quite a normal restaurant either and the food was quite good. I had the fried Calamari which was among the better I have had. Everyone else was also pretty happy with their orders although Chris's was a bit on the slim side. Definitely would stop here again.
After lunch, we continued south on Kelbaker Rd and our next stop, the ghost town at Kelso. This little town owes it existence to the railroad. It began in the early 1900's as a water stop on the main line between Los Angeles and Utah. Today there isn't much here other than a railroad siding and the old station that has been restored and turned into nice little museum. 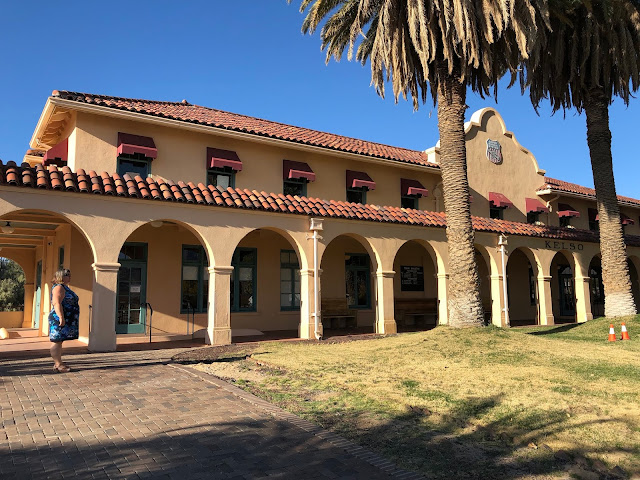 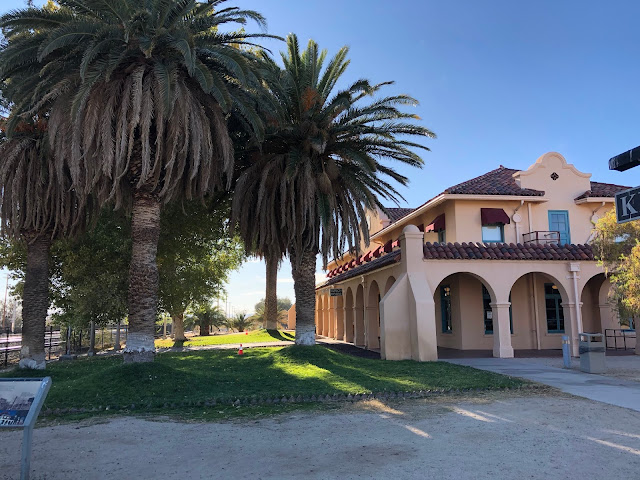 We probably spent an hour or more here exploring the museum and grounds before continuing on to our stop for the day at Amboy.
Amboy is another California ghost town. This one owes most of its current existence to the historic Route 66. Today there isn't much left except an old gas station and many deserted buildings. The last census shows a population of 4! 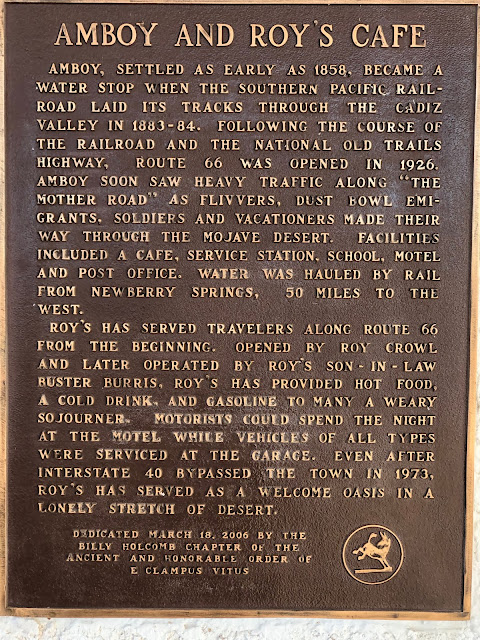 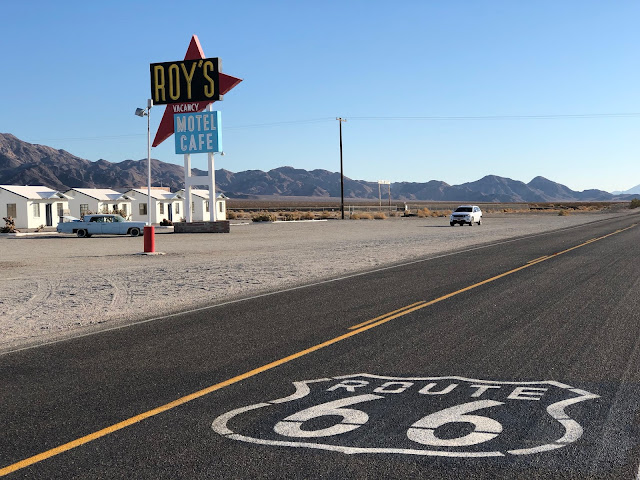 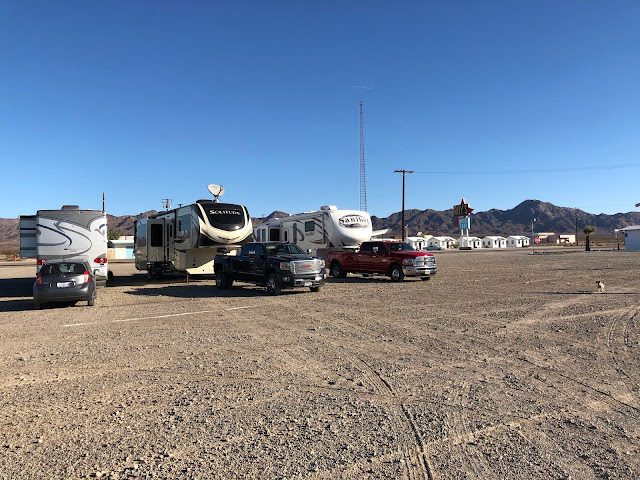 While here, we were able to see a gorgeous full moon rise. I took a couple of shots with my iPhone but I like the last one which Vince took. There were also a bunch of other travelers who also stopped to capture the sight. One couple took several hundred pics with a couple of cameras that probably cost more than my models! 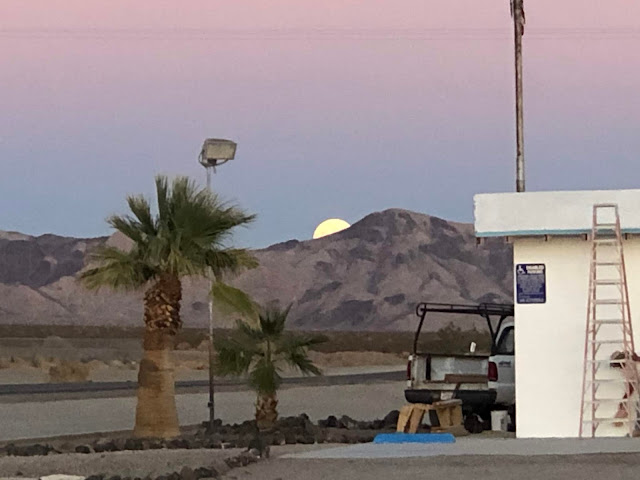 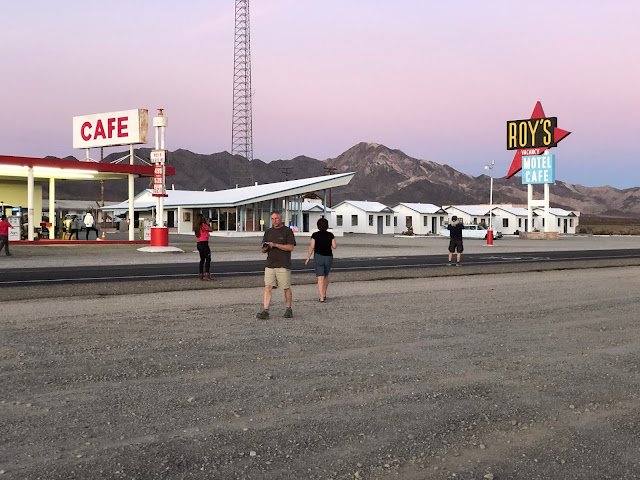 Tuesday morning we pulled out and finished our trip to Joshua Tree. We found a spot with lots of room for our 3 big rigs and got ourselves set up.
Our plan was to stay here for about a week and then head down to Borrego Springs where we were to meet up with a larger group for US Thanksgiving. This was the same place we spent Thanksgiving last year. Just the other day though, we received word that the property there had recently been sold and the new owners had kicked everyone out! As this was a popular boondocking area, this affected literally hundreds of campers!
Chris and Wendy, who is here with us, are the organizers of the Thanksgiving gathering so that meant some scrambling to try and find another location on quite short notice. After quite a bit of discussion, we are going to try and do it here at JT. The space will be a bit tight but we're all friends so hopefully we can make it work.
Pretty much since leaving Twin Falls several weeks ago, the weather has been what is known in the aviation industry as 'severe clear'. Basically no clouds! While this has made the days beautiful and nights clear and great for star gazing, it hasn't provided for much in the way of sunsets. Last night however that changed. It started to cloud over and by sunset, the colours started to appear. 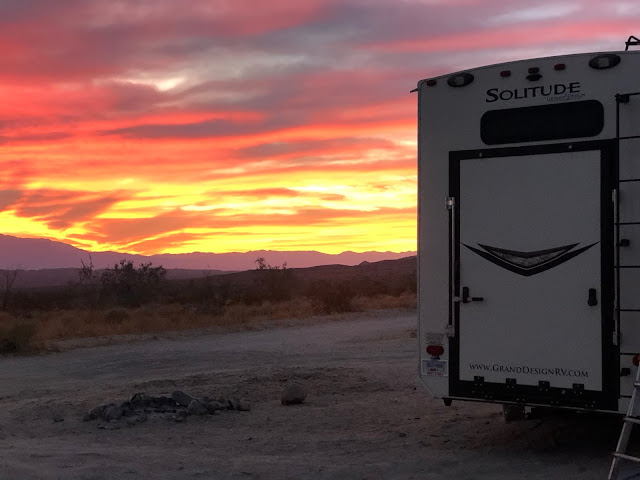 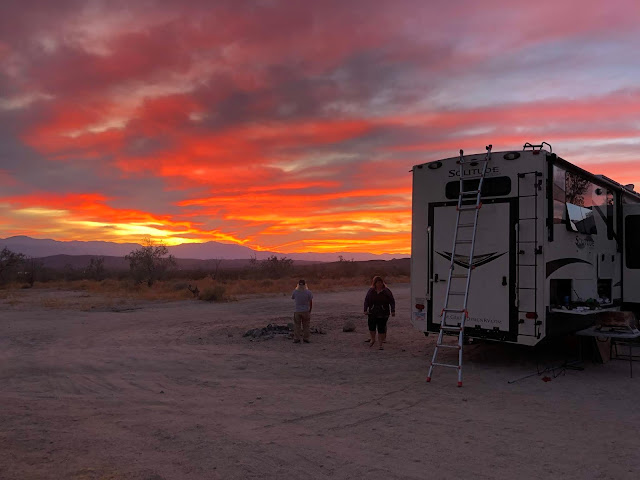 Later on, we received a couple of good rain showers and a couple of thunderstorms passed us by, fortunately quite a ways away. The forecast for the next few days is cooler and more clouds which should be a nice change from the hot, dry weather we have had for the last couple of weeks.

Just a quick reminder that you can click on the individual photos to view the full resolution version. Also any Bolded BLUE or PURPLE text is a hyperlink that will take you to a page with more information about that particular subject.
Posted by Rob and Chris's travels at 2:09 PM