Thanksgiving, Imperial Dam and a catchup

Well, it has been a while since my last entry although I haven't had a lot to relate.
We were just going into Thanksgiving down here and the weather had just started to change; and change it did! We went from clear, sunny days with temperatures in the high 20's and low 30's to cool, cloudy, windy and rain! We had been hoping for nice weather for Thanksgiving but alas it was not to be. Our group was 12 for turkey day and about 2PM it started to rain, so we all gathered in our rig as we had the most room. It was a bit crowded but we made do. 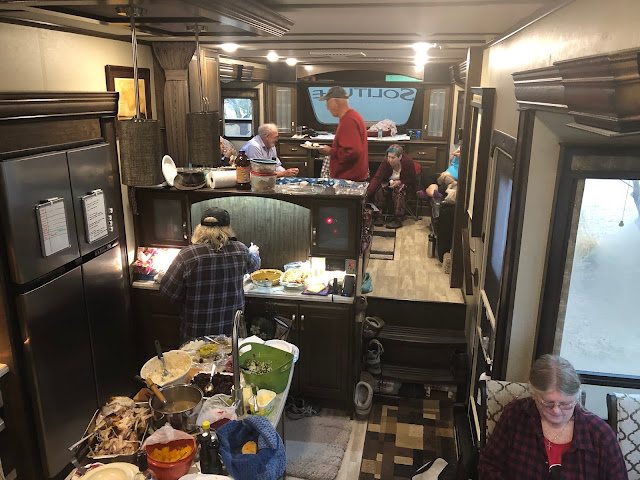 We had a good spread and this year several decided the theme would be deserts. We had pumpkin pie, pumpkin cheesecake, apple pie and pecan pie! 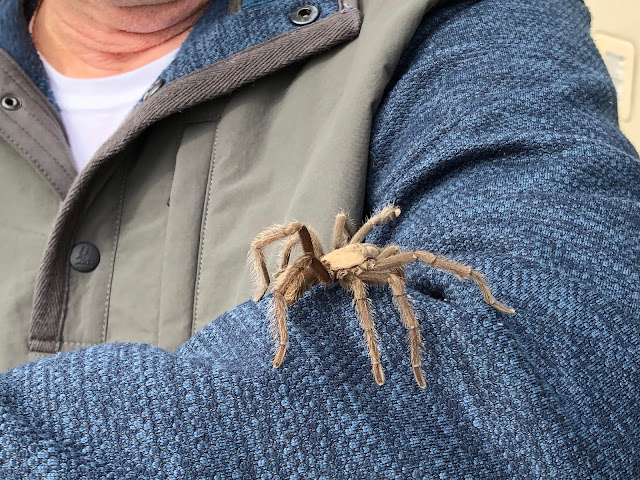 A bit before dinner, one of the guys found this little guy just hoofing it down the trail. He brought it to camp but several others ruled out asking it to stay. This is a desert tarantula. They are basically harmless unless provoked or threatened and even then their bite is only about the same as a bee sting.
On Friday Chris and I made a shopping trip into Indio to take in some Black Friday sales. Other than a few clothes, we didn't really buy much.
Saturday, we decided to pull up stakes and head over to Quartzsite for a couple of days. I had ordered a part for the trailer and had it shipped to a business there that acts as a mail and parcel drop for the visitors. They were closed until Monday so we parked in our usual spot at La Posa south. Chris went into town on Sunday and did some laundry and I pretty much just hung around camp.
Monday morning we packed up once again and headed into town to pick up the parcel then carried on south to the Imperial Dam LTVA. We have stayed here several times in the past and enjoy the location.
Friday, we headed into Yuma and met up with friends, Lyle and Barb Linney. We hadn't seen them since summer when we spent a bit of time back in Kamloops.
The weather had been slowly improving and had become quite pleasant again but yesterday, once again, the clouds rolled back in and by mid afternoon it had started to rain. It rained off and on through most of the afternoon and evening.
This morning, although cloudy, at least it hasn't rained. Tomorrow though is supposed to go back to sunny and warm; hope so.
We are staying here for a few more days, then moving over to Mittry Lake for the stretch through Christmas.

Oh, one other thing. A few entries back, I mentioned we had made a detour over to Okotoks, Alberta on our way south. The reason for that was for an interview for a possible job next year as camp hosts at the Okotoks Lions campground. We had heard about this place last year from a couple we spent some time with down here. They had been summer camp hosts there for several years but had decided to go on and do some other traveling. That left a potential vacancy at the park. They gave us the contact info for the park manager and we sent off an inquiry. She did get back to us but didn't have any openings for last season and honestly I had almost forgotten about it until I got a phone call late last summer. They had an opening for the 2020 season and wanted to know if we were still interested and if so, could we come by for an interview. We did that right after Canadian Thanksgiving and I guess we did OK as a few weeks ago we got word that we have the position! Their season is from May 1 through Sept 30 and we will have to be there around mid April. It should be interesting. Stay tuned.

Posted by Rob and Chris's travels at 7:08 PM