After leaving Flagstaff we retraced our steps back to Henderson where we fueled up and then carried on to Pahrump. We planned to spend a few days at the Pair-a-Dice Escapees Co-op park there and get a few trailer items knocked off our to-do list. We were also planning to meet up with Vince and Wendy who we spent the night with just prior to our Grand Canyon visit.
They wound up running into a minor problem with their rig and were delayed a bit which gave me a bit more time to do what I needed to do. Their problem was a pair of dead batteries which Vince asked for my help to swap out. Their batteries are double the size and weight of ours and mounted in a tray that makes working on them somewhat difficult. That project took us most of a morning and as a result we didn’t get away en route to Death Valley until after lunch.
The drive to Death Valley took a little over an hour and we got settled into the Sunset RV park at Furnace Creek in the early afternoon. The national park service had a pair of astrophotography seminars scheduled for the afternoon and I was able to get the trailer set up in time to make it over for the first one at 3PM. After supper and after dark, was the second session which was at a spot just out of town. Myself and another Boomer here headed over there where I found that my old SLR camera was a little too old to get decent photos of the nighttime sky. I did get a couple of so-so shots but not nearly as good as I was hoping. The night skies here are incredible and Death Valley is one of the few true Dark Skies areas in the country. 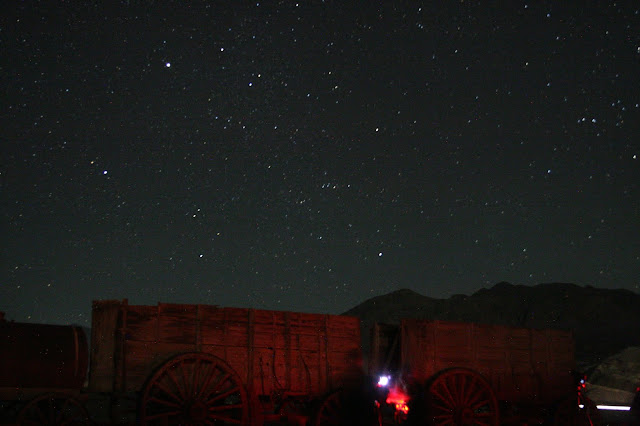 One of the draws of Death Valley is its history. One aspect of this is the mining of borax in the late 19th century. You have no doubt heard of the 20 Mule Teams that were used to transport the refined Borax ore to the nearest rail line over 120 miles away in Mojave, CA.
A couple of days later, Chris and I went back during the day to the Harmony Borax Works which was active in the 1880’s.
Here are a couple of shots of the wagons you can see in the nighttime photo above. 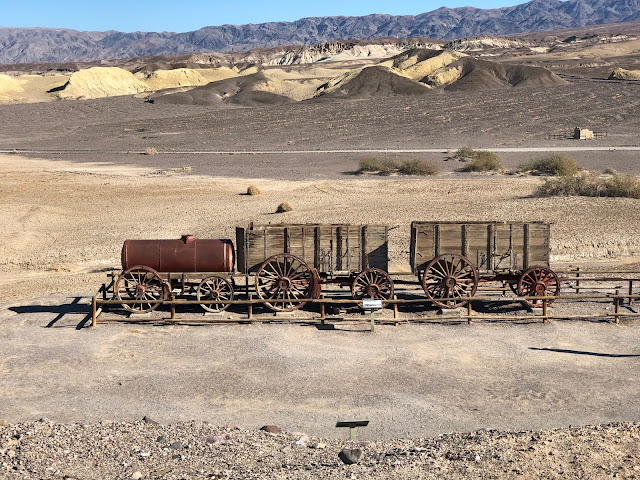 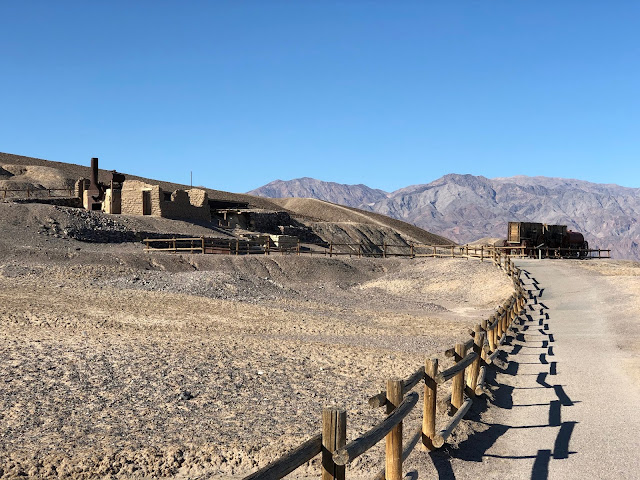 They have a couple of brand new reconstructed wagons that I understand they will be using in a parade in a couple of days. At the start of a busy day yesterday, we went up to check them out. 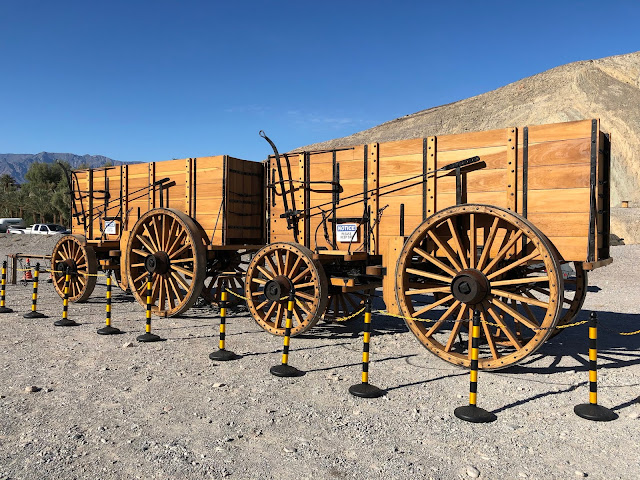 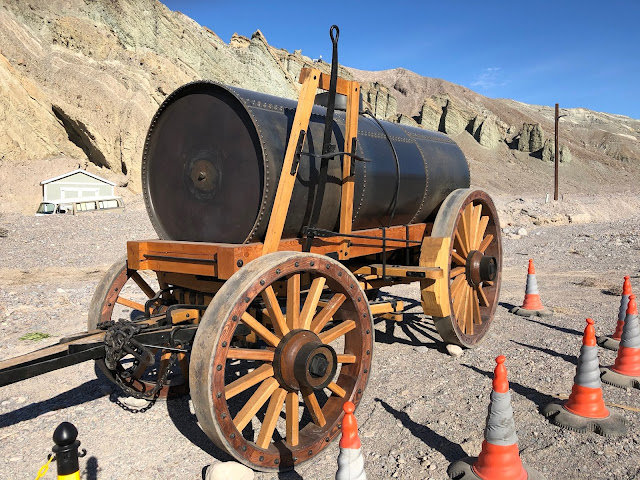 After having a look at the wagons, Chris and I took a drive about 17 miles south to a place called Badwater Basin. There is a spring there fed from runoff water from the mountains to the East. The reason it is called Badwater, is that all the salt minerals in the dry lake bed turns the water very salty. 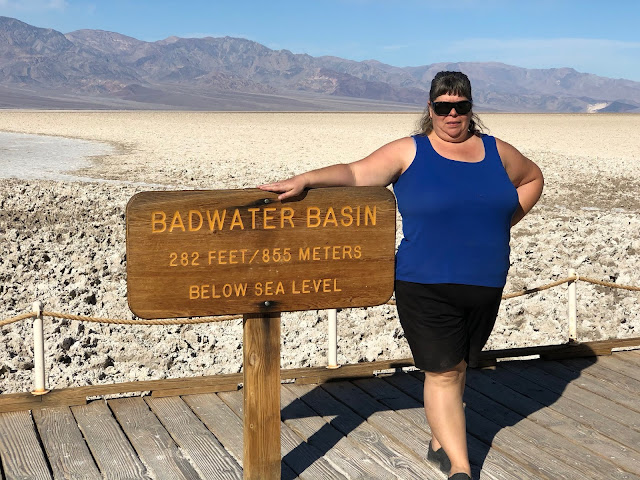 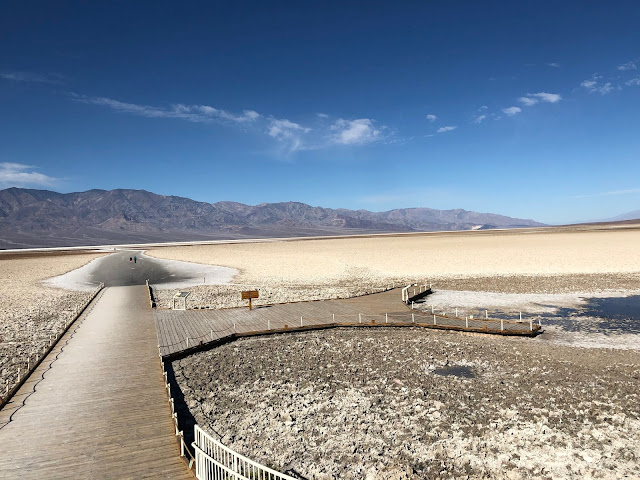 As most of the valley bottom is here, this area is about 282 feet below sea level. They have mounted a sign up on the cliff face to indicate where sea level is. 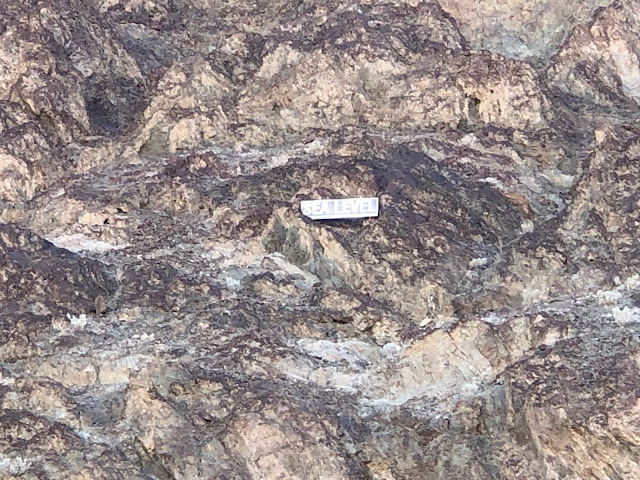 After Badwater, on the way back to camp, we took a side road up to a place called the Artists Palette. The rocks here are so colourful with the various minerals exposed in the formations. My photos don't do it justice. 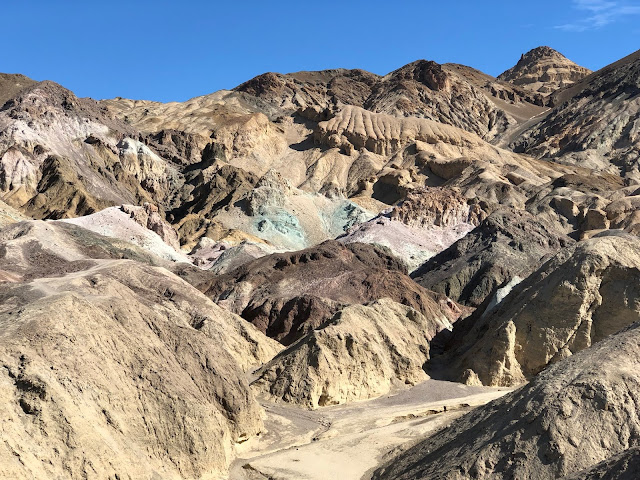 For the last 30 some odd years, a group of people have been reenacting part of Death Valleys history in the form of a wagon train. They start about 100 miles south of Furnace Creek and make their way north, planning their arrival during the annual Death Valley 49ers Encampment. The last couple of years they have been inviting a select group of people, Escapees among them, to join them at a spring about 20 miles out. They have the wagons circled and the animals tethered and each wagon crew prepares some sort of dish that would be typical of life on the trail. The rest of us bring a pot luck item and our appetites. Some of the choices were roast Bison, Elk lasagna, Sourdough bread and of course beans! After a delicious meal, they light a central bonfire and a small group of musicians entertains everyone with cowboy and western style music. All in all we had a wonderful time. 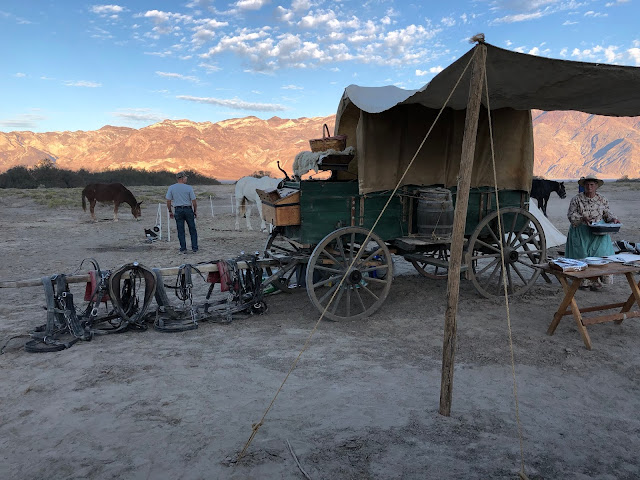 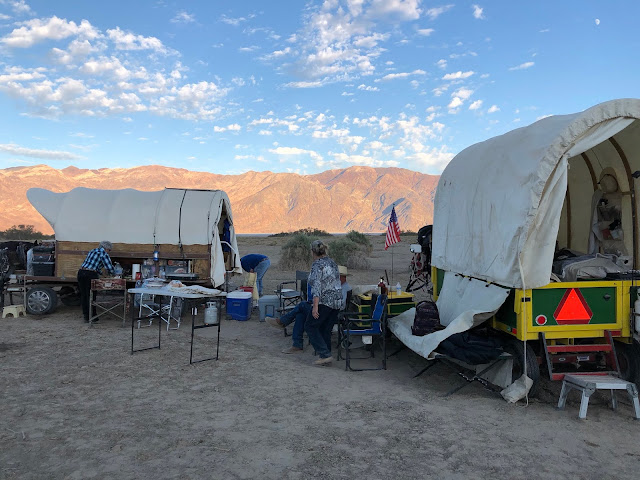 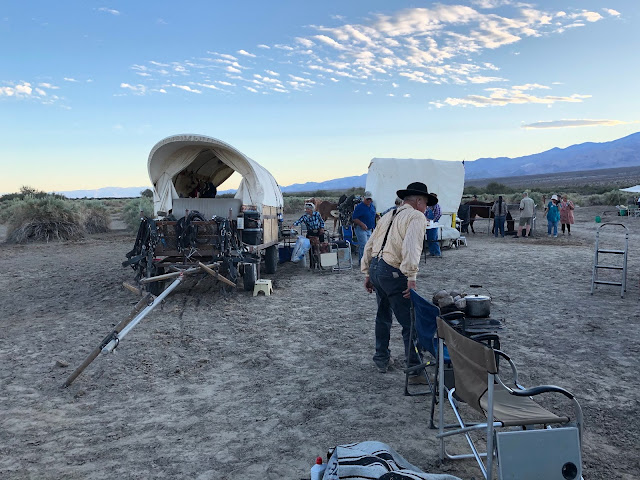 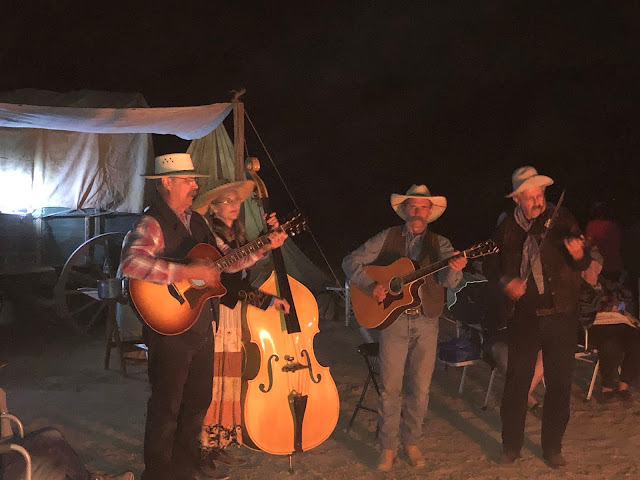 This morning I struck out on my own to do a hike that looked interesting. Just south of Furnace Creek is a canyon named Gold Canyon. There are several trails but the one I wanted to do was to a place called Red Cathedral. It is about 1.5 miles in and a constant climb of about 500 feet vertical. It took me about 90 minutes round trip and was a good workout. 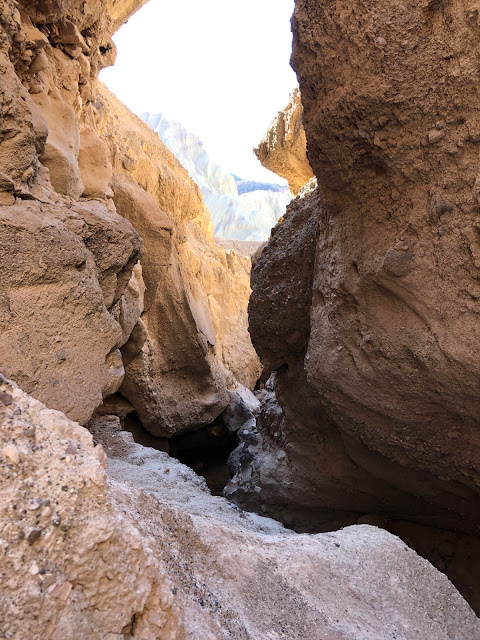 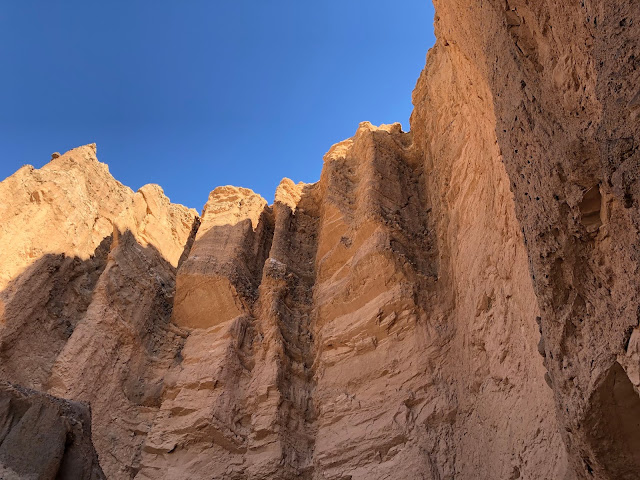 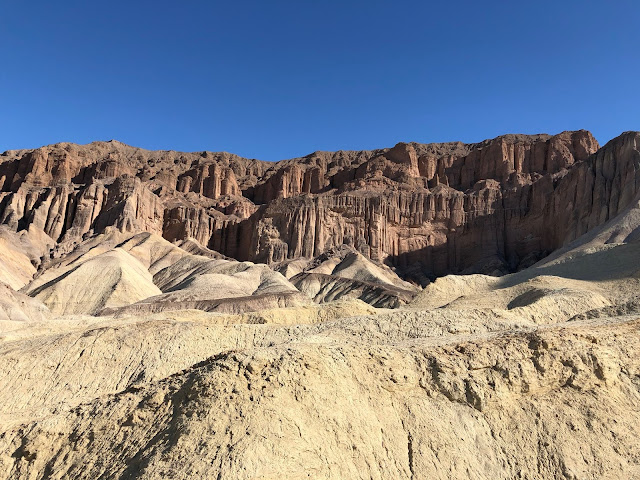 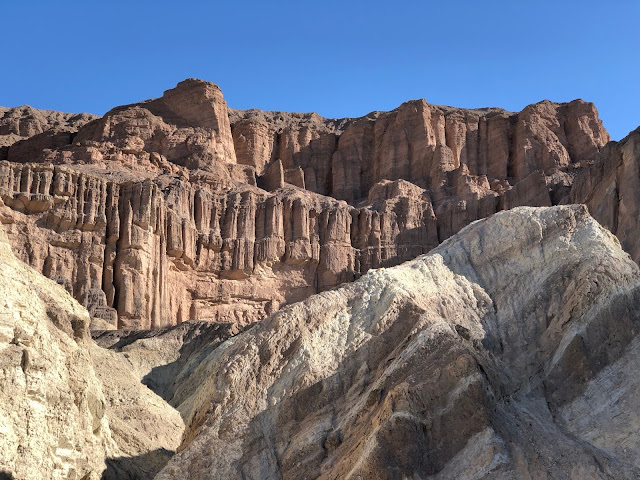 We plan to be here a few more days and then head further south to a spot we found on our first winter down here; the south entrance of Joshua Tree National Park. 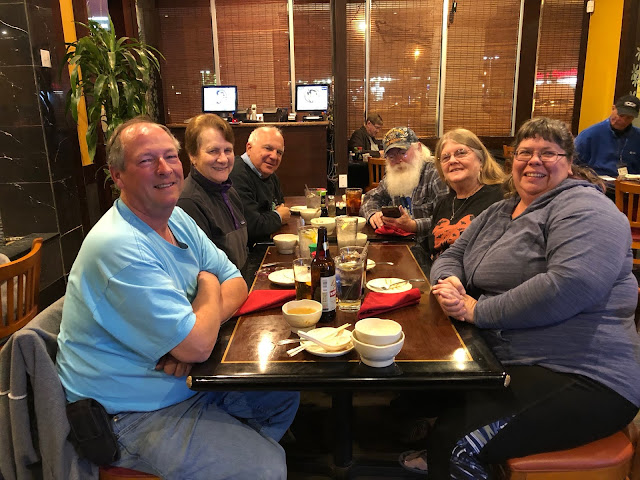 A few of us out for Chris's birthday dinner in Pahrump. That is Vince and Wendy behind Chris. 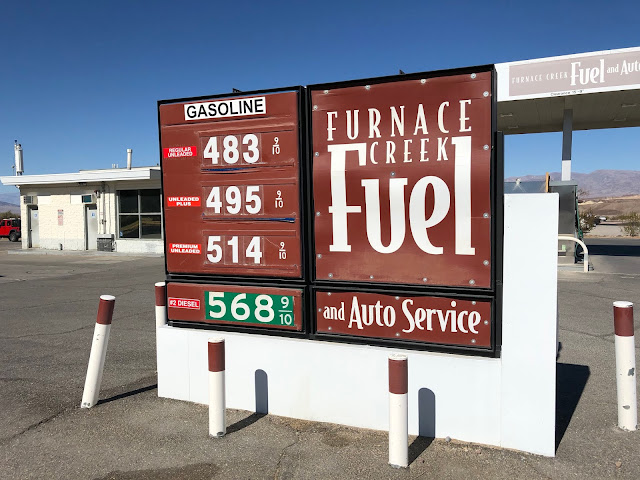 The fuel price in Furnace Creek. Believe it or not that Diesel price equates to about CDN $1.94 per Litre! And I thought Canadian fuel prices were bad! 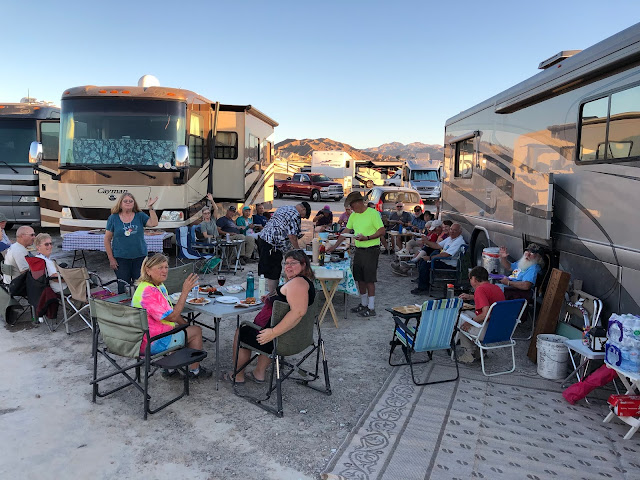 The Boomer gang here in DV at Happy Hour.
Posted by Rob and Chris's travels at 9:11 PM