As I mentioned in my last entry, Maya landed wrong after jumping off an easy chair at Paul and Joans on Tuesday. I don't think she had a very comfortable night as she woke us up a couple of times whimpering. There wasn't much we could do as she was laying under the bed and wouldn't come out. In the morning though, she seemed to be doing a bit better, in that she would move about although still wasn't putting any weight on her sore leg.
Yesterday we had made plans to meet up with Paul and Joan at the AMPS Model field. Paul and I would spend the afternoon flying while Joan and Chris went for pedicures. I had a great day flying. Managed 3 good flights with the jet while Paul did 4 or 5 with his smaller models. 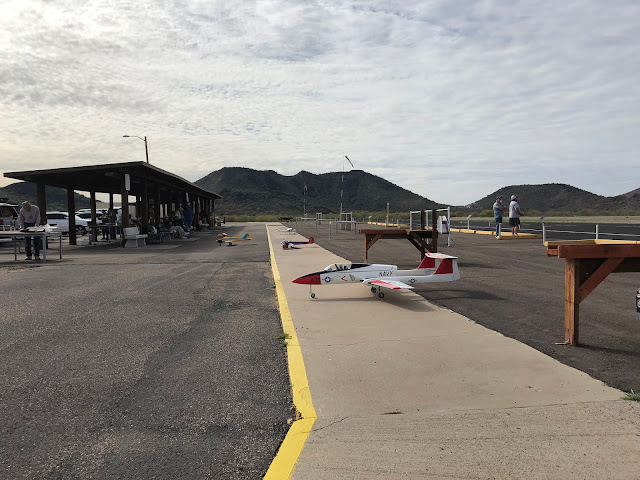 I guess they don't get many guys flying jets at this club as mine generated quite few appreciative comments. It is a bit of a tight place to fly as they are about 4 Kms right off the end of a runway of a very busy full scale airport. They have a rigidly enforced maximum height limit of only 400' and I found it a bit of a challenge to stay under that.
After flying, we dropped my stuff off at the trailer and then met Paul and Joan at a Japanese restaurant for dinner.  All in all, a really nice day.
Maya had a better night last night, curling up on the bed and sleeping soundly all night. She was still not putting any weight on her leg this morning though so we decided we would take her to see a vet. I think it was a good thing we did, as it looks like she has torn her cruciate ligament.  These are a pair of ligaments behind the kneecap that hold the bones of the upper and lower leg together. Fortunately the vet doesn't think she will need surgery but will have to take it very easy for 4 to 6 weeks. That isn't going to be easy to get her to do! They did give her some anti inflamatories to help with the pain and reduce any swelling.
Otherwise, today was laundry day again and we managed to get that chore out of the way for another couple of weeks.
We have had a few more clouds around the last few days which has been making for some fantastic sunsets.  This is the one just as we were heading for dinner last night. Posted by Rob and Chris's travels at 6:03 PM