Countdown: Last day before the official start of Boomerville

Today is the last day before the official start of Boomerville 2019 and rigs were pulling in all day.
The day started with a trash run to the local transfer station. I volunteered for this as I needed to head in that direction to make a water run anyway.
After dropping off the trash, I continued in to the RV Pit Stop and filled up our new 60 gallon water bladder. Normally water around here is very salty so most people use Reverse Osmosis treated water for their drinking water.  The going rate around here for that is $0.25 per gallon or $1.00 for 5 gallons. The Pit Stop has a deep well and their water actually tastes pretty good. It is cheap as well at only $3.00 to fill our 60 gallon bladder. Besides water, they also sell propane at a fair price and have a good sized RV Sani dump as well.
While filling up I could hear some activity over at the Quartzsite model flyers field so stopped in for a short visit there on my way back to camp. There were quite a few guys out and I hung around for a bit before carrying on.
At 11 there was a pre-planned trip into town for any of the ladies that wanted to go for brunch and shopping. The 'Boomer Babes Brunch'. Apparently some of the guys feel there are too many ladies only events so someone decided to 'crash' the party! 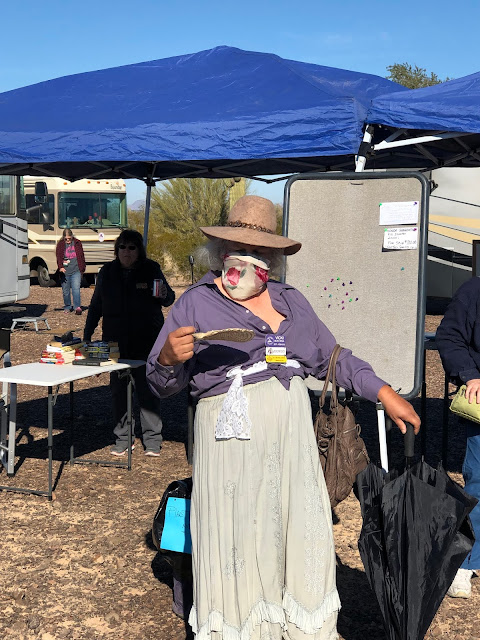 There was a 'Boomer Bad Boys Breakfast' run yesterday, so I guess the gals are entitled to an outing of their own once in a while.

I remember checking the sign in sheet around mid day and noting there were around 65 registered rigs so far. Probably another half dozen rigs rolled in through the afternoon and there were even one or two who arrived after dark tonight.
The nightly happy hour gang has grown a lot just since last night. This is something that happens every afternoon starting at 4 and goes until it gets too chilly. We have a large fire ring but haven't used it yet. I suspect once we are officially underway tomorrow, they will be lighting fire. 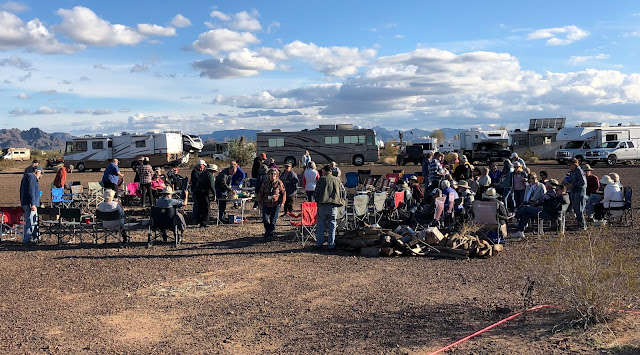 As you can see in the photo above, it was another nice day today. The forecast for tomorrow is now starting out sunny then increasing clouds through the afternoon and showers overnight and into Tuesday. Better than snow any day!
Posted by Rob and Chris's travels at 6:51 PM