When I left off the last entry, we had made it to Osoyoos on Nov 7 and had parked for the night in a church parking lot about 3Kms from the border. The plan was to get a decent nights sleep and then head for the crossing around 6:30.
As it turned out, we were both awake a bit before 5. We were also seeing a fair number of rigs driving past us headed for the border so we got ourselves organized and headed off ourselves.
We ran into the lineup about 1 Km from the border but it seemed to be moving along fairly well. 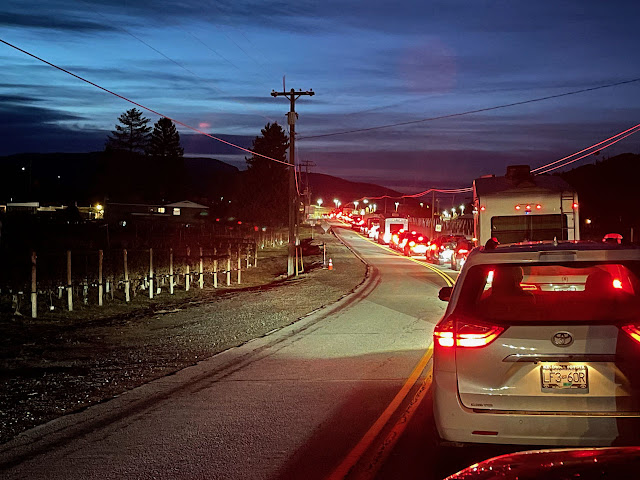 We hit the line about 10 to 6 and it wound up taking about 45 minutes to get to the plaza. We were met by one of the border agents who was directing traffic a bit to help organize the flow to the booths. She asked us about our vax status to confirm we were vaccinated but didn't ask to see any documentation. A few minutes later we made it to the booth and the agent there who looked at our Nexus cards. We chatted for a half minute or so and were sent on our way. No questions about where we were going, what we were carrying, or any of the usual things. Probably the easiest crossing we have ever made!
Our first stop was Walmart in Omak to pick up a few groceries as our pantry was pretty bare and for a quick bite.
An hour or so later we passed another rig heading south and Chris said it looked like a couple we used to live close to in Kamloops. Sure enough it was! We arranged a fuel and food stop in Othello and stopped for a bite and some catch up. They were heading to LaGrande to get some work done on their trailer en-route to El Centro, CA.
We wound up stopping at the Wild Horse Casino in Pendleton, OR for the night. And what a night it was! It blew and blew all night. The trailer was rocking so bad at one point that while working on my laptop at the kitchen table I actually felt slightly nauseous. I had to raise my head to regain my equilibrium. We were up early the next morning again and found out that I-84 East of Pendlelton had been closed overnight due to the wind.  Fortunately we noticed the truckers starting to head out around 7 so about 8 we did the same.
The rest of the day was pretty uneventful until about an hour out of Twin Falls, our nemesis, the check engine light lit up again! We continued on to our stop for the next couple of nights at the Twin Falls Fair grounds. After parking the trailer we set out to visit our friends Eric and Susanne.
First order of business the next day was to the local GMC dealer to see what was up. Same basic codes as before, injector related. This time the advisor suggested we ensure we were running with the 4 wheel drive mode locked in 2 wheel drive instead of Auto. Honestly I can't remember what we had been using. Anyway, he cleared the codes and reset the system and sent us on our way. We also did a bit more extensive grocery shopping now that we had access to some larger stores.
The rest of the day and evening we spent with Eric and Susanne again.
Thursday morning we were off again. Up until this point we had been hoping to be able to visit with some other friends, Steve and Tammie in Colorado but with the truck issues and possible weather issues, we reluctantly decided to forego that and head straight south. We took the route through Ely NV and then over to NV-318. Our last time through Ely was a bit of a white knuckle drive as it was in the middle of a heavy snow storm on our way back 2 1/2 years ago. This time thankfully it was the polar opposite. Beautiful weather the whole way.
Shortly after turning onto NV-318 we saw a couple of highway patrol coming right at us weaving back and forth across all lanes with all their lights on. Turns out they were clearing the way for this big boy. 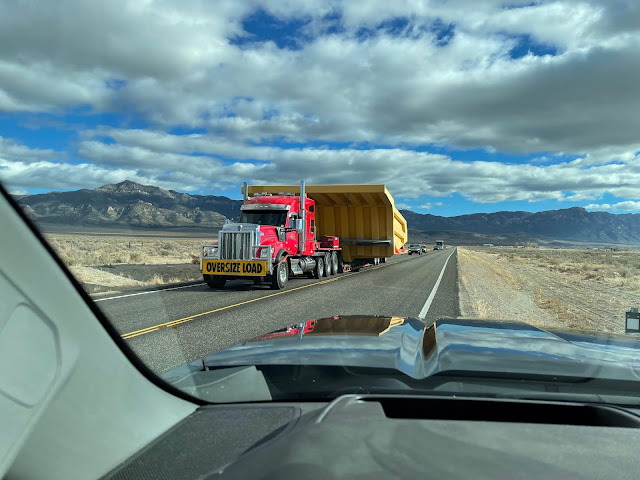 I think that sign is a bit of an understatement! Fortunately I was able to pull over onto a wide spot on the shoulder in time and get stopped. He had the 2 Highway patrol and a pilot car out front along with another pilot car and anther highway patrol bringing up the rear.
The rest of the drive to Alamo which was our next planned stop was pretty boring. We found a spot on BLM land across from Pahranagat NWR where we parked for the night.
Friday, we were on the road by about 8:30 and headed toward Las Vegas. We had noticed that the truck was starting to sound similar to what it does when the check engine comes on and sure enough, after an hour or so, it was back on. Not much we could do about it so we carried on.
We blew through Vegas and made a fuel stop at the Railroad Pass Casino in Henderson, then on towards Needles. From there we cut over and picked up I-10 just east of our destination arriving at the Joshua Tree BLM site about 2:30. We found a decent site and were set up in short order.
Most of the way down we have been using our TSD Logistics fuel card to enable us to fuel at truck stops. We also get a not insignificant discount over regular pump prices. So far this trip it has probably saved us between $80 and $100 over posted diesel prices. We first started using this company just before heading back in 2019 and have been eager to keep using it on this trip. Their card does work at some truck stops in Canada but without any discounts to speak of.
I find truck stops are also much easier to get into and out of than most regular gas stations. We have also noticed that all fuel prices so far are quite a bit higher than our last time down here. I am not looking forward to our next fuel up in California though. They have the highest fuel prices in the lower 48; pretty much on par with and some places higher than what we pay back in BC. Today's price for example is averaging 4.81 / US gallon which translates to around $1.60 / litre.
Our next order of business is to visit another GMC dealer in the valley and see if they can figure out what is going on. Otherwise, we will just hang out here for the next couple weeks until after US Thanksgiving. 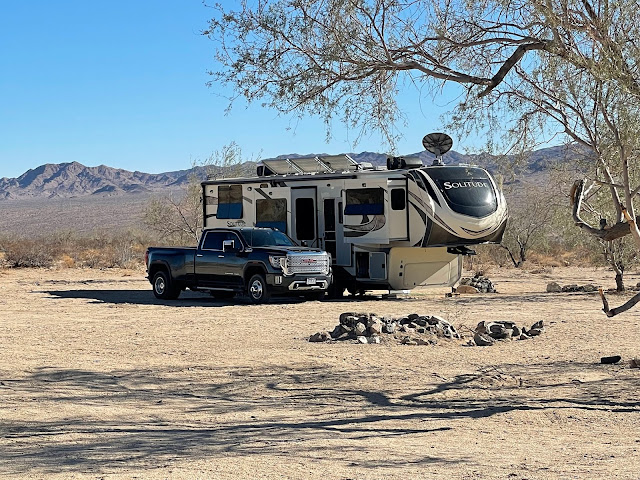 Posted by Rob and Chris's travels at 7:49 AM