I seem to be running out of catchy titles but things are pretty consistent for us at the moment so it kinda fits.  Not boring or anything but a lot of same old, same old, but there have been some interesting moments.

We have had some pretty extreme weather in the area recently. A couple of weeks ago, we had a very strong thunderstorm roll through the Calgary area. We fortunately missed most of it here in Okotoks, only getting some heavy rain and light hail. Northeast Calgary though, which is only about 30 miles north of us, got hammered with heavy hail. Some of the hailstones were baseball sized or larger. Here are a couple of pictures lifted off the web. 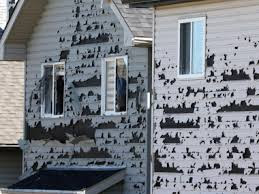 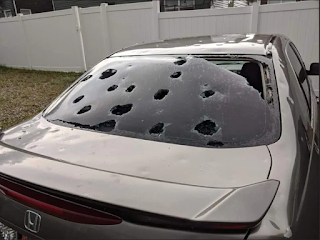 Some estimates place the total damage in the area at around a Billion (with a B) dollars!
In fact we have had thunderstorms to some degree about once a week for the last month or so.
Last week several funnel clouds were even spotted south of us during another storm.

June is also the season for Cottonwood seeds. It started about 3 weeks ago with a few little bits of fluff floating around, but within a few days it turned into a full blown fluff storm. If it wasn't for the seasonable weather one might almost think it was a blizzard. 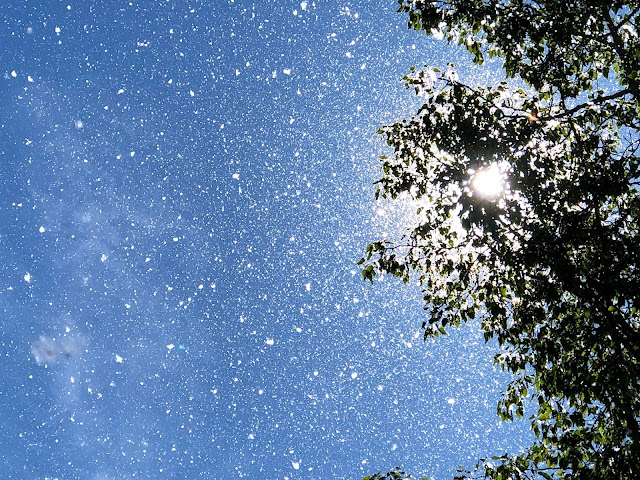 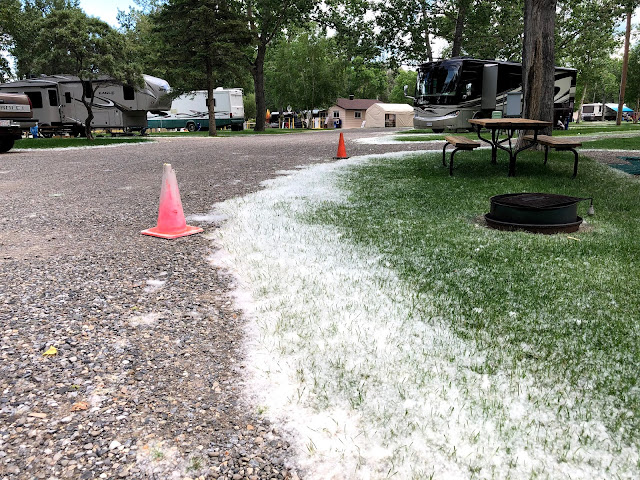 This lasted almost 2 weeks during which time the stuff was everywhere!  The campground is surrounded by Cottonwoods and a variety of Poplar that also creates fluff seeds so it didn't matter which way the wind was blowing, we got it!  We had to make sure doors were kept closed or it just invaded any open space. Eventually though the seed pods were spent and then they just littered the ground. 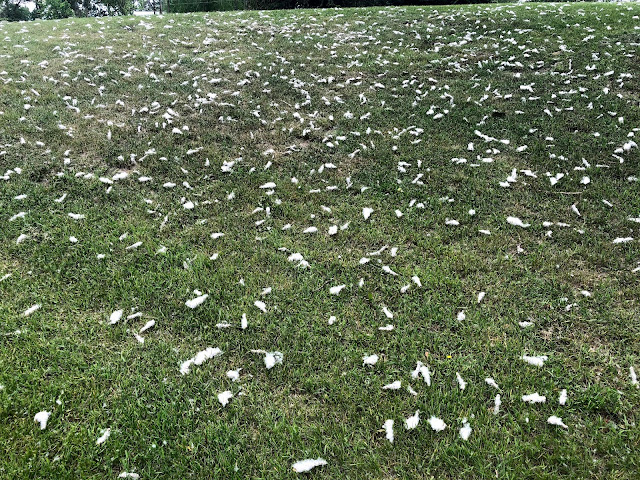 I have mentioned previously that we have a small herd of urban deer around here. It is amazing how unafraid of people they are. Chris and I came upon this one while out walking Maya the other day. We were within 5 feet of it and it just stood there and watched us. 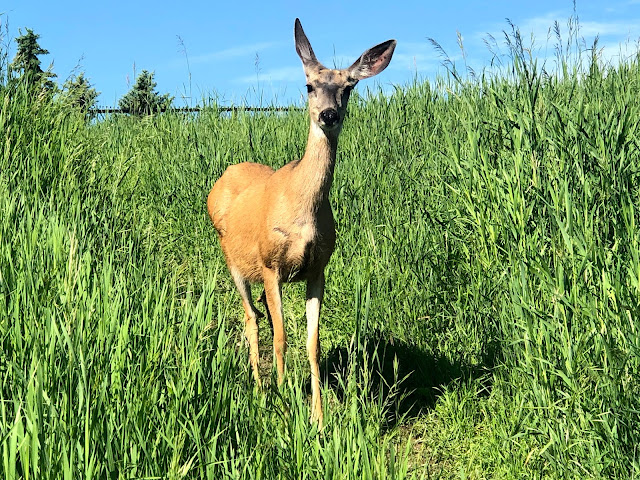 It wasn't until we walked around behind it that it decided to be somewhere else and wandered off.
We also saw these two on the tree just outside the office.  Looks to be a parent woodpecker teaching its little one how to drill holes and look for bugs. 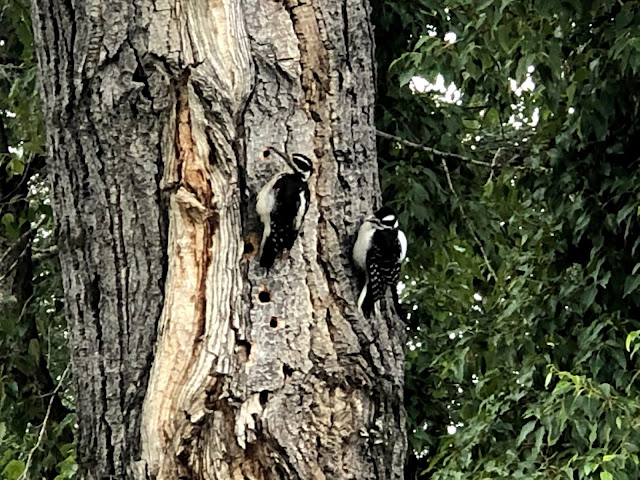 Last week we took a drive out to the object the town of Okotoks is named for. "Okotok" in the local native tongue means "rock". Just outside of town is a big glacial erratic dropped during the last ice age.

All around the area are families of these little guys. While I don't know for sure, I believe these are a variety of prairie dog, a type of ground squirrel. 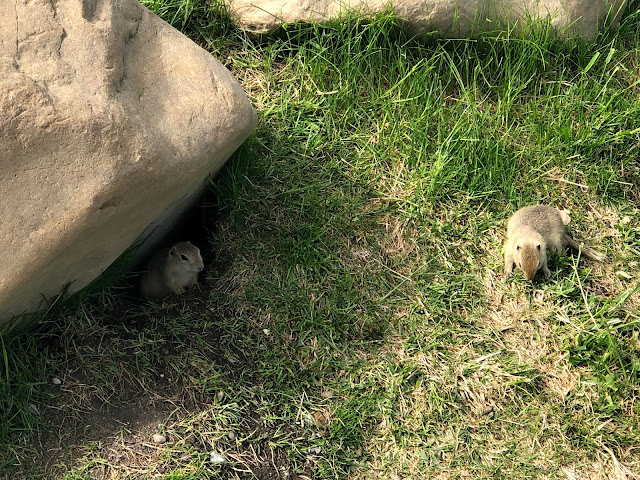 Analysis has proven that the rock originated up near Jasper, BC, about 400 kilometers away. There is a trail of erratics stretching between here and the Rockies near Jasper. This is the largest in that trail. 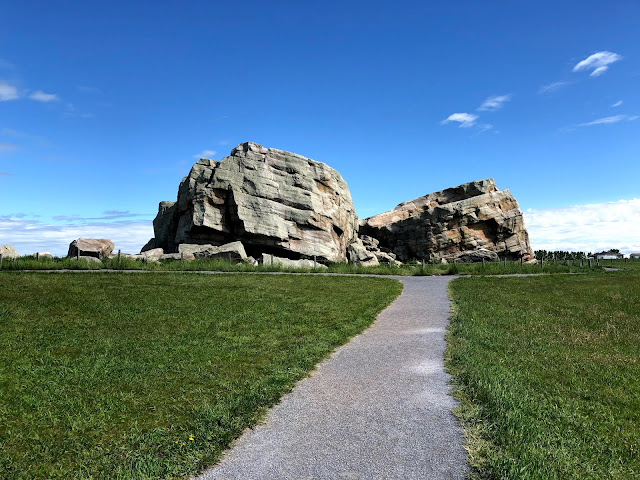 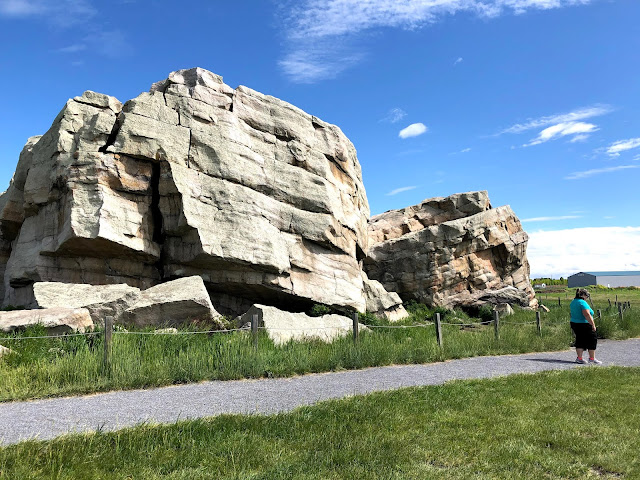 A couple of weeks ago we took the trailer into the local Grand Design dealer (Woody's) to get the last of our warranty items looked at. They needed it for a couple of days but as this is our home we had to have it back at the end of each day. During the first day they had it, we did a bit of running around in Calgary that we wanted to do. IKEA being one stop. While there we found a few items for the trailer. One other stop was the local GMC/Chev dealer just across the street from Woody's. They had several of the new 2020 1 Ton dually's on the lot. One was almost the same colour as ours. Anyway after talking to the sales guy for a bit, we took it for a test drive and after kicking it around for a bit, decided to trade the old one in. This one was one that was special ordered for another customer but apparently at the last minute the financing fell through. His loss, our gain! The old truck needed new tires anyway! 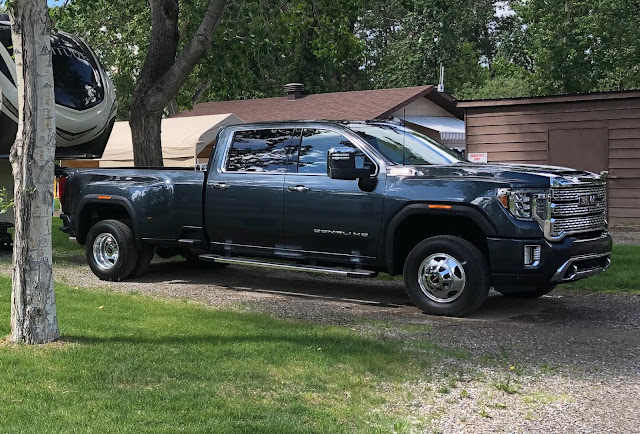 We managed to work a deal where all we did was extend our existing payment for an additional 3 years. The same amount of time we'd had the old truck.
The new truck has a bunch of new features that will make towing nicer including more horsepower and torque. Our old truck had a max towing capacity of around 22,600 lbs which was sufficient for our trailer (20,000 lbs) and worked well enough but having a larger safety margin is desirable. The new 2020's have upped the towing capacity to just under 32,000 lbs and also increased the payload. Add in a bunch of new features specifically geared for towing and it should make for a more comfortable experience.
There was some confusion the next day when we went to close the deal though. Someone had recorded all the important info like stock number and Vehicle ID # incorrectly. It took them a couple of hours to get it all straightened out so it aligned with the truck we had decided on.
The last thing we did was transfer our stuff from the old truck to the new one. The big item being the hitch for the trailer. Both trucks use GM's built in 'puck' mounting system, and neither I nor any of the GM sales staff had known that GM apparently changed the spec for the 2020 model year. The hitch wouldn't fit! Not even close! Now this was a problem; we had a new truck without a functional hitch and a trailer over at Woody's that we needed to get back to Okotoks. Fortunately the dealership was nice enough to loan us a set of dealer plates so we could use the old truck to haul the trailer back to the campground. The next day, Saturday, we drove back to Calgary and picked up the new truck. Luckily I was able to order a new set of legs for our hitch at a reasonable price so we are once again good to go. The rest of the day we spent driving to Sparwood, BC so we could properly register the truck. As we are BC residents we couldn't register the thing in Alberta. We needed a break in run anyway. Sparwood being the closest BC insurance broker open on Saturday.

The last thing for this installment is something I have wanted to do with the trailer for a while and with all the electrical storms we have had recently, convinced me that now was the time.
This is the installation of an Electrical Management System or surge protector. This one has a number of other features as well that should protect us against badly wired campground electrical pedastals. More common that you might think! The photo below shows the new EMS installed beside the existing transfer switch. 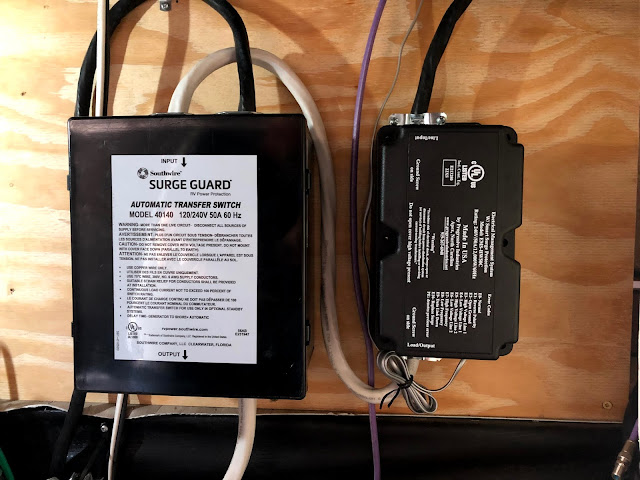 I mounted the remote display on the compartment door beside the Electronic Levelling control panel. In this photo it is showing we have a solid 60Hz power feed. Right where it should be. 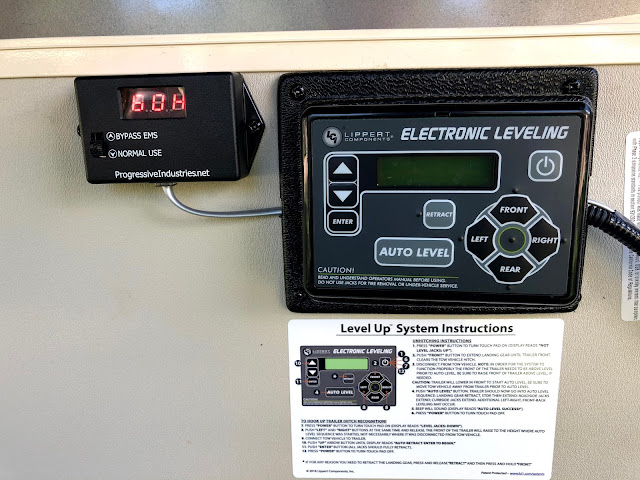 All in all, the whole install only took about an hour and a half and now we should be safe from almost all shore based electrical problems.
Posted by Rob and Chris's travels at 8:23 PM