The Quartzsite RV show and Boomerville 2020

This year is our third year in Quartzsite for the January zoo or, more properly, the Quartzsite Sports, Vacation and RV show. It is a totally crazy time where the the population of this sleepy desert town swells from approx. 3500 year round residents to over half a million! Almost all of them boondocking out in the desert in a dozen or so main areas around town. The main draw in January is the 'big tent' where a hundred plus vendors show and try and sell their products and services.
In past years, most of these vendors were selling primarily RV related products. The last few years though, things have changed and the tent now seems more like a large home show. Yes, there are still lots of RV related products and vendors, but more and more non RV related stuff is showing up. Things like hot tubs and cell phone accessories, leather belts and wallets to name a few. Also the hucksters selling the latest 'must have' miracle kitchen gadgets!
There is also another area across the road called Tyson Wells with longer term vendors who usually stick around for a good chunk of the winter. Here again you can find almost anything you like from RV accessories to hats to Trump wear to yard art.
Quartzsite also hosts a couple of large RV dealers during this time and they display and sell a large assortment of RV's. This makes for a great place to explore different floor plans and 'kick the tires' so to speak.
All of this, plus Quartzsite is also known far and wide among the rock and gem hounds. There are quite a few vendors who sell every kind of gem or mineral you could want.

After my last update, Boomerville filled up quite quickly. The total this year hit 239 rigs! It was actually quite crowded toward the end.

On Saturday the 18th, a bunch of us saddled up and headed off to a spot north of Parker which, while only about 5 miles off the highway but feels more like 20, called the Nellie E. Saloon or just the Desert Bar. This is a spot where someone converted an old mine camp into a completely off the grid bar and restaurant. 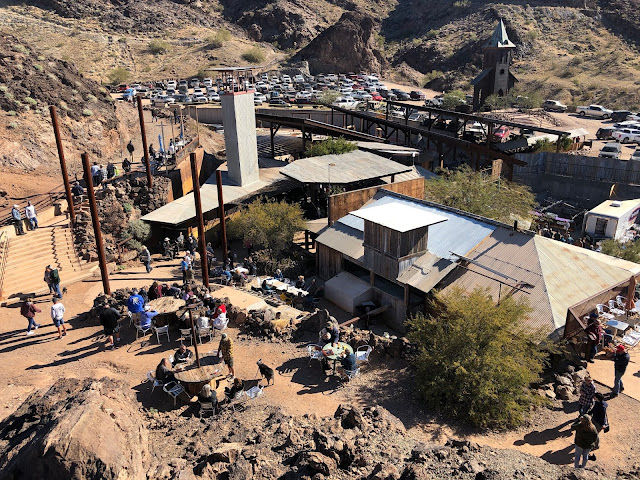 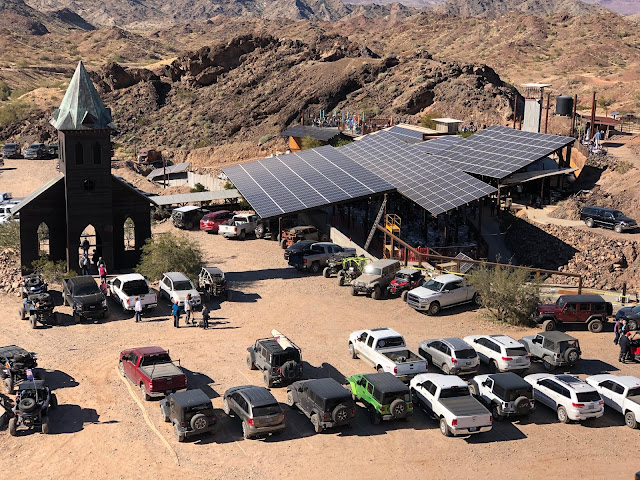 The road out was pretty rough in Steve and Tammie's jeep but once we got there it turned out to be a pretty interesting place. They have a very impressive solar array to keep it all powered. As far as the restaurant goes, the best way to describe it was fairly average but over priced. I get the price bit though as I don't imagine it would be cheap to transport all their supplies out there and that solar plant is pretty extensive.
The drive back was the best part though. Instead of taking the road back, we decided to take a back trail more suited for jeeps, ATV's and off road vehicles.  There were a few challenging sections but Steve did a masterful job. We also got to see some new terrain as well. 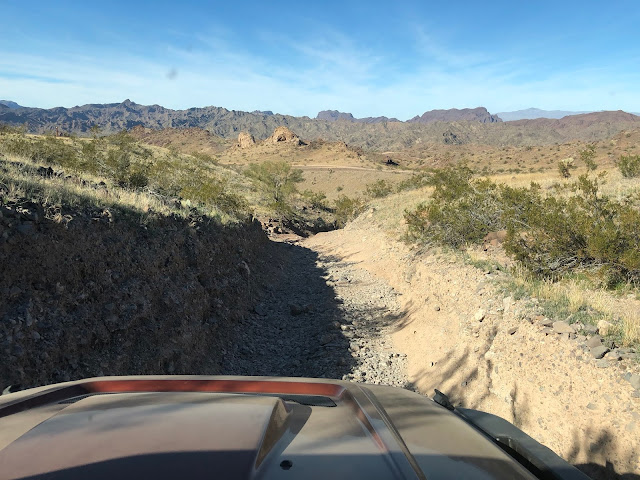 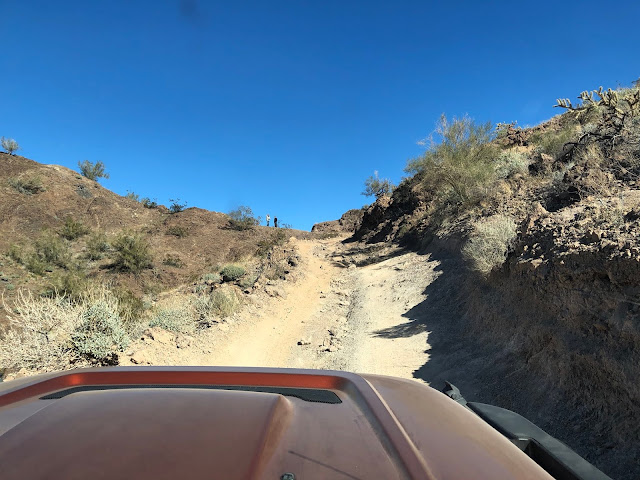 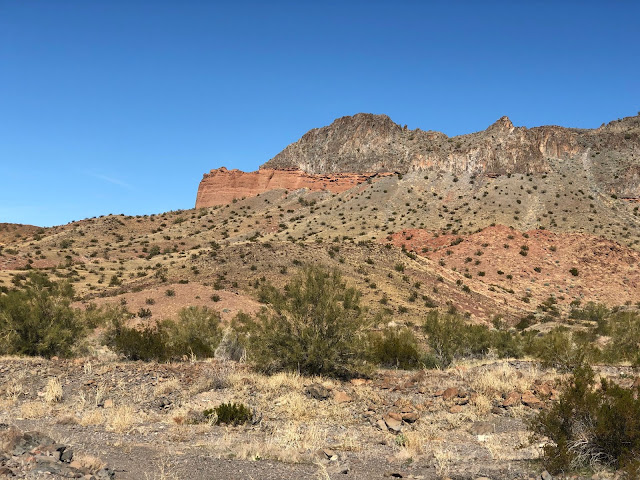 One thing Steve picked up from one of the vendors at the big tent was a new set of batteries for their coach. Their old ones were getting pretty tired and as they full time, they needed a new set that would provide for all their needs. This was our project for one of the days. It wound up taking part of one day and most of the next as they were a tight fit and we had to get a set of cables custom made. We also installed a new inverter and battery monitor for their coach. 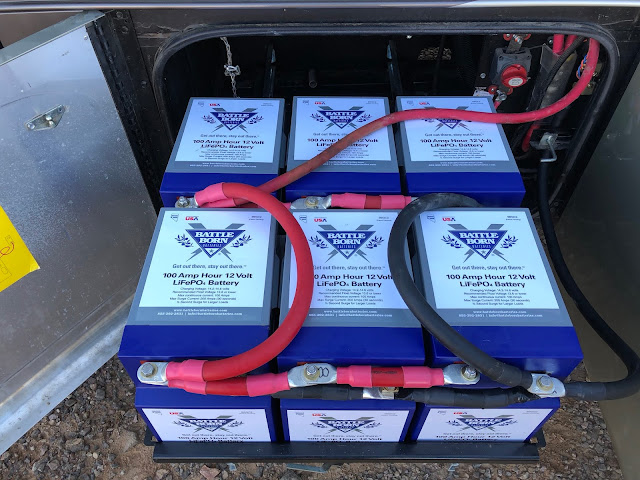 Before installing the inverter though, was the Boomerville pot luck. As last year, there was a ton of food and we all ate way too much! 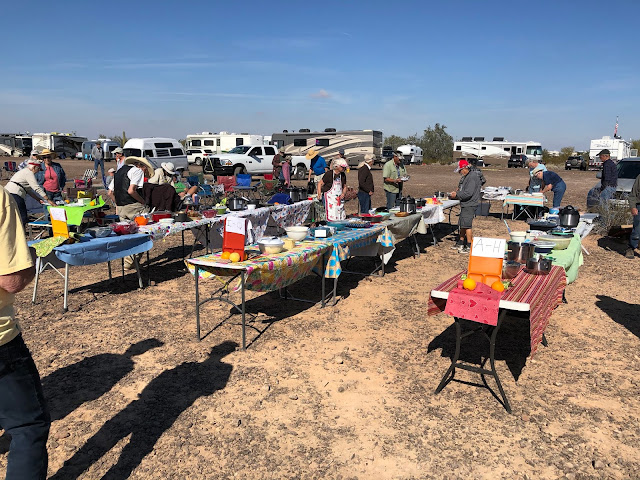 It was after we stuffed ourselves that Steve and I decided to finish up their install by mounting their new inverter. I should add that this thing weighs about 60 pounds and is mounted to the ceiling in one of their cargo bays. That was a lot of fun but we did manage. Their refrigerator and other appliances are much happier now with clean pure sine wave power.

Thursday was the annual CARE auction. I wrote about this last year but Chris and I, along with Steve and Tammie got a bit more involved this year. Somehow we got nominated to be on the teams that canvased the vendors in the big tent for donations to the auction. I think we did pretty good collecting quite a bit of merchandise.
The auction this year started around 11:30 and went til after 3. Chris, again this year, put some of her famous cinnamon buns and some pineapple upside down cakes in. I didn't keep track but I believe they garnered over $400 this year.  All in all, with the proceeds of the auction and other fund raising efforts over the last couple of weeks, the Boomers brought in about $18,000 dollars for CARE!

Last Sunday a bunch of us headed out to the Kofa National Wildlife Refuge to do some crystal hunting. There is a small area where they allow people to hunt for crystals; mostly quartz. After 3 hours or so we all had had some success in that we found some small ones. This area is pretty well picked over so not too much left to be found. We all had a good time though. 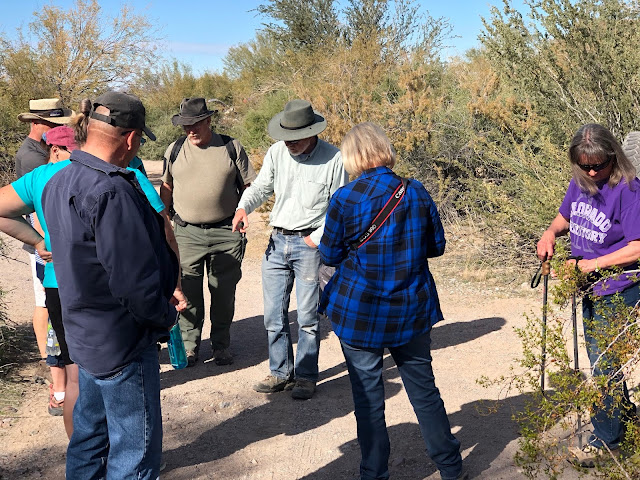 That is Ed, he is a retired geologist, in the light green shirt explaining what to look for and the best places to look.

This was taken up on the hill where I was hunting.

After the end of Boomerville, on Monday, Steve and I along with Ed and his wife Jan, headed back out to the area northwest of Parker to try and find the rest of the route we started out on earlier.
There is a route (676) that Ed had found both ends of but wanted to connect together. We did the eastern half earlier but lost the track and had to return. This time we started from the west end and worked our way east. 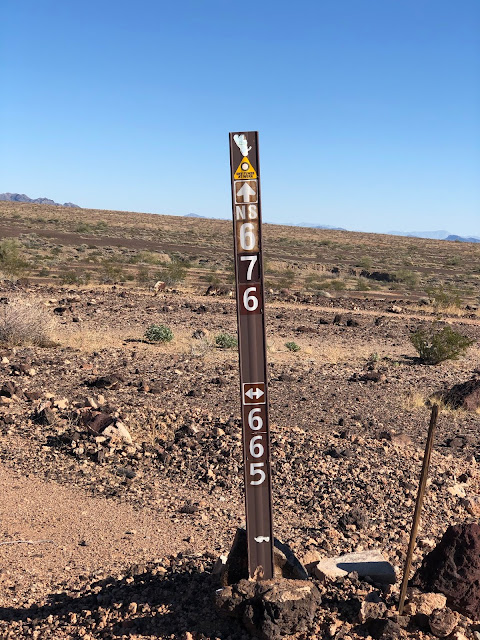 After 3 hours or so crawling across the desert on what would generously be called a goat track, we finally found our way to the spot where we lost the route earlier. It turns out we had missed it the first time by only about 10 yards! So close!
We did also get to go back to the old mine we had found earlier as well. We explored around a bit and got to check out the old mine tunnel, powder bunker and some of the old works. Very interesting place. 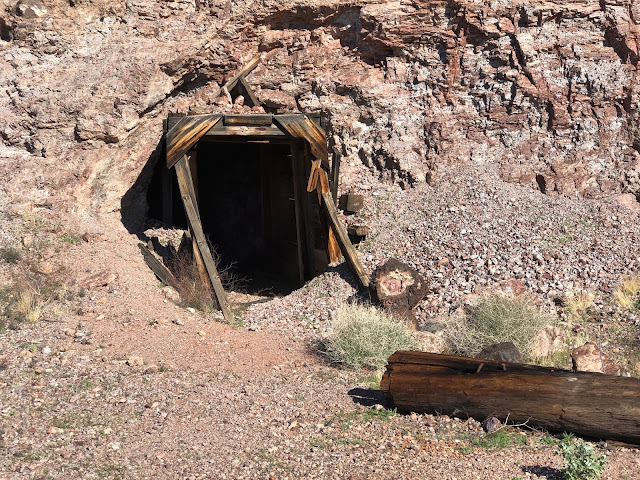 This is the entrance to one of the mine shafts. You could go in about 20 feet before the entrance was blocked by a heavy steel barrier. 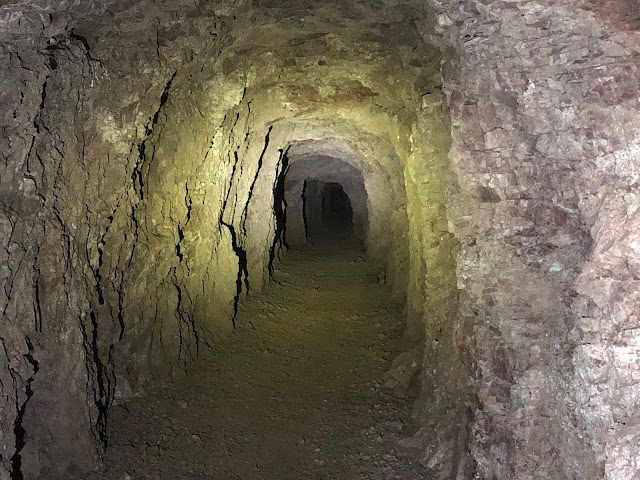 You could see quite a ways down the shaft and I have no idea how deep into the hill it actually goes. 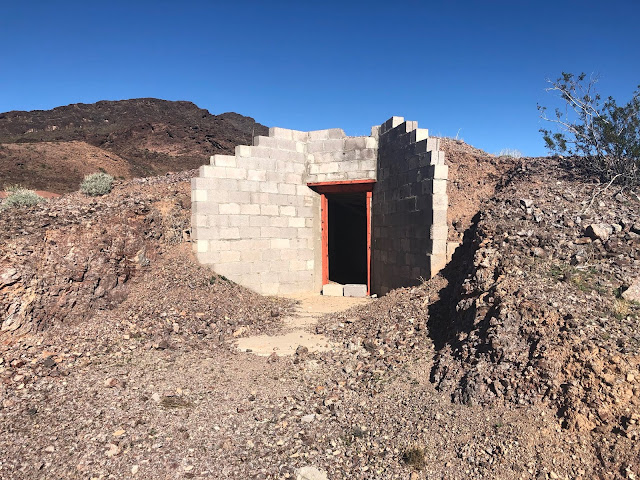 This is the one surviving powder bunker where they would have kept their explosives. 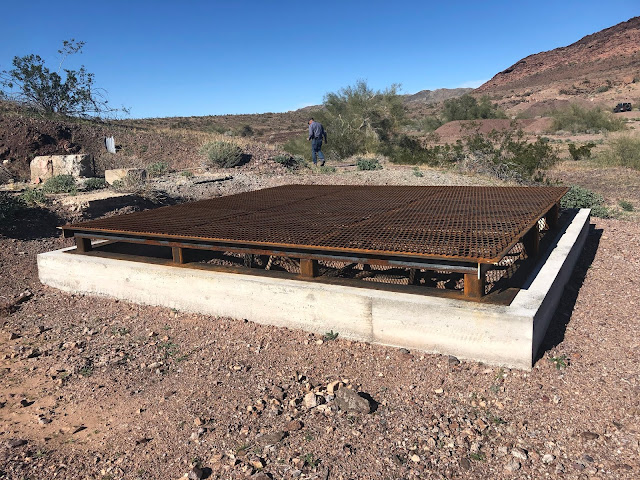 One of 2 vertical shafts that had been covered up. 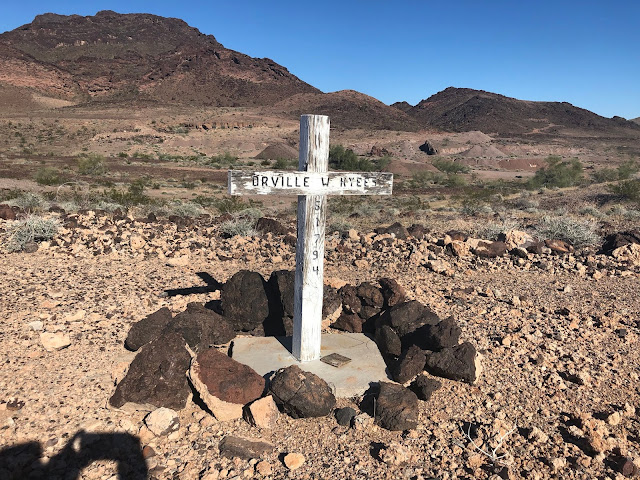 I'm not sure who this fellow was but he apparently passed away on June 17, 1994. I wonder if he owned the mine or just worked there.

As I write this tonight, we have left Quartzsite and headed north to Lake Havasu City. We had originally planned to go back to Peoria and the Pleasant Valley Airport but when we called to see about a spot they told us they were no longer doing dry camping there. There really isn't a whole lot of boondocking areas in the Phoenix area so we regretfully had to come up with another plan.
Steve and Tammie had told us about "Winter Blast" in Lake Havasu City, so we though we would give that a try.
Posted by Rob and Chris's travels at 8:50 PM