After our return from Anacortes on Tuesday, Aug 27, we made our way to Vernon and the Vernon RC Aeromodellers Larry Christensen Memorial Fun Fly. This event has been running for almost 20 years, always around the Labour Day long weekend. Like some others in the area, it started as a weekend event and has evolved into an almost week long event. We had arrived a bit later in the day so set up basic camp Tuesday evening and left the rest for Wednesday.
I got my airplane put together and one flight in but for the most part we just kicked back, relaxed and visited with other modelling friends also camped at the field.


Thursday we had to make a trip to Kamloops as we had a couple of meetings to attend and some chores to do in town. One of the meetings was at the Royal Bank as we had applied for a US VISA card. We wanted a VISA as we have on occasion, while in the states, wanted to shop at Costco and other than cash, they only take VISA. We had made the application in Vernon but this process also involves an interview with a client adviser. Vernon didn't have one available so we had booked an appointment with one in Kamloops. We had thought the interview would only take 20 minutes or so but it wound up taking almost 2 hours! Part of this however was due to some computer issues that the RBC adviser was having. Finally around 3PM we were done. As neither of us had had lunch yet, we stopped on the way out of town for a nice Japanese meal at Sushi Valley in Valleyview.
Thursday was Chris's Moms birthday but since we weren't in Vernon, Friday afternoon we had them, our friend Laura from Kelowna, and my Mom over for dinner. We were also joined by friends and fellow flyer Bob Scheer and his wife Wilma.
Saturday, brought more flying and in the afternoon and evening a fairly impressive thunderstorm which fortunately passed us by off to the East.


Sunday was pretty much the same but as we were leaving Monday morning, in the afternoon I started pulling stuff apart and packing up. One project I did get accomplished was the physical install of the new inverter we had picked up down south. I hope to get it fully hooked up when we have a couple of weeks of downtime in Kamloops after the SLAM Fall Classic which we headed to on Monday.
We were on the road heading to Salmon Arm by 9AM or so. Sandy Point at Salmon Arm is only about a 45 minute drive so we arrived in good time. We got signed in and parked in our new spot for this trip in fairly short order. We have been coming here for this and the spring event for the last 15 years or so and over the last number of years, Sandy Point has been increasing the percentage of seasonal sites they have. It seems, no sooner do we find a site we like, within a year or two, they convert it to a seasonal. Since we bought the Cameo a few years back, we have also been restricted to only certain sites that can take larger rigs. This year was even worse as our previous favorite site was again turned into a seasonal. We had scoped out an alternate with the idea of a bigger trailer and this fall we managed to shoehorn the new rig into it. I'm not sure they would have allowed it during the summer as we do hang over the road a wee bit and over the back border a foot or two but this time of year things are a bit more relaxed.
One thing about Sandy Point is they do not allow dogs! So, unfortunately while we are here, we have to take Maya to a sitter for the week. We have found a lady in Chase that looks after her. She has 2 small dogs of her own and although she works during the day, the dogs have the run of the house and even a doggie door to get out into the back yard.
Monday afternoon, our friends Paul and Joan from Eatonville, Wa arrived. They had the site right behind us booked. Once again, I got the airplanes put together and the flying commenced.


The weather all week has been just about perfect. We did have a storm come through Thursday night that brought thunder, lightning, wind and rain. The lightning show was one of the most spectacular I have seen in a long, long time! I had gone down to the beach to watch it when the wind came up. I wound up helping the Salmon Arm club hold down and dismantle their big tarp sun and rain shelter to stop it blowing away. All the while while lightning was arcing all around us. I have to admit, I was feeling a bit nervous hanging onto that steel framework.
Lots more flying over the last couple of days but tonight I get to take everything apart once again and get ready to head back to Kamloops.


Just around 8:30 tonight as I write this, another major thunderstorm is right over our heads! We are seeing lightning every few seconds with some within a quarter mile of us. Flash to thunder of only a second or 2. At least it is raining pretty good so hopefully that will keep the fires at bay. This is some of the most intense lightning I can recall in a long, long time. 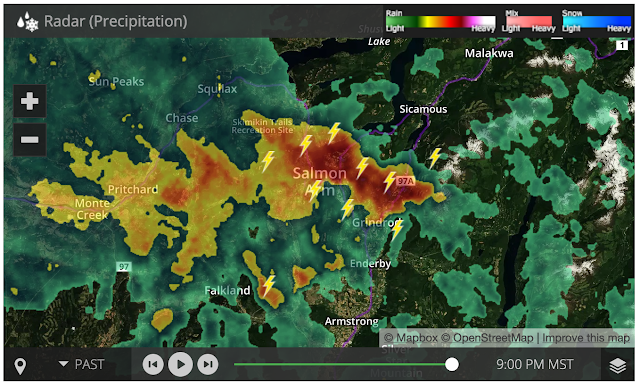 This is the current weather radar of the storm at 9PM. We are right smack dab in the middle.

Posted by Rob and Chris's travels at 8:18 PM