The GAF Spring Float Fly was originally started way back in the mid 1970's by the original Kamloops RC Modellers club. At the time, I belonged to the KRCM and our family owned a summer resort on the main arm of Shuswap Lake called Pine Grove Resort. We started the event around 1974 or 1975 and it quickly grew attracting pilots from all over southern BC and Alberta. When my parents sold the resort in 79, the event moved across the lake to Copper Island Resort for a couple of years then back to Pine Grove for a while. Around this time I was off pursuing my first career as a commercial pilot so lost track of the event but sometime between the mid 80's and mid 90's the event moved to Sandy Point near Salmon Arm and the Grindrod Air Force took over where it has been running successfully ever since.
The event has always been the first full weekend in June but since the GAF has been looking after it, it has expanded and now starts the Monday right after the Kamloops Spring Fun Fly and runs all week. We now regularly see pilots from all over BC, Alberta, Washington State and even one pilot who comes all the way from Tucson, Az!
This year we personally have a conflict with another event scheduled for this coming weekend. The Princeton Jet Rally starts Thursday so we will be pulling up stakes and heading over there today.
It is still early and folks are still arriving but there is a good selection of aircraft already here. 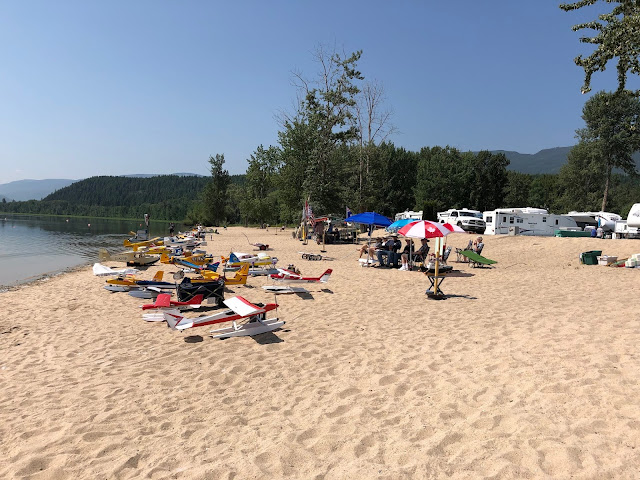 Last year when we were here, the lake was at flood stage with very high water. The water was so high, we had to pit our aircraft on the top of the dike that protects the campground. This year is an exceptionally dry year and there is a lot more beach than normal. These next photos illustrate the difference. 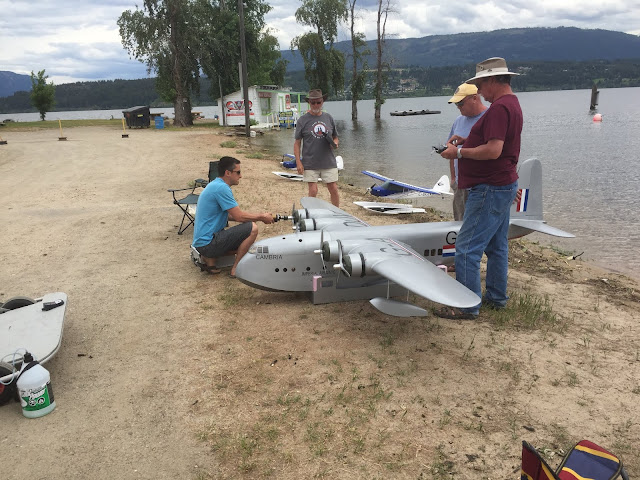 Steven Bondar prepping his new Short Brothers Empire Flying Boat for a flight. The full size of this impressive aircraft was designed in the 1930's.
Posted by Rob and Chris's travels at 7:49 AM