Since Saturday we have had some fairly nice weather although it has been a bit cool.
Sunday after the airshow was quite nice. Lots of sun and pretty warm. We didn't do too much or venture very far.
I was hoping to go flying with my friend Paul on Monday, but it was pretty windy so we decided to try again later on in the week. Chris and I did go out for a couple of hours and explored a bit of the Maricopa Trail. There is a section just north of us with a few geocaches that we grabbed.
It did calm down late in the day and one of the balloon companies decided to launch just up the road a bit. Several of their balloons floated down the runway beside us. 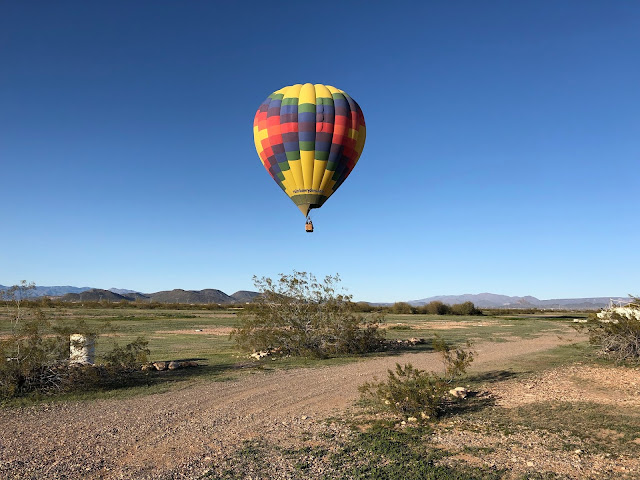 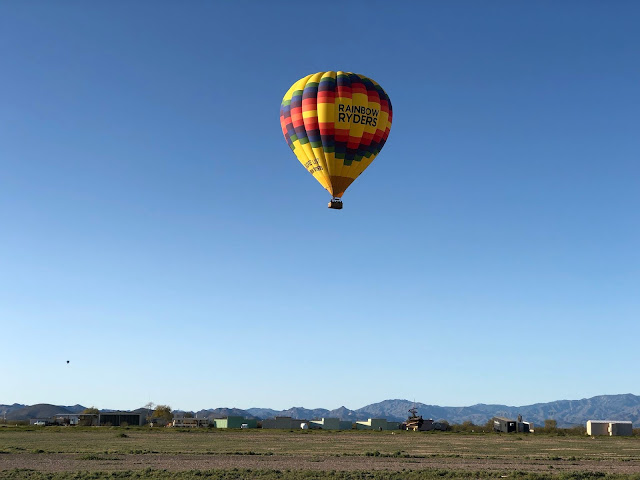 Tuesday, we headed down to Mesa, about an hour away, for what was billed as the "Canadian Snowbird Extravaganza". It was way over billed. There were about a dozen tables set up with representatives trying to get people to come visit their state, to companies flogging dentures! There were a couple of worthwhile exhibits that we took some literature from. One on travel medical and another by the Canadian Snowbird Assoc. There were also some live Canadian entertainers there but that didn't really interest us that much. We left after about an hour and did some shopping in the area then had a nice Japanese lunch before heading home.
Wednesday, we did get to meet up with Paul and Joan at the AMPS field for a couple of hours and I was able to get a couple more flights in with the jet. It was pretty cloudy but nice and warm for a change. I think I have it dialed in pretty good now and am feeling pretty comfortable with it. We also were able to plan out in a bit more detail what we want to do next week.
Wednesday night though the forecasted rains started. Things started off with a shower about 10PM but Thursday morning it started to rain pretty steady.
There is a factory outlet mall just a bit north of us so after breakfast we decided to go up and check it out. It was pretty much the usual brand name clothing stores and a few others. Chris found a couple of clothing items at one shop but I didn't see anything worth buying so kept my money in my pocket.
A quick stop at WalMart for a couple of items then back home again.
It rained most of the afternoon and into the evening with a forecast accumulation of about a half inch or so. Our parking lot is pretty wet and since it is just gravel over desert dirt, it is pretty soft in places. From what we have heard, California has been getting hit pretty hard. Hopefully our friends Lyle and Barb in Hemet are keeping their heads above the water.
Posted by Rob and Chris's travels at 9:27 PM