Saturday morning we headed back into town to look at a couple more furniture stores (didn’t find anything) and check out the Yuma Swap Meet. On the way we decided to swing by Mittry Lake to see how busy it was. We were surprised to find Don and Glenda Wicks who we spent Thanksgiving with, along with Thomas and Andrea Hentschel, a German couple we met at Borrego Springs with the other Boomers there. We stopped and chatted for a half hour or so before continuing into town.
Once we got into town the first stop was the swap meet. It wasn’t nearly as good as I remember it from last year though. What stood out this year was just how much junk; not new stuff, but old crap, people were selling. Also the stalls, for a large part, were crammed and disorganized so much so that in some, I could barely move around. Almost the whole time we were there, some girl was yammering away over a very loud PA about how good the meet was and how much the visitors were ‘family’. We didn’t have a good feel about the place so didn’t stick around too long. We had Maya with us and she didn’t like all the noise either.
After leaving the swap meet we stopped at the local Sears store. Sears here is closing and had some good sales on but we didn’t find anything we really needed.
Chris had previously ordered a second pot for her Instant Pot from Target so we stopped by there on the way home to pick it up. After that we stopped for lunch at Ninja Sushi before heading back to the trailer.
After sundown the wind picked up but not too bad. We were gently rocked to sleep.

Woke up this morning and decided that if it wasn’t too windy, I would take the Carbon Cub out to the local airstrip for a couple of flights. As it was, after breakfast, it was a bit breezy but not too bad. I charged up a couple of batteries and put in a couple of flights. I did manage to avoid all the creosote bushes this time! When I got back our neighbour came over and we had a good chat. His name is Ron and he and his wife hail from New Hampshire. They spend at least 6 months here every year. He also flies models but was tied up with Sunday chores this morning so couldn’t come along. Maybe another day. After lunch we had a nice visit from Gerry and Marilyn Gerow. Gerry is a fellow KMAS (Kamloops Model Airplane Society) member from back home.

This is the model airstrip just up the road a few hundred metres.  Someone found a nice flat chunk of desert and cleared all the rocks off then smoothed it out. It's actually not too bad. About 250' long by 30' wide. 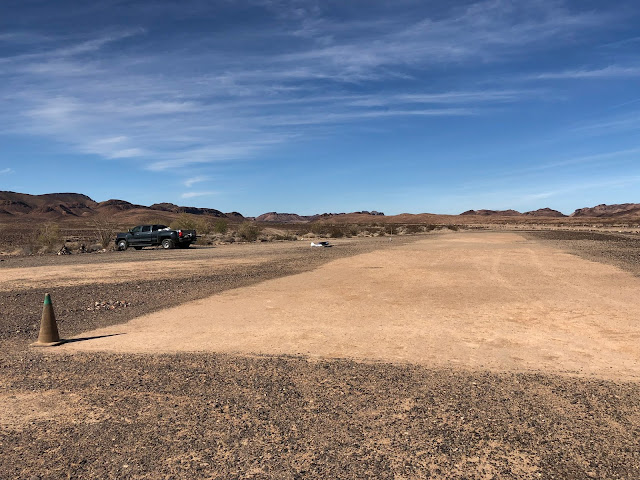 Posted by Rob and Chris's travels at 5:14 PM