Wow! It’s been a solid year since my last post. I guess there just wasn’t enough that I thought was all that interesting to post about.
So here is a bit of a recap of what we did do.
As you recall, we had just settled in for the winter at the Desert Gem RV park in Oliver BC. The first couple of weeks was spent getting the trailer skirted and some other preparations for winter taken care of.
I should back up a bit first though. Recall when we were in Kamloops, we had a check engine light come on in the truck while we were towing from Okotoks to Kamloops. In Kamloops, the GM dealer changed a fuel injector and sent us on our way. Well, while towing to Oliver, the light came on again just as we were getting into Vernon. Once we had things organized in Oliver, we took the truck into the GM dealer in Penticton where they diagnosed more injector issues. This time they changed another 2 and sent us on our way. Stay tuned, more to come on this topic.
Back to Oliver and around the end of November, Chris got a part time job at the NoFrills grocery store as a cashier. She wanted something to do while we were there and this got her out of the house and allowed me some time to myself. She was working 4 hours a day and usually 5 days a week.
One thing I had wanted to do for a while was to get back into my electronics hobby somewhat. I am not a winter flier and wasn’t planning on spending a lot of time flying my models over the winter. One of the avenues I wanted to explore was some small microcontrollers. There are a couple major players in the market and the one I decided on was the Arduino platform. I started with a mid level experimenters kit and spent the rest of 2020 learning the ins and outs of the platform. A large part of the Arduino is the programming. It uses a version of the C++ programming language which is something I hadn’t even looked at in many years. I also remembered rather quickly why I had never gone into programming as a career. As a programmer, I suck! I can muddle my way through basic stuff and given enough time can usually overcome most challenges but I most definitely cannot call myself productive! I did find it rather enjoyable though.
I started with some simple stuff but then spent a fair bit of time developing a new holding tank monitoring system for the trailer. It took a while but I did get it to a point where I think it would be a significant improvement over the stock system in this trailer. It currently is at a point where it is pretty much ready for installation. I just have to finalize a couple of hardware challenges and then get it installed. Hopefully this winter sometime. I also came up with a couple of other projects that are 95% complete and I’m just looking for the right time to finish them off and get them into use.
Other than COVID which affected everything, the winter went pretty well. We stayed warm and healthy, nothing froze up, at least not seriously and we emerged in the spring ready to get on with things.
At the end of March, we packed up and hit the road again; this time back to Vernon for a few days to visit with family, then on April 1st, back to Kamloops for a couple of weeks. While there we took care of the usual medical appointments and stuff.
At the end of the previous season at the Okotoks Lions campground, we had told Pauline, the manager, that we would be interested in returning for the next season so on the 15th we packed up and headed east.
About 45 minutes before getting there, guess what? The check engine light came on again! We arrived in Okotoks late, spent the night in the parking lot and the next morning got in and parked. Soon after that, I took the truck up to the Okotoks GM dealer and they diagnosed more injector issues! This time, rather that changing more injectors, the changed out the engine control module along with a couple other minor bits and sent us on our way.
The first couple of weeks were spent getting the campground ready which basically was cleaning up the rest of the leaves from last year, getting the water turned on, signs up and all the usual maintenance items on the equipment after their winter storage.
We also had 2 new host couples to get to know.
As COVID was still ongoing, we opened at half capacity, the same as we ran all last year and again, no tenting as the washrooms were kept closed as cleaning and keeping them sanitized would have been a nightmare.
I won’t go into too much detail about the campground as it was pretty much a repeat of last year.
One thing we did do shortly after arriving though was go get our first COVID vaccine shot. It seemed Alberta was a bit ahead of BC in that regard. That made us feel a lot better. In fact the numbers in Alberta were looking pretty good and getting better and it didn’t take long before Pauline decided to open up about half of the remaining sites. And again about  month later, most of the rest of the restrictions were lifted and she opened almost all the rest. That brought us up to around 50 sites of 55 in use.
The end of June, we received our 2nd COVID shot and while leaving the location, I noticed some movement in some bushes right beside the clinic. It was a Mule Deer doe who had just (within the previous few minutes) give birth to a fawn! 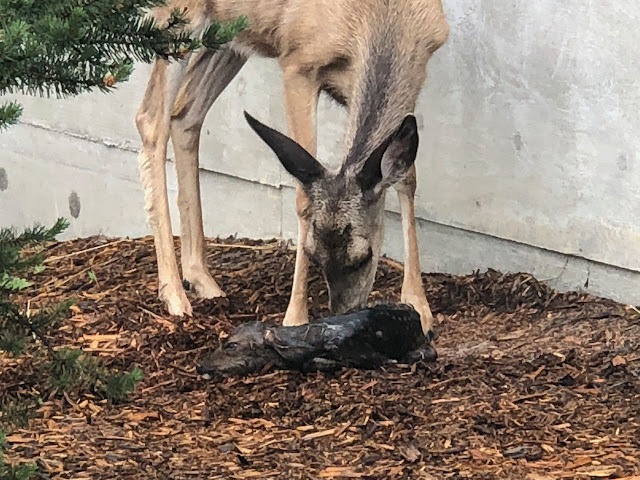 One thing about this summer that was quite different was the extended heat we experienced over the summer. We didn’t get the high 40’s like parts of BC but by Alberta standards it was damn hot! One thing I have never been good with is heat. I have to say, during the hottest parts of the day, I was struggling. Complicating this was Alberta was getting a lot of the smoke from the BC wildfires which made breathing difficult as well. 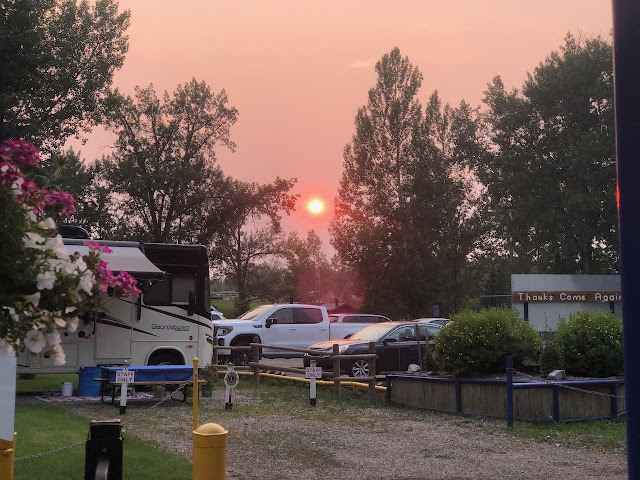 We did get away a couple of times. The first time was around the middle of July. We headed back up to the Propbusters club in Red Deer. I was able to get some flying in and some much needed time away from the campground.
The second time was in the middle of August to a small community campground just south of Okotoks called Archie and Janet Hogg park. Again it was for a weekend and just to get away for a bit. The first couple of days were still hot and smokey but while we were there, the weather broke and Southern Alberta got the first good rain it had seen in several months. 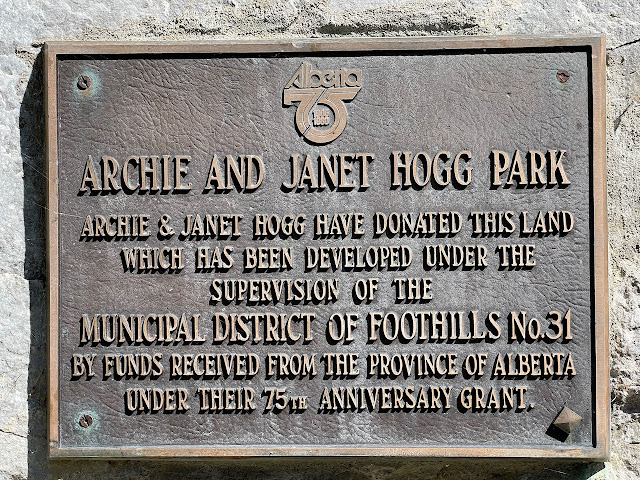 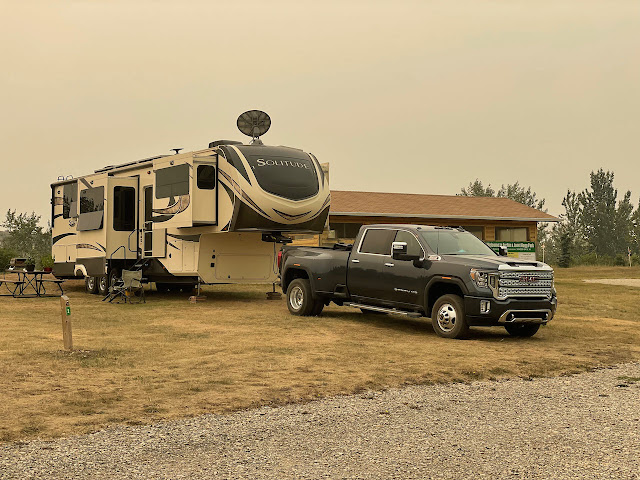 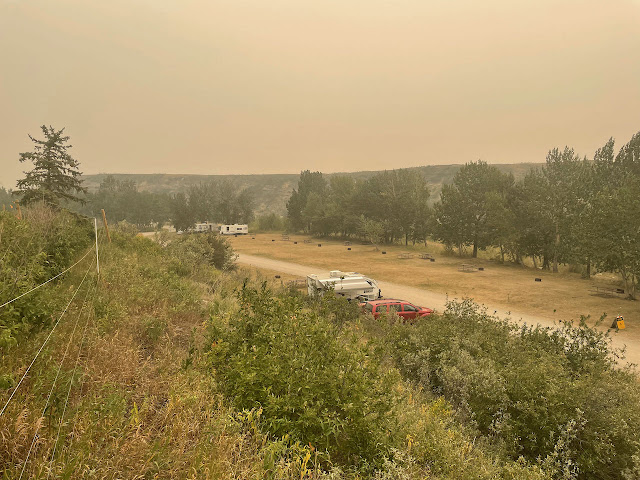 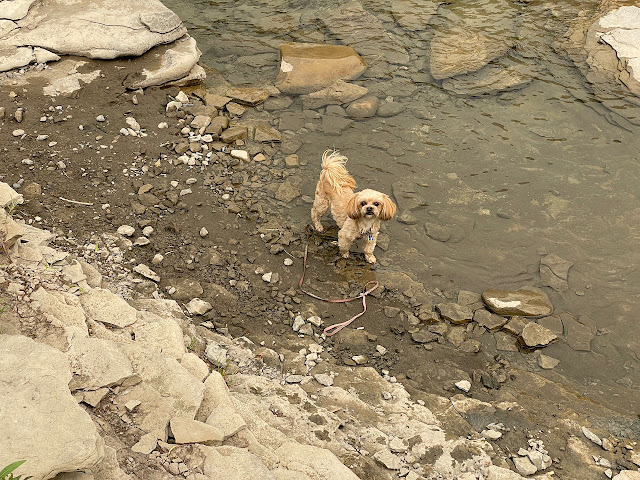 A couple of weeks later, we busted out again. This time up to Edmonton for the first organized model event we had been to in almost 2 years. This was the Bruce Bender Memorial Scale Fun Fly. We had an enjoyable few days there and it was nice seeing friends we hadn’t seen in quite a while. It was memorable in that while flying my jet, I had a minor structural failure halfway through the first flight. The right hand flap blew off during a high speed pass. Fortunately it didn’t cause any serious handling issues and I got it back on the ground without issue. 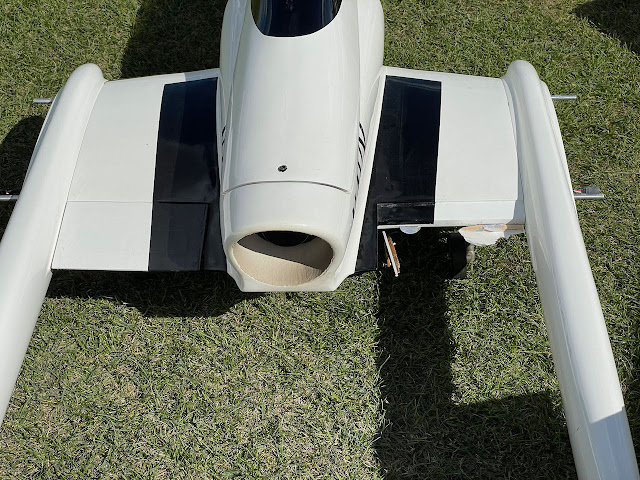 As luck would have it, while headed up there, around Red Deer, that damn check engine light decide to make another appearance. There wasn’t anything we could do about it then but when we got back, it was back to the dealership again. This time, while it was still showing the same injector related codes, they decided to just change the fuel filter even though it wasn’t really dirty.
During all this time, the Canada/US land border was still closed to non-essential traffic which meant that we wouldn’t be able to drive across to go south for the winter. And one thing we were sure of, was that we didn’t want to spend another winter here. As Canadians could still fly into the US we found that there were a number of commercial hauling companies that would be able to transport our truck and trailer across while we flew. We made arrangements with one such company to take our rig across and a small charter airline to fly us across for October 25. At least now we had plan for the winter.
We closed up the campground at the end of September and spent the next few days putting it to bed. The last thing was to blow out the water lines which we did on October 5. That afternoon, we pulled out and made our way back to BC.
And guess what? Around Canmore, our old friend the check engine light makes another appearance! Really? Again, not much we can do about it and as it doesn’t seem to affect performance any we carried on to Kamloops and our usual spot at Silver Sage.
As soon as we could, it was to the GM dealership again. This time after consulting with GM Canada, they decided to replace all 8 injectors. As none could be found in Canada, they had to get them air shipped in from the USA somewhere. They changed all 8 this time and sent us on our way. It sure is a good thing that this is all being done under warranty as each one of these service visits is an all day thing for a tech. I can’t imagine what the repair bill would be if we had to foot it.
While still in Kamloops we heard that the US had finally decided to open the land border to fully vaccinated travelers on Nov 8. After some discussion (slightly heated at times), we decided to forgo the truck/trailer transport for the 25th, save the appropriate. $2,000 cost and wait a couple extra weeks and drive ourselves across.
We spent an extra week in Vernon where we could spend some more time with our families which was nice and then this morning hitched up and headed south.
That is where we sit as I write this. We are parked about 3 Kms from the border in Osoyoos and plan to head out first thing tomorrow morning. Now, I just hope half of southern BC doesn’t have the same idea! We have already heard there is quite a lineup waiting at the border to cross. We shall see in the morning.

Posted by Rob and Chris's travels at 8:48 PM