Settled in for the winter

I have left this entry a bit longer than I had planned. Just not in the writing mood I guess.

Anyway, our last couple of weeks in Okotoks were spent starting to get the campground ready for winter. With all the Poplar and Cottonwoods trees around, we had lots of cleanup. The leaves started coming down in early September and by the middle of the month, it became pretty much a daily chore to clean up as much as we could.
Years ago when we had our resort on Shuswap, that meant lots and lots of raking. My brother and I were fortunate in that we were able to avoid some of it as we had school, but we did get our share on weekends.
Oh, I would have loved to have one of these back then! 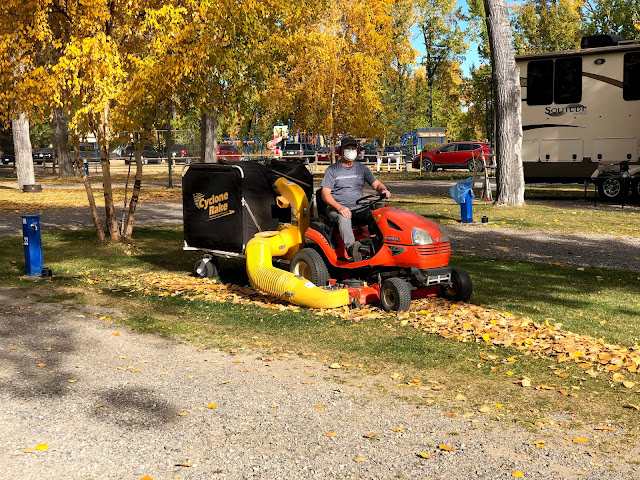 We use leaf blowers to blow the leaves off the roads and onto the grass, and then the Cyclone Rake makes short work of vacuuming them up and mulching them.
Other chores were taking all the signs down and putting them away, storing the equipment, putting picnic tables away and lastly, after everyone had left Oct 1, blowing out the water and irrigation lines.
We finished up with the water blow out in the early afternoon on the 2nd and as there wasn't much left to do and the weather was looking good, were given the OK to leave. Both Chris and I enjoyed our summer in Okotoks and given the opportunity, will likely head back there next year.

After leaving on the 2nd, we made it as far as Kananaskis and pulled into the Stony Lakoda Casino for the night. We have stayed here in the past and as an overnight stop, it is perfect. Just far enough off the highway to be fairly quiet. By nightfall there were probably 15 other RVs doing the same thing. 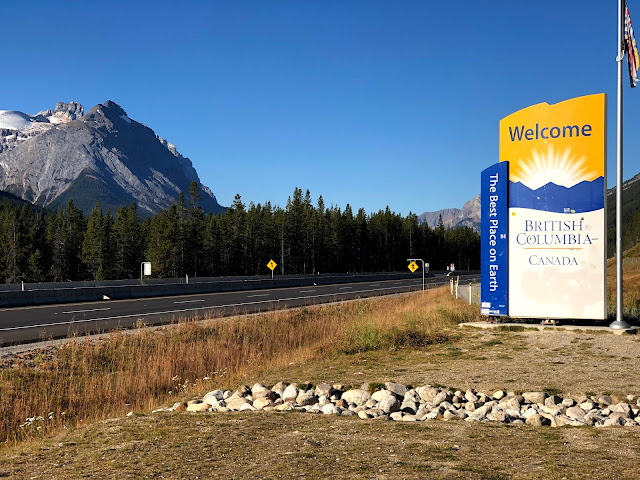 The next morning dawned, as we used to say back in my flying days, 'severe clear', and we headed off for BC and our next stop back at Silver Sage in Kamloops. We needed to be there for a couple of weeks to take care of several appointments. We had stunning weather all the way through the Rockies and all the way to Kamloops.

The only hiccup was just before getting to Kamloops, we noticed our check engine light on. Everything else seemed fine, the engine was running OK and all temperatures were in the green so I wasn't too concerned.

A couple days after arriving we noticed another Solitude pulling in. And it was being pulled by almost the identical truck as ours. They wound up parking right beside us. Other than the colour of their truck being slightly different, they could be twins!
We quickly got to chatting and found out they were Hal and Bonnie Dennison. A couple from Ontario who also have recently taken up the full time lifestyle. They were stopping off in Kamloops for a bit on their way to their winter digs at Harrison Lake.
Interestingly enough, their check engine light had also come on! 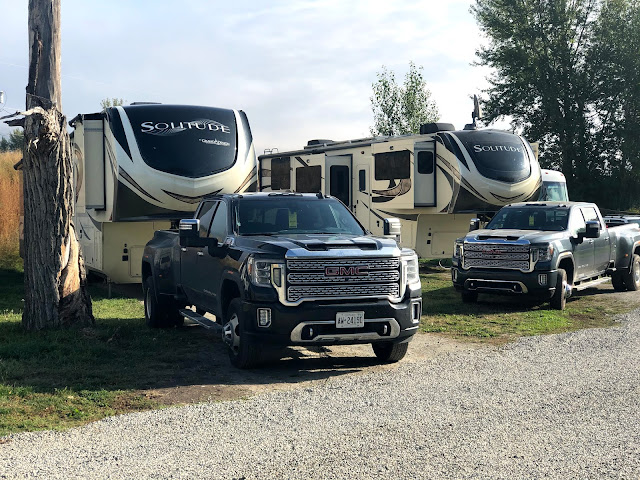 We had our truck booked into Zimmer GM to get it checked out the next day and Hal had his booked right after us.  The diagnostics on ours showed one bad fuel injector and possibly 2 others that may also have an issue. They didn't have the parts on hand so booked us for a return visit the next week.
Coincidentally (or maybe not) Hal and Bonnies truck also was diagnosed with injector problems. As they needed to be moving on shortly, they got priority on the first repair which was OK with us.

One of my chores to take care of before winter was to clean the roof. Being parked under 3 big poplars all summer had made a real mess. All the pitch that rains down coupled with the dust from the roads had left the roof filthy. I hadn't realized how bad it was until I started. I think I went through 2 pails of elbow grease, not to mention a gallon of sweat! This is how it looked after day 1. It took 2 more days to get it all finished up. Note to self: Don't leave it so long next time! 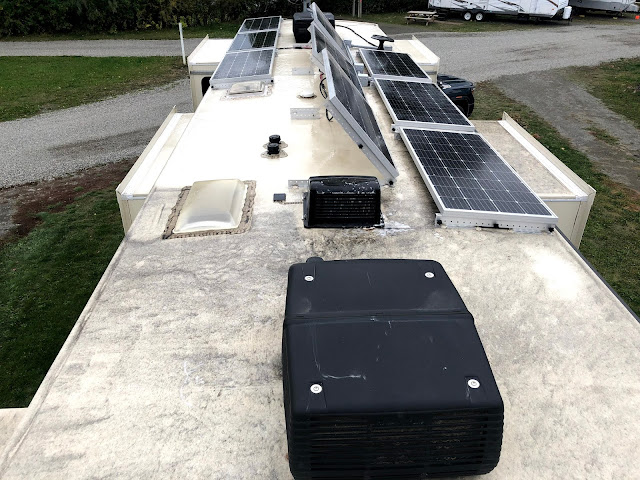 Another chore I wanted to get out of the way was to clean up some of the wiring and propane lines in behind our fridge. When we swapped it out last summer, the tech didn't have all the proper parts to make a clean install so we used what we had. I tend to be a bit anal on stuff like this and it just didn't sit well with me so decided to clean it up. I found the propane fitting I needed to do it right and spent probably a couple of hours at it. Here is a before and after pic.
Another project was to make up some cribbing. When we get to our winter site in Oliver I wanted to block the trailer up on something more solid than our hydraulic jacks. Especially since we would be in the same location for upwards of 5 months.

Just up the road from Silver Sage is a truss plant. They bundle up their off cuts and sell them for $25 for a cubic meter. We bought one of their pallets and I cut up a bunch of pieces 1 foot long which I then screwed together into 6 cribs about 12" high.

I also cut a bunch of extra pieces as I didn't know exactly what I would need when we got to Oliver. This used about a quarter of the pallet load so I advertised the rest on Facebook Marketplace for free and someone came and took them away the next day.

On the 27th, we pulled up stakes at Silver Sage and headed for Vernon.  We planned to spend 5 or 6 days there before making the final push to Oliver. This allowed us to spend a bit of time visiting family and allowed Chris to spend her birthday with her parents.

Oh, and guess what? The check engine light on the truck came back on. I guess they should have changed out those other 2 injectors after all. I guess we'll have to deal with that after we get to Oliver.

Nov 1 we headed the last 160 km or so to our winter digs at the Desert Gem RV park. This is a smaller park right across the road from the Oliver airport. By the look of things they have 35 or 40 rigs here for the winter. Most, like us, frustrated snowbirds who are unable or unwilling to head south for the winter.

Setting up took a bit longer as I used the cribbing I had built earlier to add extra stability to the trailer. As we will be parked for 5 months or so, I wanted to make things as stable as possible. Also to take the pressure off our hydraulic levelers. Over the next couple of days we collected the remaining items we would need for the winter.  Heat tape for our water hose and some materials to skirt the trailer.

I was surprised that we couldn't find anything suitable at any of the building supply places in the area! We had to go all the way back to Kelowna and Home Depot to get the type of foam board I wanted. I settled on 1" Durofoam which has a silver side. It was also one of less expensive options at about $16.50 / sheet compared to $25 or more for the blue or pink stuff.

Day 1 was a very nice day and I was able to get the back end done up to just behind the wheels. 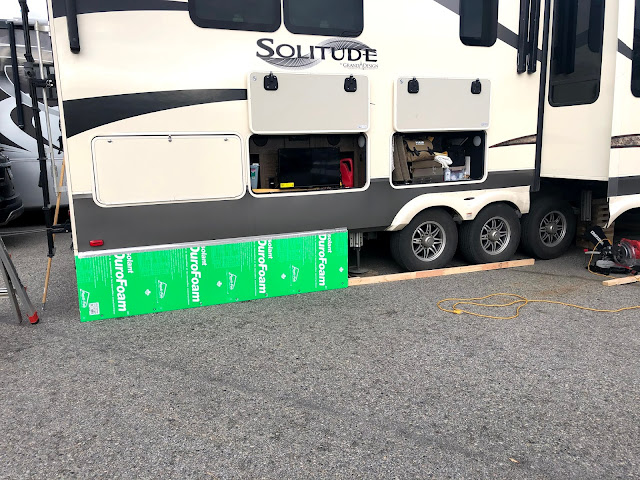 Day 2 was very windy and it was a struggle to manage the foam sheets. Everything had to be weighted down or they tended to blow away. I was able to get around the front end of the trailer done however which left mostly just the two big kitchen slides.
Day 3 was, if anything, windier and also cold so I decided to sit that day out.
Day 4 while still cool wasn't as windy and I was able to finish the chore off. One thing I have done is put one of my remote temperature sensors under the slide on the left side so I can keep tabs on the temperature underneath. While our water hose is heated, there are a couple of places where our sewer hoses are exposed and I would rather they didn't freeze although it wouldn't be a big deal if they did.

As it turned out the night after I completed the job, the outside temperature dropped to about -8C overnight yet the underbelly stayed at a relatively balmy +6C. I think I can call that success!
We have also noticed the floors inside are quite a bit warmer as well. 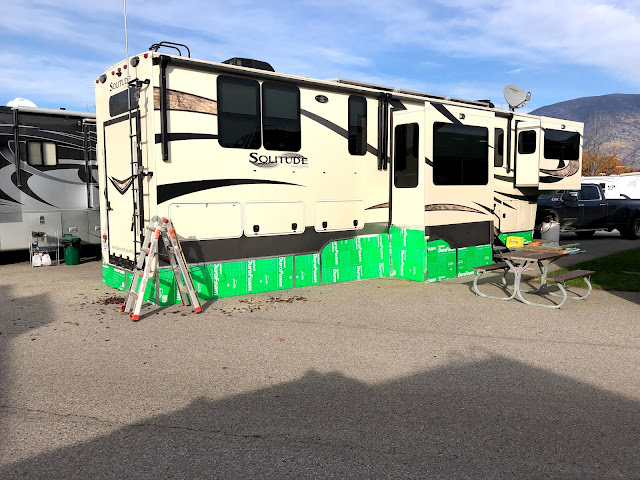 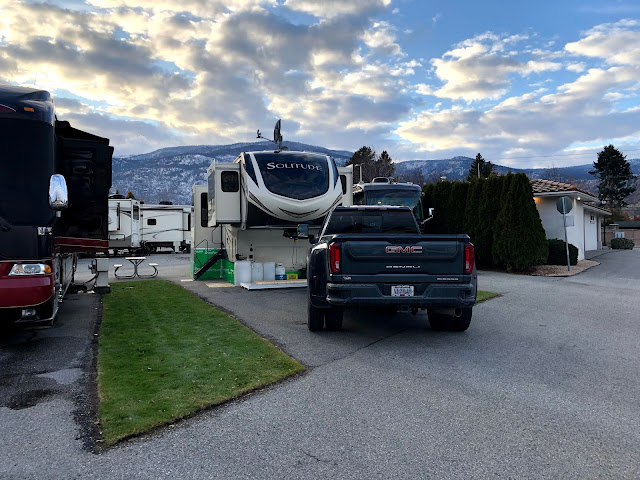 In this shot you can see that this park is a bit tight but we have enough room for what we need. Not visible and just in front of the truck is our 350+L propane PIG. This should satisfy our cooking and heating needs for the winter. The company that rents the tanks will come by every couple of weeks or so and fill it up as needed. This will hopefully be cheaper than constantly taking our small 30 pound tanks to the local vendor. Time will tell I suppose.
Posted by Rob and Chris's travels at 8:17 PM