Time for another catch up

The last 2 weeks have been, depending on your point of view, either pretty quiet or kinda busy.
After packing up at Sandy Point we headed back to Kamloops and the Silver Sage RV park. We have 2 weeks here where I have some planned work to do on the trailer. I am starting to get things in order for our mid October departure for points south. We also needed to access our seacan to recover a few items we had stored away. 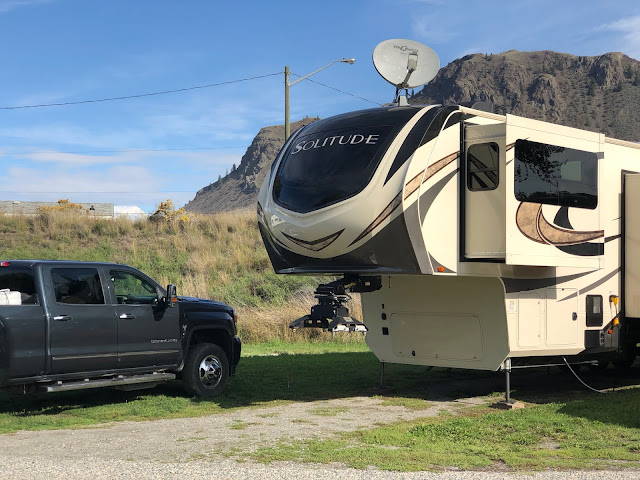 One of the things I needed to do was give it a much needed bath. It hadn't been washed since we picked it up in Edmonton back in June and was pretty dirty. That took about 2 hours but the truck got a wash too.
Last Sunday, we headed to Vernon for a couple of days, leaving the trailer in Kamloops. Chris was flying down to Nanaimo with her Mom and Sister to visit her niece for a week. We stayed with Chris's parents Monday and Tuesday then took Chris and her mom to airport in Kelowna. After that I made my way back to Kamloops and the waiting trailer.
One of the key items I had on my list was the installation of a skid plate under the frame at the rear. Reading some of the Grand Design forums on-line, some owners have managed to snag the bottom lip of the rear wall on either the ground or an object and actually wound up ripping the entire back wall loose! I didn't want that happening to us especially as we do go off road a bit when down south. One preventative solution is to attach a steel plate between the rear two frame cross members and extend it to just behind the back wall. Hopefully that should provide enough protection so that if the bottom does drag it won't cause any serious damage. Dragos Spring & Welding in Kamloops did the work and by the look of it did a good clean job.

Here is a before picture showing that it would be quite easy to snag the back end. 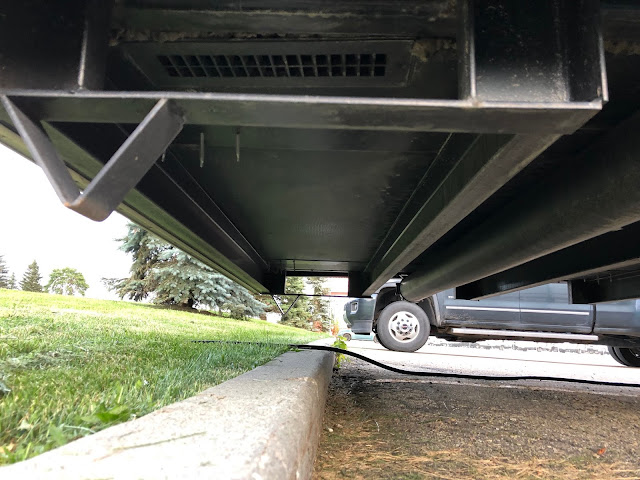 And the after photo 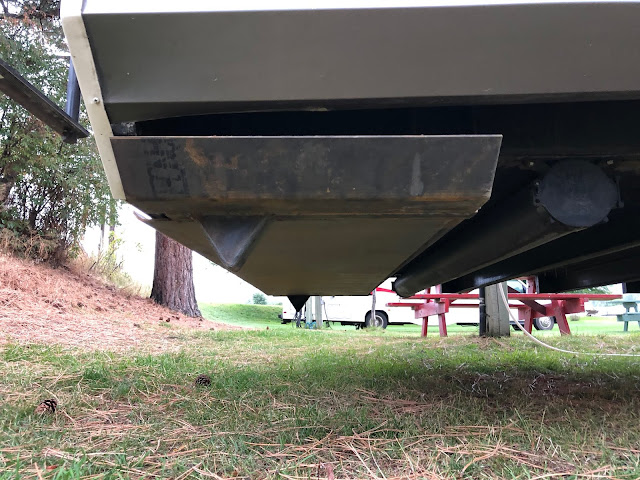 They also reinforced those little triangular bumpers as well
The other major project I needed to complete was finishing up my inverter install. The inverter is the device that gives us 110 volt power to run things like the TV, microwave, coffee maker, etc. when we don't have a shore power connection. The inverter converts our 12 volt battery power to the 110 volt AC power.
To connect it up I had to splice in and extend some of the power wires from the midships compartment to the front where the inverter is as well as make up some new heavy battery cables. All told that took about 2 full days with me scrunched into some pretty small spaces at times. At some point in the future I want to move all that gear into the midships area so I also spent some time tidying up the rats nest of wires that Grand Design left in there to make more room for that.
But it is all done for now and seems to be working well. We will know for sure later this week when we are camped at the Princeton airport for the Fall Jet Rally.
I also had a few other small projects that I was able to take care of as well.
Sunday morning I packed up the trailer and headed for Kelowna to pick Chris up at the airport. After that we carried on to Princeton where we will spend a few nights at Rivers Edge Campground before heading up to the airport on Wednesday.

One other thing I did was to add my 2017 travel log and mapping to this blog. If you are reading this via a subscribed email, you can access the log entries and mapping on the blog site, http://robandchristravels.blogspot.com.
Posted by Rob and Chris's travels at 9:22 AM