Since my last entry we traveled to Edmonton as we had an appointment to get some warranty work done on the trailer. During our first month we had found a few things that we needed taken care of so I put a list together and ranked the items in order of importance. Our appointment was for Wed morning at 8AM so we had everything ready, or so we thought. At the appointed time we checked in and went over the list with the service department who then did a walk around. I guess to check for any pre-existing damage. All seemed fine so Chris and I left as we had some errands to run in town. We returned about 3:30 to find them still working on the trailer so we hung out in the waiting area til about 4:30 when they said they were done.
We then went over the work they had done. Despite telling them the priority list, they had knocked off all the low priority items and hadn't done anything with the important stuff.
The two highest priority items were the black tank flush which wasn't working and the fridge doors which don't seal properly. The excuse for not working on the black tank was that they claimed we hadn't emptied it because the gauge showed it was still full. The gauges on black and grey tanks are notorious for not working and we had told them it was empty. As for the fridge, they said they couldn't do anything if it was still full. It would have been nice if they would have told us about that up front!
They offered to continue working on it the next day but we decided to wait and rebooked it for the following Monday as we wanted to take in the Edmonton Radio Control Societies (ERCS) fun fly and airshow running through the weekend so off we went.
We arrived at the ERCS field Wed. evening and got ourselves set up. Our friends Bob and Sherrie Wonitoy were already there and were able to show us the facility. I have to say, they have one of the nicest RC flying sites I have seen. They have 2 very well manicured grass runways so wind direction isn't an issue and no obstacles to worry about. They have power for charging batteries and a really nice fire pit for evening gatherings. 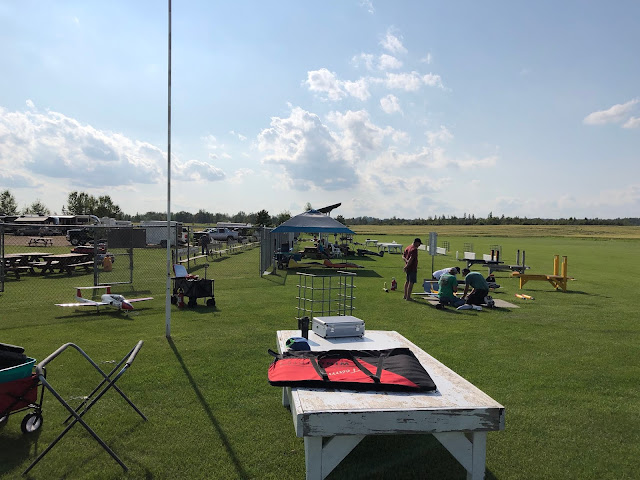 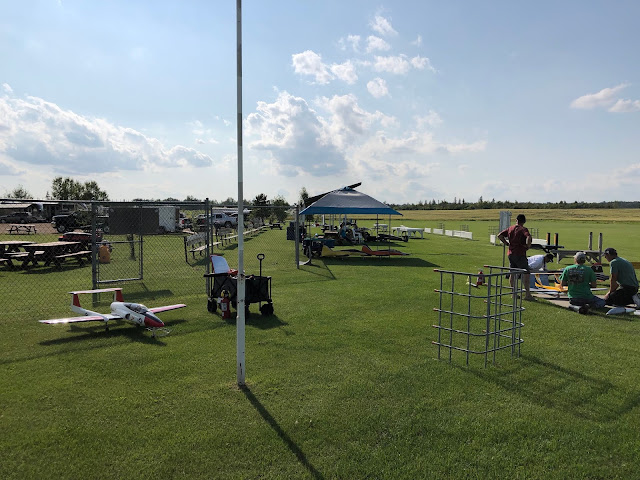 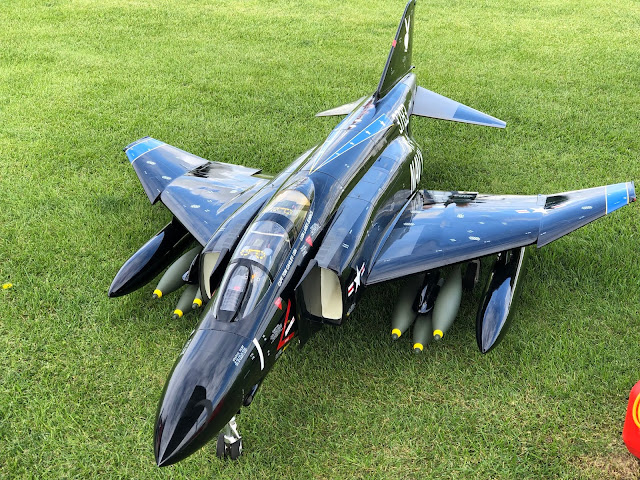 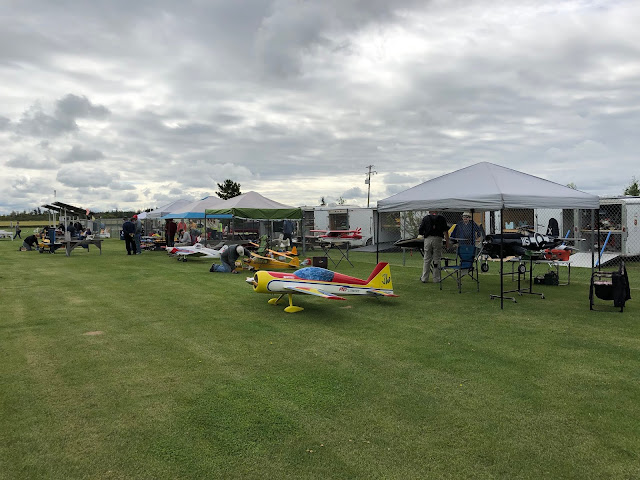 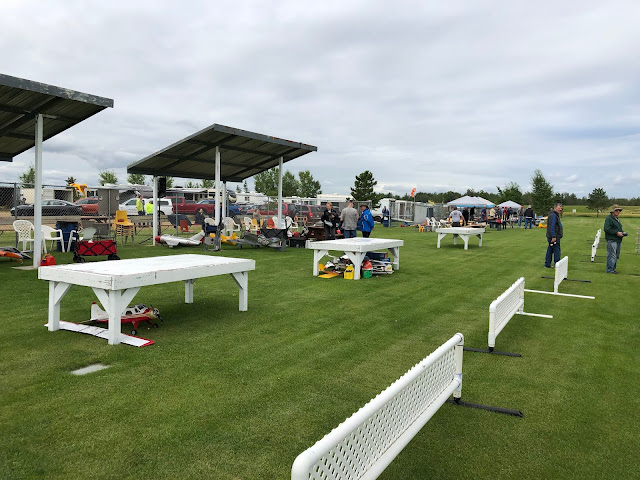 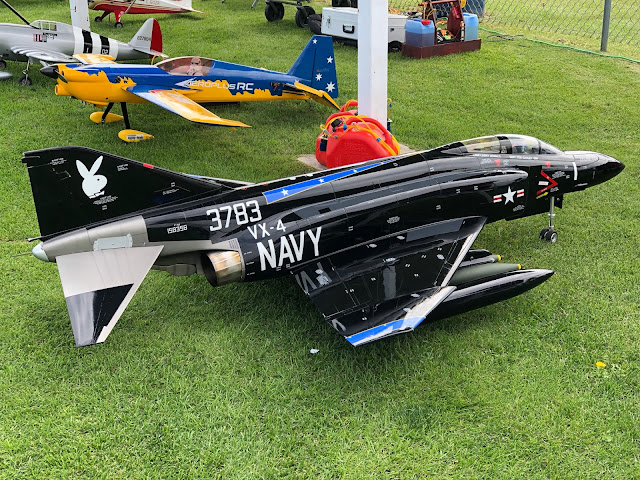 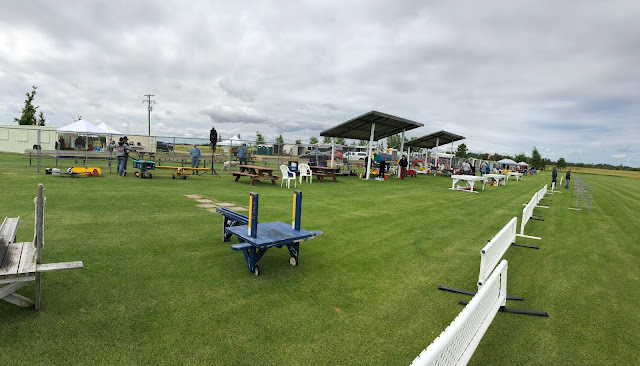 I got a few flights in Thursday and Friday and then Saturday morning it was all about getting ready for the airshow. The ERCS does this every year. They put on a show for the public and only ask for a donation to the local food bank as admission. They had all types of acts from control line to gliders to warbirds to jets. I put in a flight with my Elan about 2PM in the afternoon. All in all they had over a hundred guests for the day.
I should also add that I had woken up with a bit of a scratchy throat that morning as well.
Sunday, we packed up and headed back to Woody's to get the trailer ready for the follow up appointment Monday morning. My scratchy throat was now a sore throat and moving into my head. It looks like I have come down with a head cold!
For this visit we decided we would only have them work on the black tank flush as, while not ideal, we can manage the fridge issue for now. We gave them the trailer Monday morning and went off to do some more shopping and errands. We were done by noon so basically just hung around for the rest of the afternoon until about 3 when they said they were done. They were able to get the black tank flush done this time.
Once done at Woody's we decided to hit the road and head south towards Calgary. The hope was to make it to Canmore or Kananaskis by the end of the day. We were able to make Kananaskis and spent the night at the Stony Nakoda Resort and Casino.
Tuesday we carried on and made it to Vernon where we needed to pick up our mail and do some laundry as well as a visit with Chris's parents. I wanted to visit my Mom as well but didn't want to chance giving her my cold so made do with a facetime visit.
Wed. we headed for Kamloops and another fun fly. This time the High Country Flyers Big Bird event at the Kamloops Tournament Ranch. 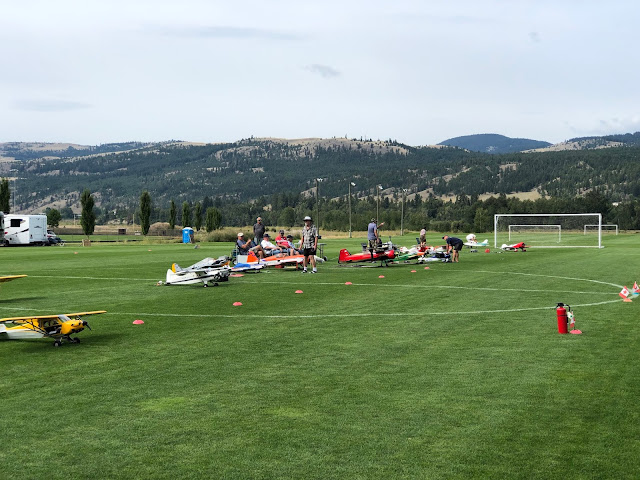 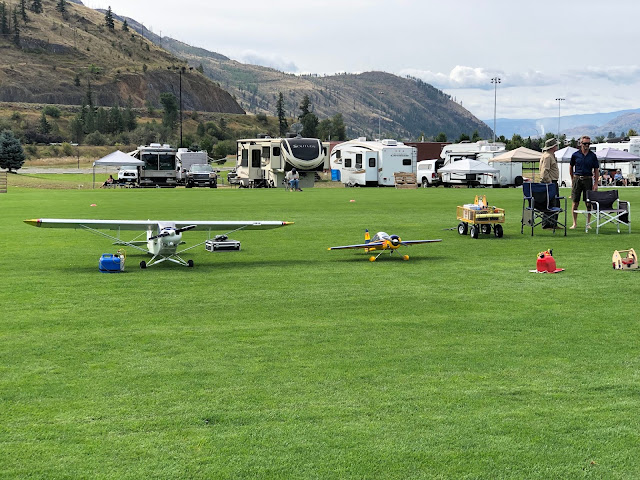 My friend Dave Volker was playing with a new camera that tracks a small electronic tag. We strapped it on my big Super Cub and I did a flight. It actually turned out pretty good. Once I get a chance to edit it a bit and have some more bandwidth, I will try and get it posted.

Posted by Rob and Chris's travels at 8:50 PM