Summer to winter in 24 hours

Before I get too carried away, I promised a few more shots of the Valley of Fire.
These are some cabins built back in the 40's I believe, shortly after the park received its state park status. 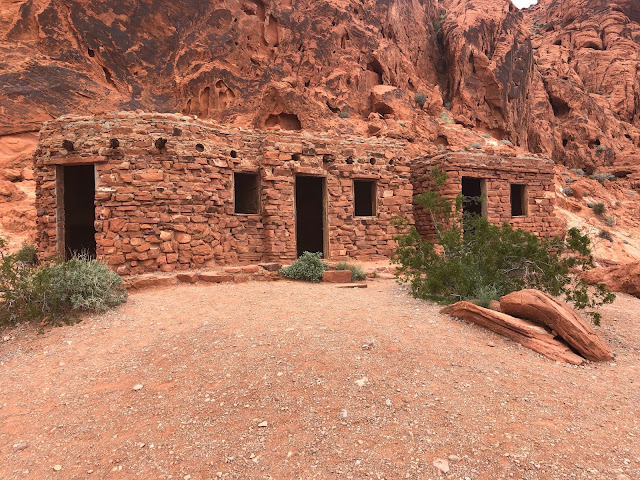 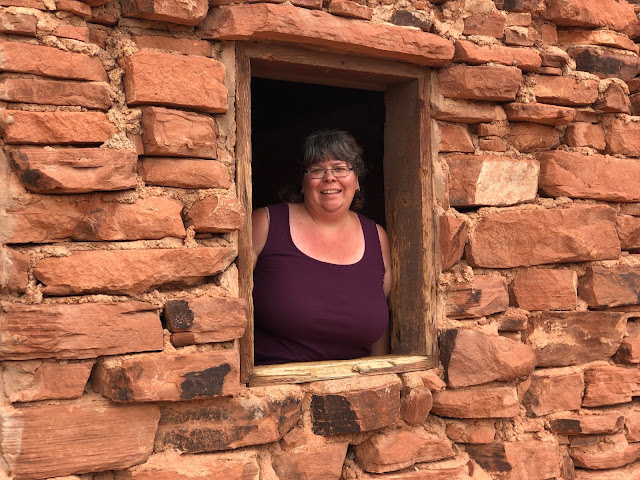 Some interesting erosion patterns near the cabins. 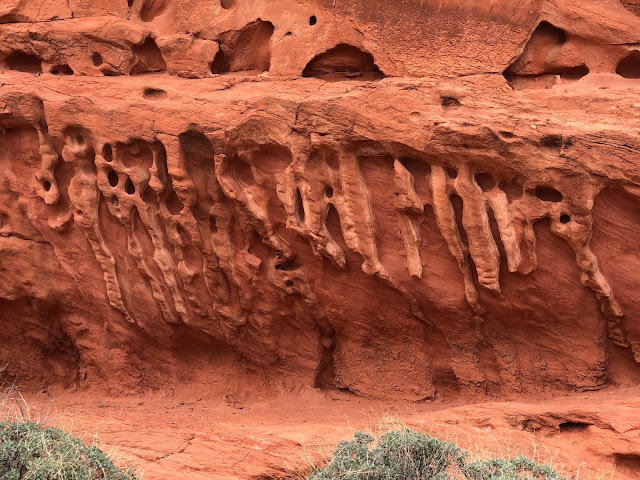 One more shot of our camp site taken from on top of a big rock across the road. 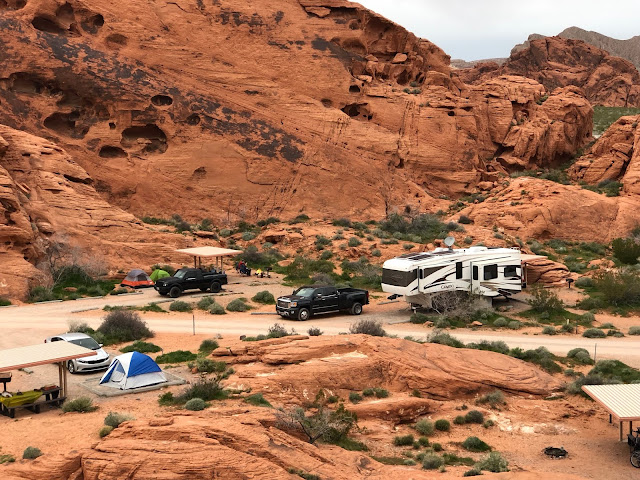 And now on to today's entry.
It's amazing what 24 hours and a couple of hundred miles can do. It was so nice yesterday at Valley of Fire. We had a few light showers last night, and this morning, while there were some clouds around, started out as a decent day. We were packed up and ready to go around 10 AM or so. Because we didn't have any internet at camp, we stopped at a truck stop just after leaving the valley to figure out what our plan was. The initial plan was to head for Ely, Nv via 93 and 6 up the Great Basin Highway. After we had gone only a short distance, I got to thinking that the "Extraterrestrial Highway" would be an alternate that wouldn't take us too far out of our way. That route runs close to the famed "Area 51" which is the secret US Air Force proving ground that some believe is also the hiding place of a UFO that purportedly crashed at Roswell, NM. You can't see anything from the highway as it is on the other side of some hills but there is another attraction along the highway. The "Little A'Le'Inn" in the little town of Rachel, Nv is a roadside restaurant/pub/motel that plays on the Alien side of things. 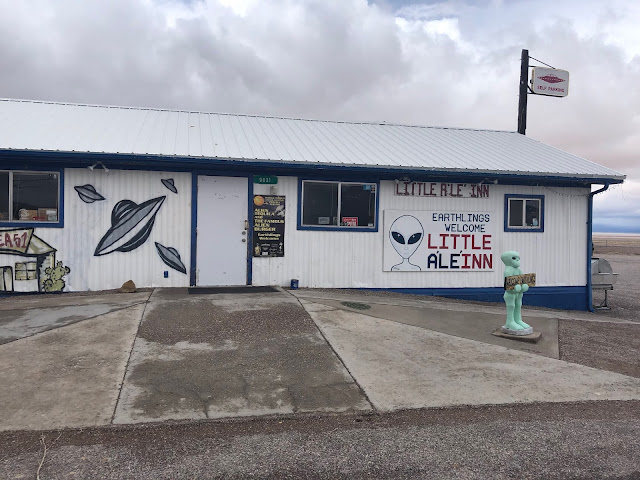 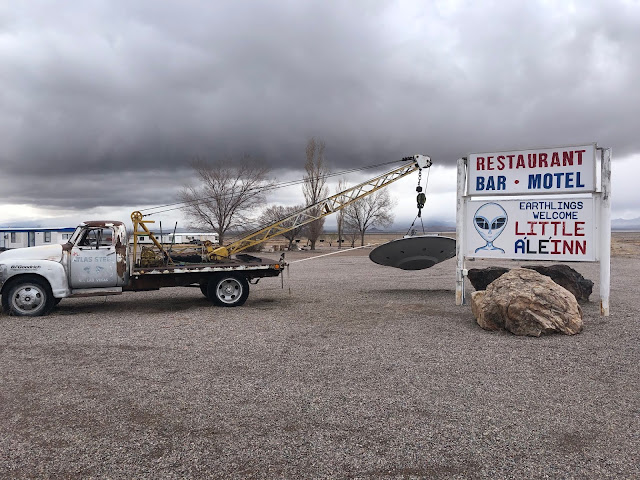 We got here right around lunch time so decided to stop and have a bite. The pub looks like it had its heyday about 20 years ago. It is a bit run down now, and sells the usual tourist kitsch. We ordered burgers which were very so-so and a bit over priced. Unfortunately this place, for us anyway, was totally forgettable. The Extraterrestrial highway as well had to be one of the most boring 100 miles of road I can recall.  Ah well, live and learn.
The western end of of the ET highway is a deserted little town called Warm Springs. Here we turned back northeastward and continued on to Ely. Part way along we could see a massive rainstorm ahead of us and even some lightning. Luckily it crossed our path and all we got was some showers and a very wet road for 10 miles or so. This stretch of highway is about 120 miles and crosses two fairly high passes. Just our luck, as we approach the first one at just under 7,000 feet, it started to snow! Just wet snow at first and not sticking to the road but as we approached the summit it was starting to stick and build up. 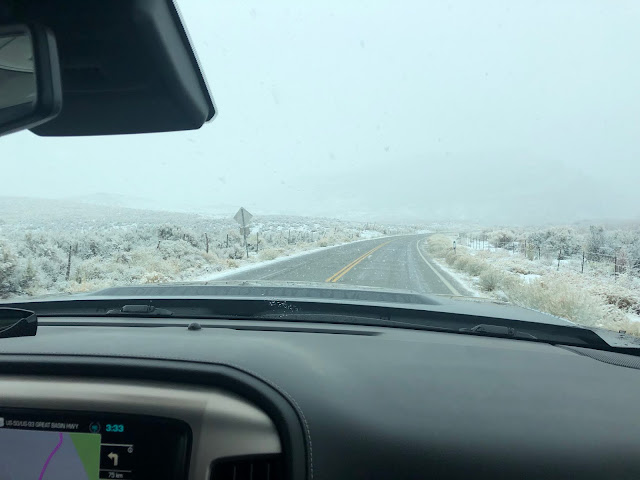 The road though still seemed OK. We took it slow and easy over that pass and made it through without too much fuss. 40 miles further on though was a different story. The second pass was even higher at 7,300 ft. and the snow got heavier and the build up on the road as well. The climb was fairly steep and all I could think of was "don't spin, don't spin"! I think that if we had, we would have been stuck. We crawled over the summit and took it real slow down the other side. The snow continued to fall heavily all the way into Ely.
We had planned to stop at the Hotel Nevada Casino for the night which we did. It continued to snow heavily for another couple of hours accumulating about 3 or 4 inches of wet snow.
This is the view out the side window from the hotels RV parking lot about 30 minutes before the snow stopped. 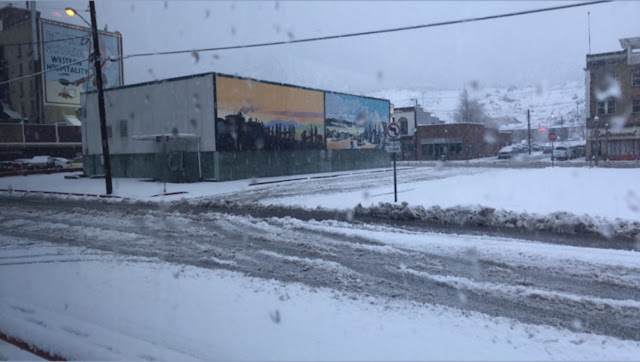 The forecast is for more snow for the next couple of days so we may be here for a bit. We will keep a close eye on the weather and won't venture out unless the roads look good. At least is is mostly down hill from here to our next planned stop in Twin Falls Idaho.
Posted by Rob and Chris's travels at 9:40 PM