Boomerville is still growing. As of the happy hour circle tonight we are just shy of 150 rigs.

When I left off the last entry, I had a tank load of black water in the back of the truck that I wasn't able to get rid of on Tuesday. Yesterday morning we had a couple of things that we needed to get done. That was one but the others were laundry and Maya had an appointment to get groomed.
So right after breakfast we headed into town. First was to drop Maya off at the groomer then I dropped Chris off at the laundromat so she could get started with laundry while I took care of the other chore.
The RV Pit Stop in Quartzsite is only half a block north of the laundromat so over I went. Recall that Monday and Tuesday were very wet here. I guess they must have had some water pooling in the parking lot at the Pit Stop and had dug a small 4" deep drainage channel to direct the excess water into the dump station. Unfortunately, after things dried up, they neglected to fill that trench back in and guess what I found with my right foot as I stepped out of the truck? Yup, I turned my ankle! At first I was afraid I had broken it again as it was the same one that I did break 20 or so years ago. It sure hurt like it anyway. Once the initial shock had worn off, I could tell that it wasn't broken as I could still put some weight on it and managed to hobble around to the back of the truck and finish dumping the tank. I think the most annoying thing was that the attendant, who was right there and saw what happened, barely gave me an "are you OK?" before walking away. Also when I mentioned that the ditch was a hazard and should be filled in, they didn't seem to care at all.
Anyway, I finished dumping that tank and headed back to the trailer to load up again. When I got back to the Pit Stop, they still hadn't done anything and I doubt they had any intention of doing so.
At any rate, after finishing that chore, I went back the laundromat to pick up Chris as she was just finishing up. Then over to the groomers to pick up Maya and back to camp.
It took another half hour or so to get the clothes line set up and other stuff put away before I was actually able to take my shoe and sock off to see what my ankle looked like. Surprisingly, while there was some swelling, there was no bruising which was a good sign.
I took things pretty easy for the rest of the day and stayed off my feet as much as possible and by bed time, the ankle was feeling quite a bit better although was still somewhat stiff and sore.
Today was better yet. While it is still pretty stiff, I can walk with only a slight limp and it doesn't hurt much unless I step on something wrong.
Over the last few days we seem to have connected pretty good with another couple here parked next to us. Michael and Kathy Canto from Washington. This morning Chris and Cathy went into town to the Rock, Gem and Jewelry show at the QIA complex while Michael and I re-positioned their trailer to get better exposure for their solar panels. Michael also does most of their cooking and had made up a bean soup kind of dish which turned out to be more like a chili. Regardless of that it was very good. It also came with a homemade corn bread which was also yummy.
Tonight was the first night where we actually had a campfire! So after supper we went over and joined the gang around the fire for a while.
Oh and just before supper, we were treated to another fine Arizona desert sunset! 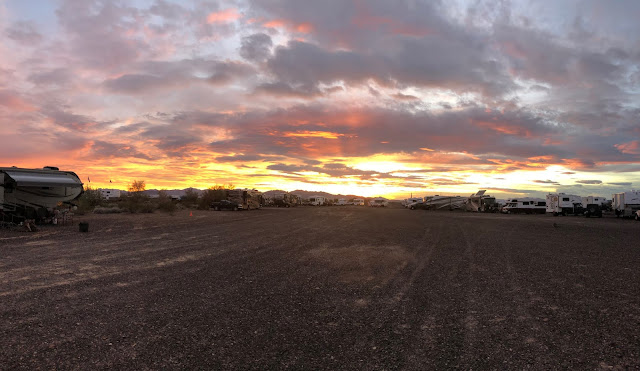 Posted by Rob and Chris's travels at 8:48 PM