On the move again.

We had another nice sunrise yesterday although that was the last we saw of the sun all day. The clouds rolled in and it actually threatened showers a couple of times during the day. 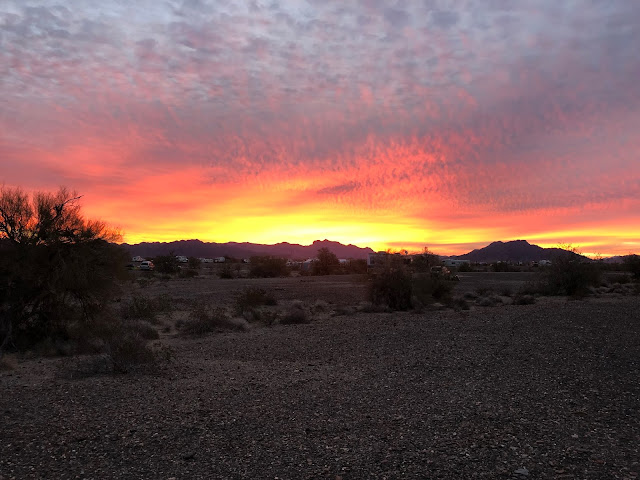 After breakfast we went into town as there was a yard sale that had caught Chris's attention as well as a flea market / craft fair at the QIA (Quartzsite Improvement Association). The QIA is kinda like a community centre and fair ground. They host a number of events there such as the flea market we went to yesterday.
While wandering around the QIA, I ran into an old co-worker from BCLC. A fellow named Eric Jeffries who retired back around 2003 as I recall. I hadn't known it but he and his wife Gertie have been wintering down here for the last 12 years or so.
After that we headed back to the trailer for lunch and a fairly quiet afternoon.
Around about supper time it started to rain lightly and the showers continued all evening and through the night. Not nearly as heavy as the rains we had while at Imperial Dam although enough to thoroughly wet things down.
While doing dishes after supper we ran out of water. I knew we were getting low but thought we had a couple more days worth. We had planned to refill when we moved over to the Boomerville location on Tuesday, but this kinda prompted us to move a couple of days early.
So this morning we packed up camp, dumped our holding tanks, refilled water and made the move. It wasn't far, maybe 15 Kms or so. The new location is North of Q and just North of Plomosa Rd. Over the next week or so we are expecting up to 200 rigs from all over the states to congregate here. If you click on the Our Wanderings map in the right margin you can see where we have been and where we are now.

Posted by Rob and Chris's travels at 9:05 PM