We have made a couple of excursions on our days off this month. The first one was a short drive up the Sheep River, through the foothills and into the Eastern Edge of the Rockies. We drove West on highway 7 through Black Diamond and Turner Valley then highway 546 into Kananaskis Country and the Sheep River Provincial Park. We drove to the end of the pavement then turned around and checked out a couple of stops on the way back. Bluerock Campground which is a wilderness campground. Nice but 99% of the sites would be too small for us.
Our next stop was the Sheep River Falls just a couple of kms East. We got out here to stretch our legs and give Maya a bit of a break.  They have set up a nice picnic area here and there are several walking trails up and downstream. 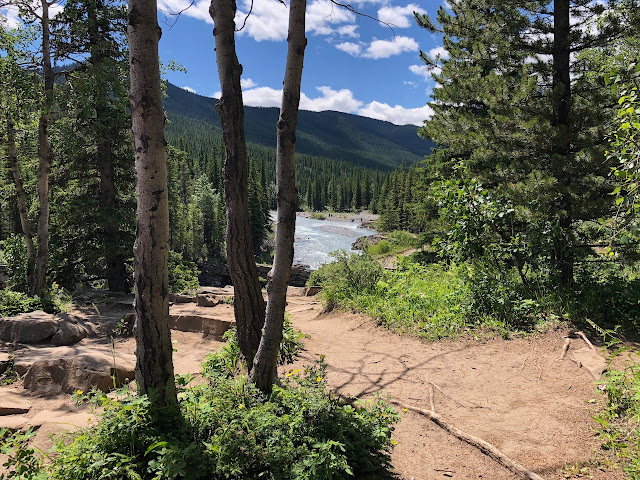 The river has dropped a lot since we got here in May! I can imagine what it must be like during the spring freshet. 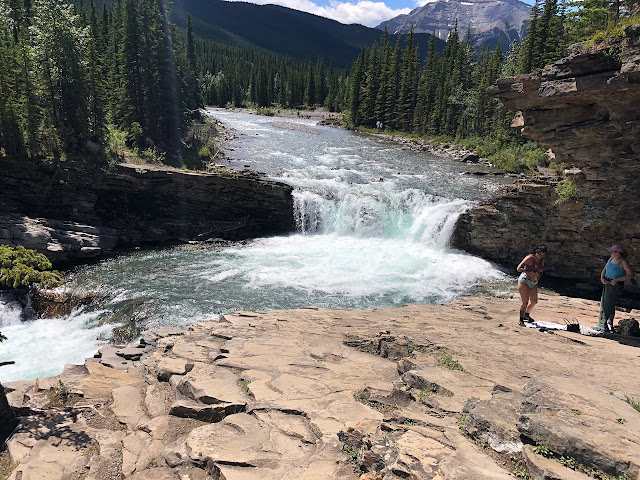 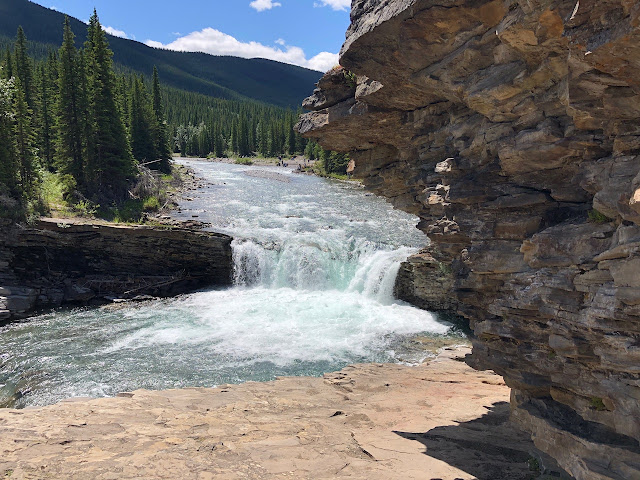 After leaving the falls we stopped at the Sandy McNabb Campground. There was a bit more development here in that quite a few sites had power and there were a number of sites that would work for us. They also had a couple of group camps that were being used as overflow camping. Mostly these are in an open field which would actually be perfect for us. Gives us good sky exposure for both our solar panels and the satellite dish.
Our next excursion a couple of weeks later was to Drumheller, about 2 hours NE of Calgary. Drumheller is home to one of the best dinosaur museums in the world (CNN). The Royal Tyrrell Museum. Chris and I had been here once before about 15 years ago with her niece and nephews. The kids were pretty young then so we went through it pretty quickly. This time we were able to take our time and actually read the info on many of the exhibits. Alberta has one of the richest deposits of dinosaur fossils in the world and the Tyrrell museum highlights these.
As is frequently the case, they had one section of the museum shut down to overhaul it and put up new displays. Essentially everything from the last mass extinction 65 mil years ago to the present. 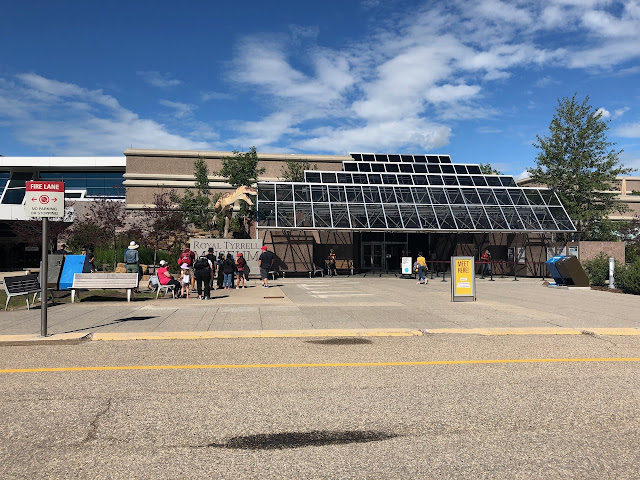 This is the first thing we ran into on entering the museum. That's quite a mouthful! 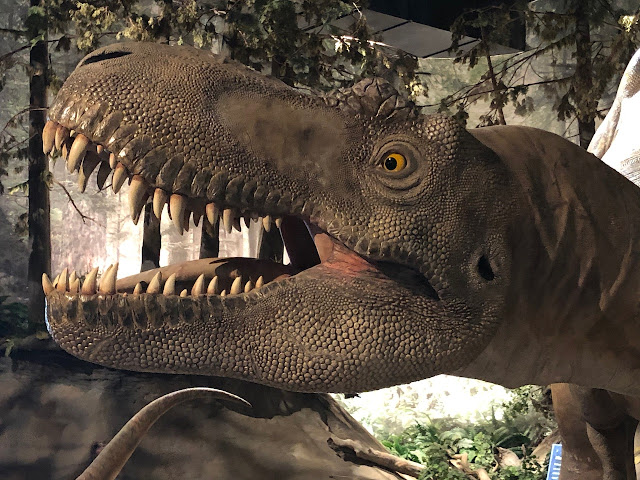 This guy reminds me of the pet calot, "Woola" from the movie John Carter 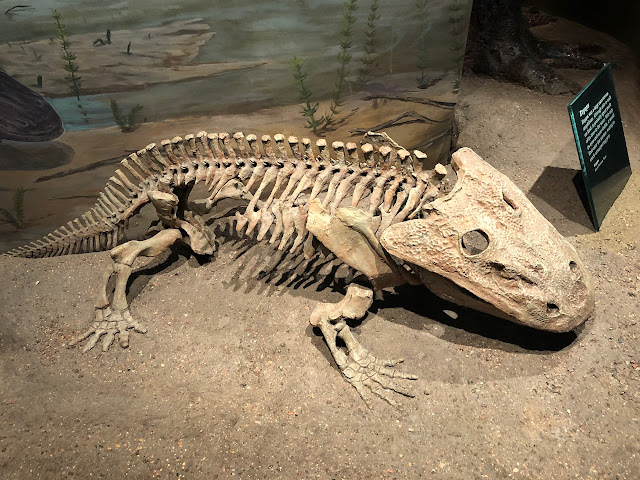 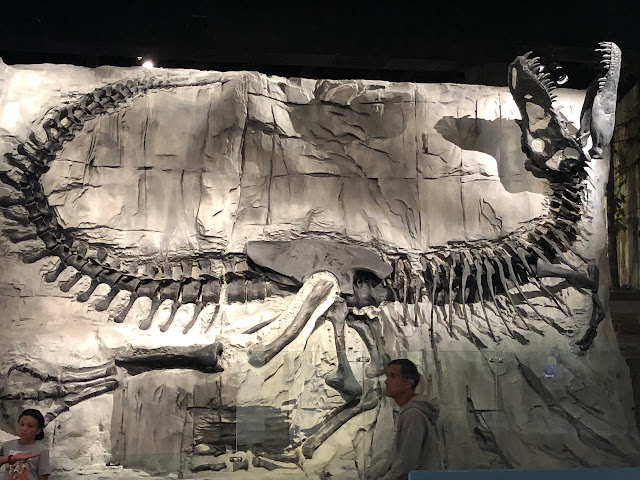 At the end of July, we took a drive south to Nanton. We have passed by here a couple of times and noticed a place called the Bomber Command Museum. What gave it away was a big hanger right on highway 2 with a complete Lancaster Bomber in it. 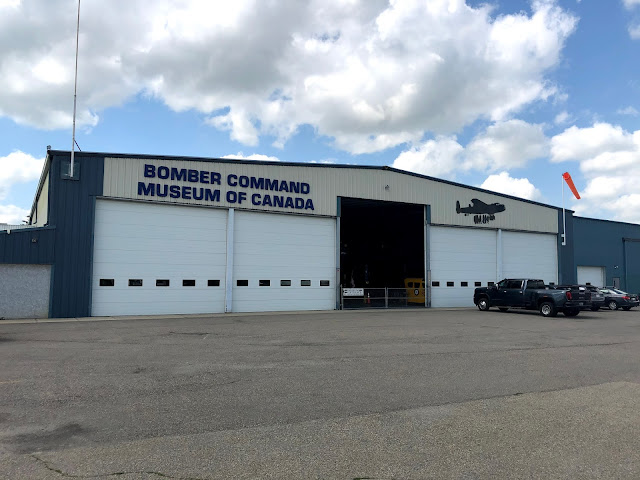 This time we decided to pay a visit. Upon entering we found it was a lot more than just a hanger with an old Bomber in it. They have many displays of aircraft, vehicles, informational displays and more. Chris and I spent about 2 hours exploring it and by the end were suffering from information overload. 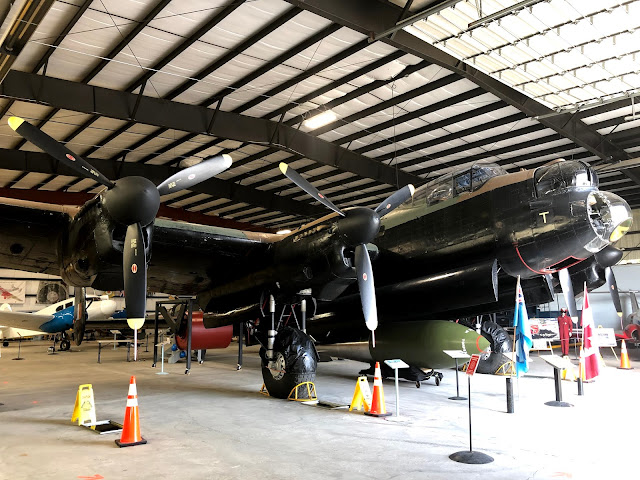 While this big bird will likely never fly again, they do bring it out a couple of times per year and run up the engines. That is an event that usually draws quite a crowd. Unfortunately all that has been put on hold this year due to COVID-19. 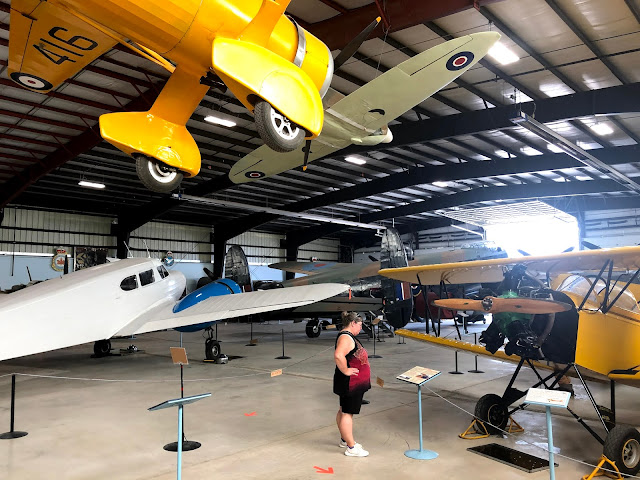 One interesting thing I learned was the importance of military aviation in Southern Alberta during WW2. Many pilots were trained here at a number of locations south of Calgary. 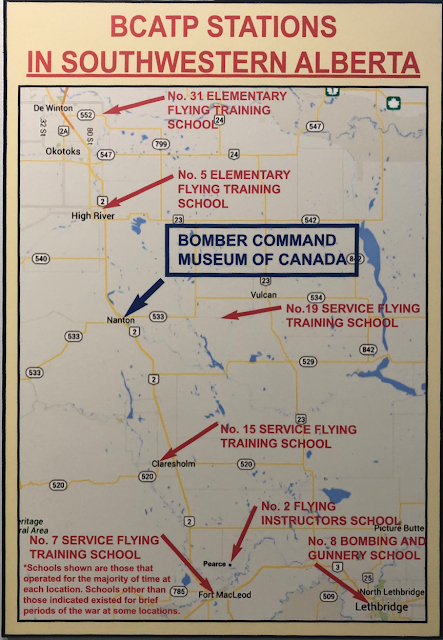 After leaving Bomber Command we took a short drive East to Vulcan, AB. What makes this small town special is it shares its name with a fictional planet in the Star Trek universe and they are capitalizing on that. They have a visitor centre that is styled to look like a space station.

As well as a large model of a Star Ship. Not the 'Enterprise' but close. 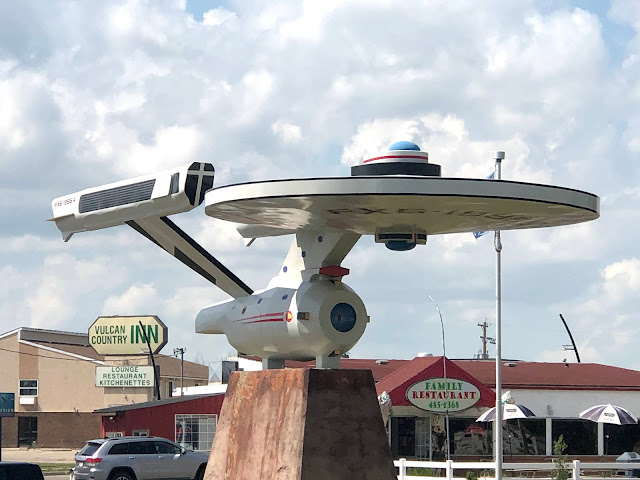 They even style their street lights to look like a starship! 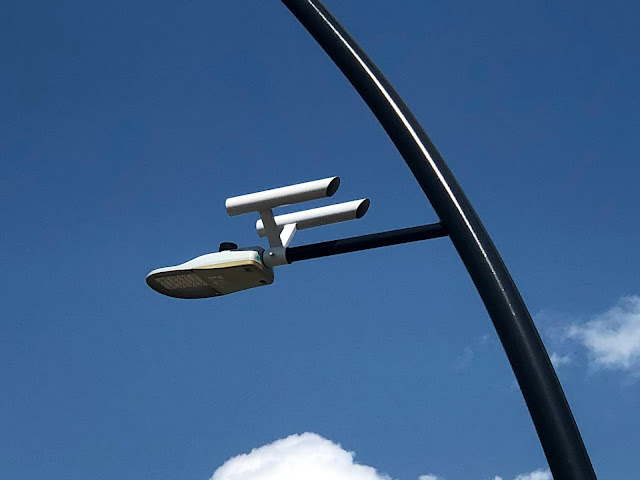 So by now, you may be wondering what camp hosting is all about.
This year is a bit atypical but my work day starts about 6:30 on weekdays with about 2 hours of irrigation. We don't have the luxury of automatic sprinklers so we wind up dragging hoses around for that time. After that it is the first garbage run of the day followed by cleaning out firepits.
By this time it is usually coffee/breakfast after which, if there are lawns to mow or grass trimming to be done, I do that. Checkout time is 11 AM and at this point we get the camp ready for the new arrivals which starts at about 1 PM. This involves sanitizing all the departure sites by wiping down the picnic tables and power pedestals with a bleach and water solution.
Through the afternoon I am escorting arrivals to their sites,  helping them get parked and doing any minor chores and maintenance items that need to be done.
We break for supper between 6 and 7 and after that, I do the second garbage run of the day and get things ready to put the camp to bed. Weekends we don't mow or irrigate but otherwise it is about the same.
Technically we are on duty all night but so far haven't had anything come up to disturb us.
Chris works in the office and her day starts about noon. She takes telephone calls, makes reservations, checks guests in and otherwise liaises with the guests and sells firewood, etc. We have a small concession which she also looks after.
We typically work 2 days on after which we have 4 days off.

Posted by Rob and Chris's travels at 4:42 PM