It's been a couple of weeks since the last update. We were hanging out near Lake Havasu City with good friends while waiting for the start of Winter Blast which I wrote a bit about in the last installment.
During the 2 weeks we were here waiting for Winter Blast to start we did some touring around and checked out a bit more of the town.
One day, we parked down near the bridge and just took a stroll along the canal. Lake Havasu has a number of functional navigational lighthouses. One thing that is interesting is what they have done with them. There are somewhere around 30 lighthouses on the lake and quite a few right around the city proper. There is a club in town, the Lake Havasu City Lighthouse Club, who have converted most of the navigational lights into full functional 1/3 scale replicas of actual lighthouses around the US. 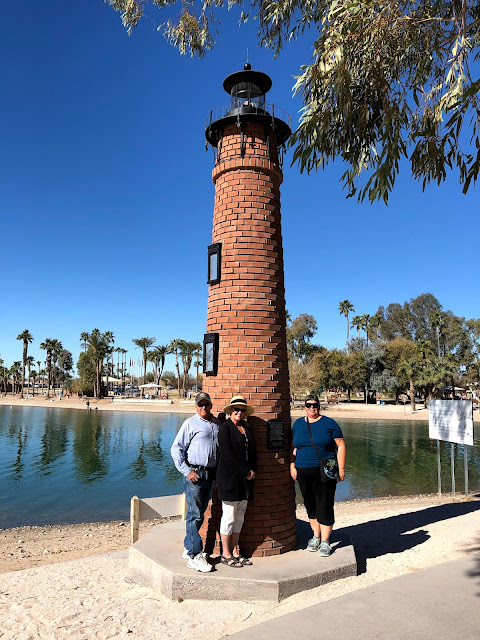 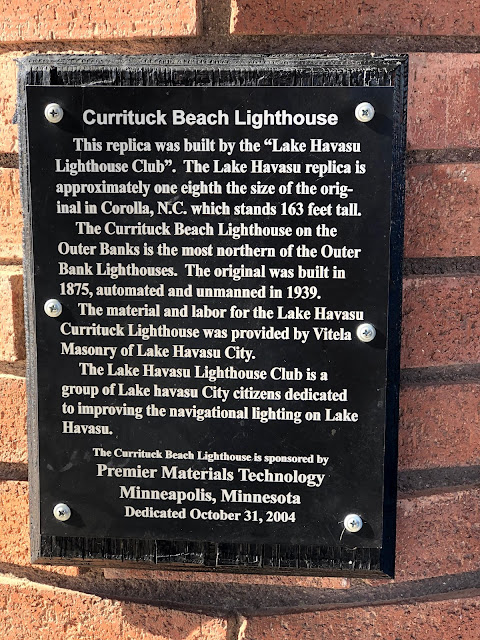 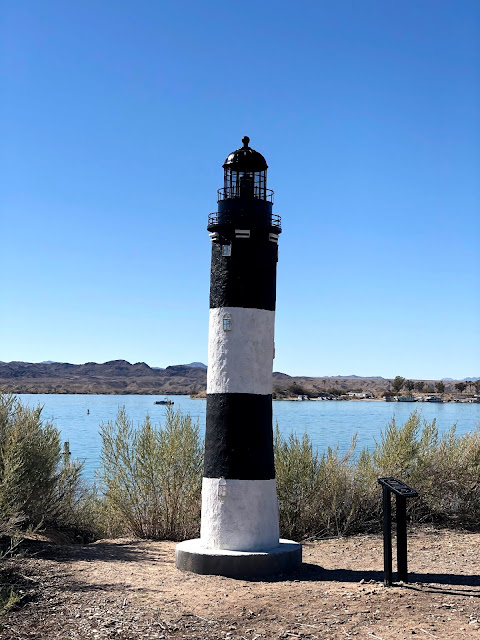 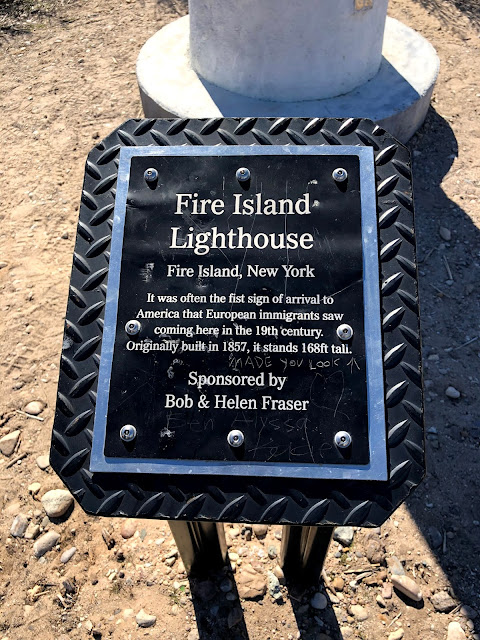 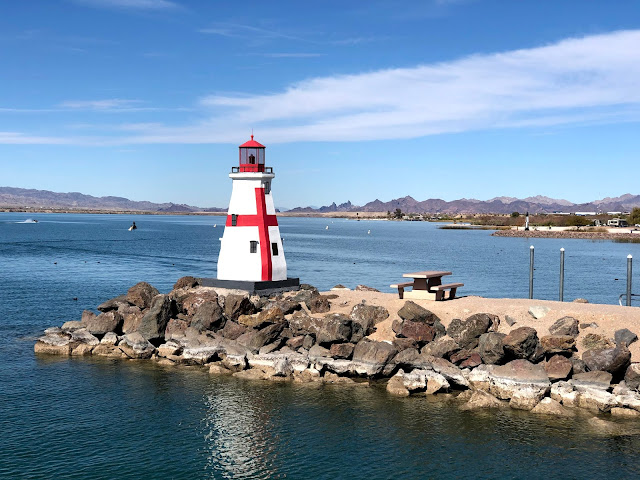 Another day, we took a short ferry ride across the lake to the new Havasu Landing Casino. We went more for the boat ride than the casino, but did drop in to lose a few bucks. Most US casinos still allow smoking in the facilities and frankly the smoke drove us out in fairly short order. 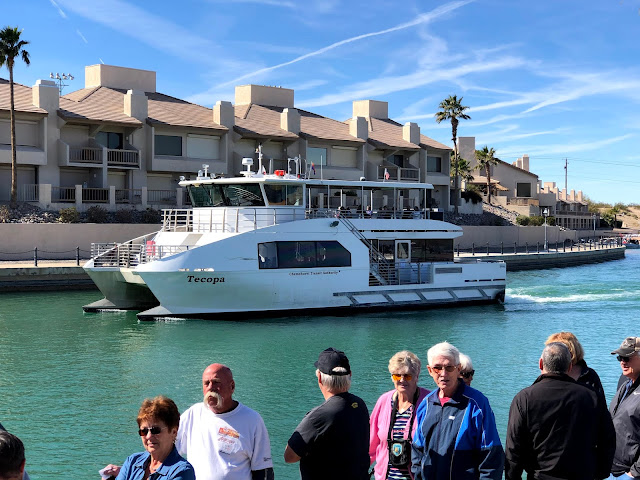 The fireworks shows started on Thursday and for the first night, we elected to watch from camp. I did take the time to check out a ridge close to camp that I thought would be a better vantage point for watching the fireworks. 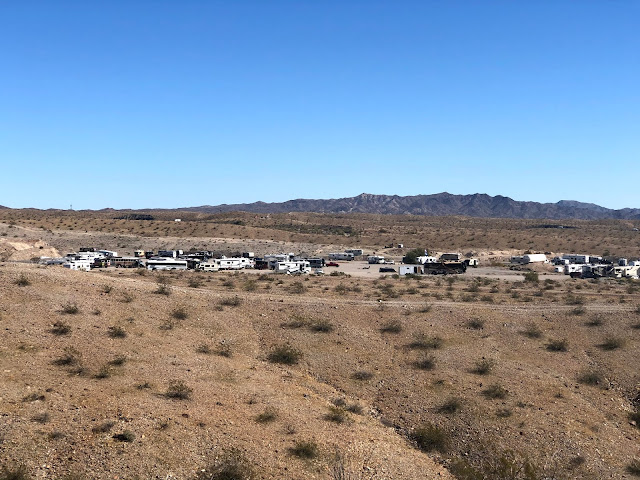 This is the view from the ridge looking back toward the camping area. Our rig is at the far right edge of the photo.
Around dusk they started shooting off some of the earlier effects. Being that it was still quite light out, not too much was visible. Later on, there were some nice effects but we were in a spot where we could only see the higher level bursts. There wasn't an official show on Thursday so we really weren't expecting a lot.
Friday was the start of the official shows and they kicked off just after sunset. Again we elected to watch from camp. There were sporadic shots until 7:30 when the official shows started. The first one was about 15 minutes long and was mostly low level so we didn't see too much. The second show however was mostly high level and was very impressive. There were several effects I hadn't seen previously. The main shows ran until 8:30 but there were shots going off right up until about 10PM.
We were worried about how Maya would react as she does not like any kind of loud bangs or booms. While definitely uneasy, she didn't do too bad. She stayed in the trailer most of the time and curled up in her safe place in the bedroom beside the bed or under the kitchen table. There were a couple of real loud effects, called salutes, that rattled the trailer even as far away as we were which she really didn't like though.
Saturday, Steve, Tammie and I, drove up onto the low ridge where we had a clear view of the firing lines. Tammie and I set up our cameras and attempted to photograph the show. I had played around with photographing fireworks a bit in the past but this was something all new to Tammy.
Long story short, we had a great time. I think we both got some good shots and both learned quite a bit. I do know one thing though; my camera is ancient! After playing with Tammie's for a bit, I am very envious. 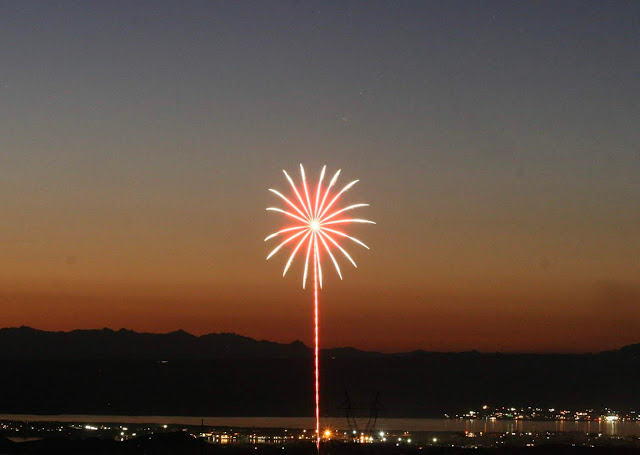 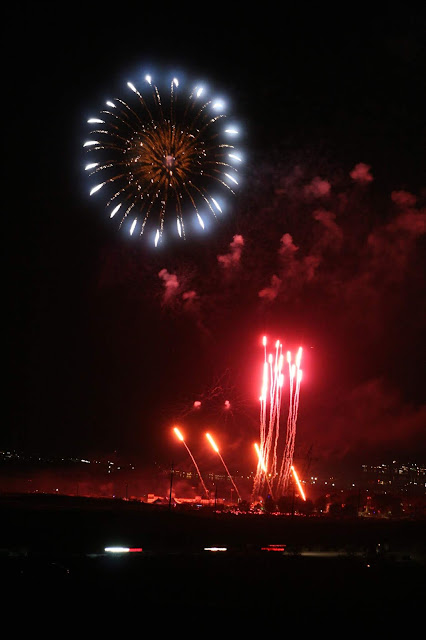 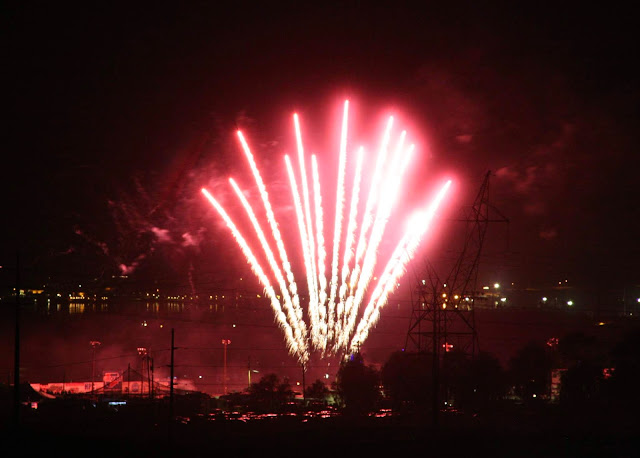 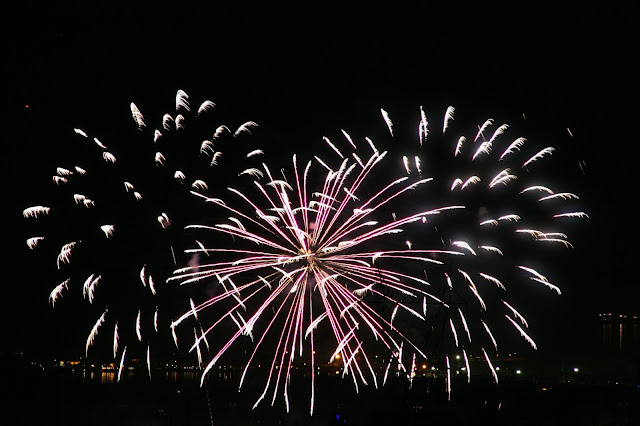 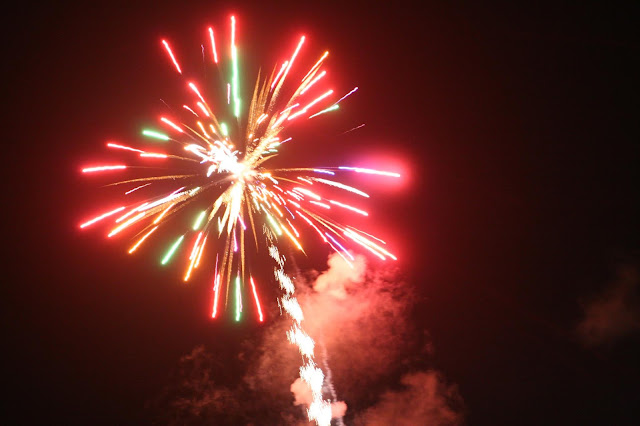 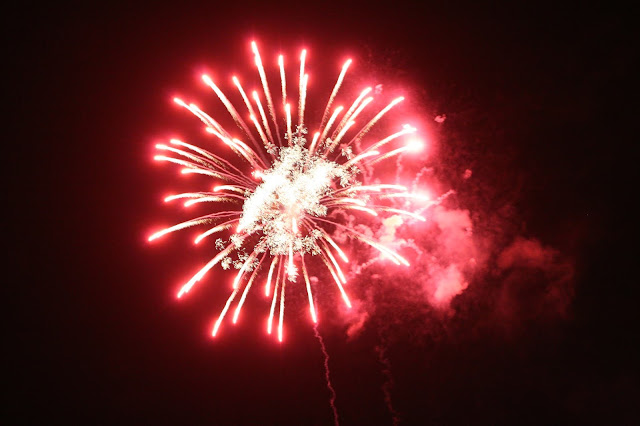 Both of the shows on Saturday were fantastic. Lots of variation in effects, colour and patterns.
Sunday evening, we again watched the show from the ridge but Saturday was the main show. There were some good sequences on Sunday, but it wasn't nearly the show that Saturday was. There were also a couple of bright lights that were affecting our photography as well.
Monday was a sad day as it was the day that Steve and Tammie, and Chris and I parted company. We had traveled together for over 6 weeks and got to know each other quite well. They were planning to hang around Havasu for a while longer while we needed to get to Yuma as we had an appointment to get some more warranty work done on the trailer. We also wanted to be in Yuma for the Yuma Aeromodelers 'Fly Yuma' model airshow. I have taken part in this show for the past 2 years and am always amazed at the spectacle they put on.
We were able to get most of the planned warranty items taken care of (but not all) then over to Fortuna de Oro RV park where we had a coupon for 3 free nights. This gave us a chance to get caught up on a few things in town before the airshow weekend.
Thursday, while still at the RV park, I loaded the jet up and took it out to the field. I hadn't flown it since September in Princeton and wanted to burn the dust off both it and me before the show. Made a couple of flights and by the end of the session, was feeling quite comfortable again.
Friday, we took the trailer back out to the airfield and got it set up. We were able to get the same spot we have had for the last couple of years just off the parking lot. 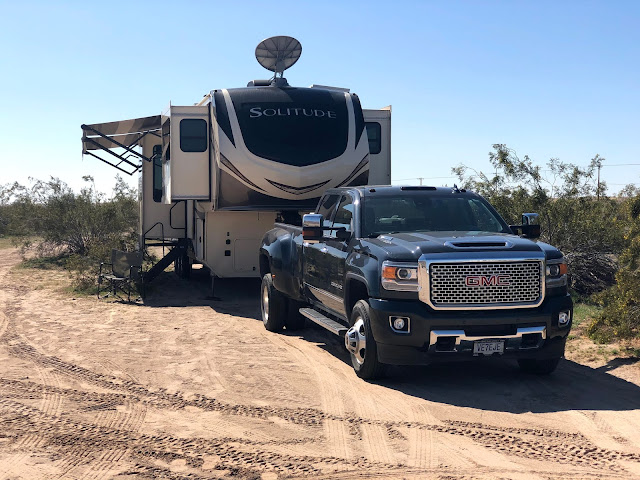 I put in another flight and felt ready for the show on Saturday.
It would be nice to say that airshow day dawned sunny and warm but alas, that wasn't the case. I should of known because we had a stunning sunset the night before which indicated clouds moving in. 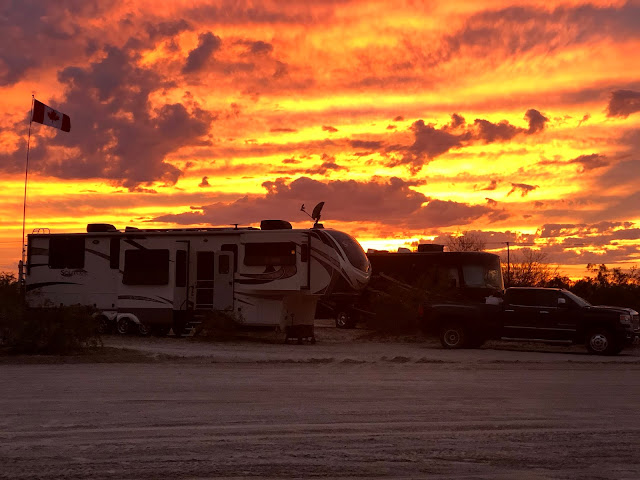 I was up about 6 on Saturday and noticed it had rained somewhat over night and was still quite cloudy and overcast. I started getting my gear set up and about 9AM the skies opened up! It was the hardest rain we have had since leaving in October. It rained quite hard for almost an hour but then started to clear about 10AM. The show was supposed to start at 10 but it was looking promising so was delayed to 10:30 by which time most of the clouds had moved off and the sun was back out.
The show went off without any more delays and was very successful. I think the attendance was down a bit due to the weather though but there was still a very impressive turnout. 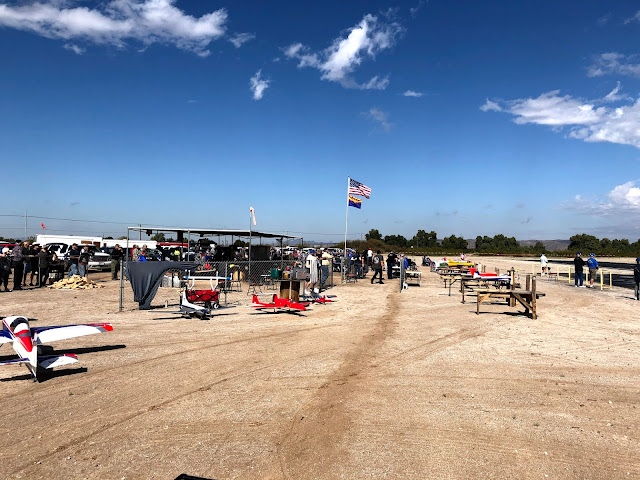 Just a part of the crowd line. People were lined up 2 deep along the entire length of the runway. 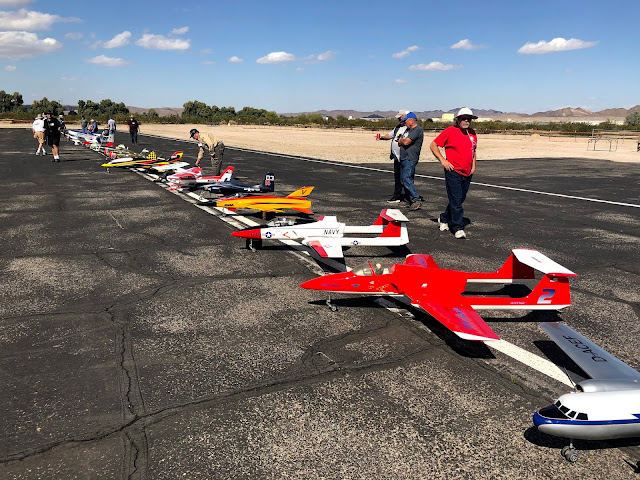 After the formal flying portion of the show, everyone moved their aircraft out onto the runway and the public was allowed onto the field to look and ask questions.
Sunday was a model swap meet at the field and once that was done, we packed up and moved on to our next stop which is still in Yuma. Another couple who we have become good friends with have purchased a lot in the foothills area of Yuma. They plan to park their trailer here for most of the winter season. The nice thing is their lot has enough room for two rigs. It was a bit tight but I managed to squeeze our Big Ass Trailer (the B.A.T.) into the space alongside their Arizona room. 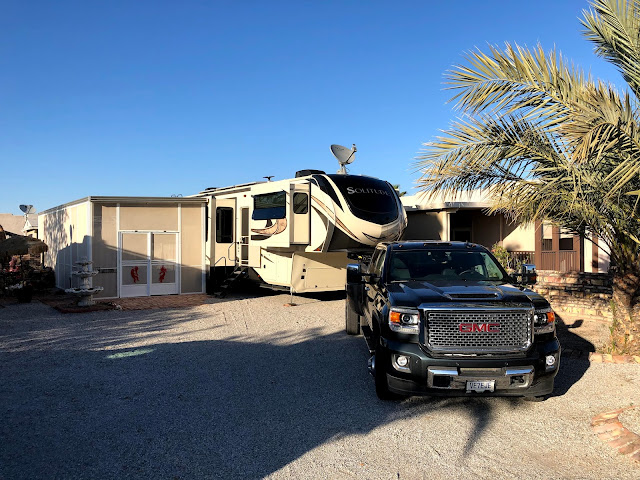 The plan is to hang out here for a week or so or until a new set of lenses Chris needs for her glasses arrives. After that, we will head east towards New Mexico before turning north.
Posted by Rob and Chris's travels at 8:31 PM