Grand Design Rally and back to Boomerville

As planned, a week ago Tuesday, we pulled up stakes and headed about 15 miles south to another boondocking area for the Grand Design Owners Rally. When we arrived, there were already about 40 or 50 other GD rigs set up. We found a good spot in the Solar section and were set up in short order.
Over the next couple of days, Grand Design rigs started streaming in. By the official start of the rally on Thursday, the count was up to 181 rigs. Everything from the smaller Transcend and Imagines right up to the largest Solitudes and Momentums.
Over the next few days they had quite a few very interesting sessions scheduled, most of which I attended. Everything from solar to suspension upgrades to maintenance. It was all very informative. Grand Design had a crew of factory techs on site for the duration who were kept quite busy attending to critical problems and recalls. We had them look at one problem we have with one of our slides but unfortunately they didn't have the required parts to fix it on site but were able to authorize the repair for a later date.
One interesting sidebar was the number of attendees who almost never boondock, always being hooked up to power in a park somewhere. The first couple of nights a lot of them ran their batteries dead overnight and woke up cold and had to run generators to recharge, only to do it all over again the next night. There was quite a bit of grumbling over that. We, of course, were just fine.
The one downside we ran into was that Chris came down with another cold a few days before we headed over there. Unlike her usual colds, this one turned into bronchitis and left her sounding like a seal with deep, deep coughs. She had it the whole time we were there and is just getting over it now, 2 weeks later. That somewhat curtailed our socializing with the others unfortunately.

Here are a couple of photos shot from a drone. You can see our rig in the second shot just right of centre with the satellite dish on the roof. In this first shot, we are just out of the frame to the left. 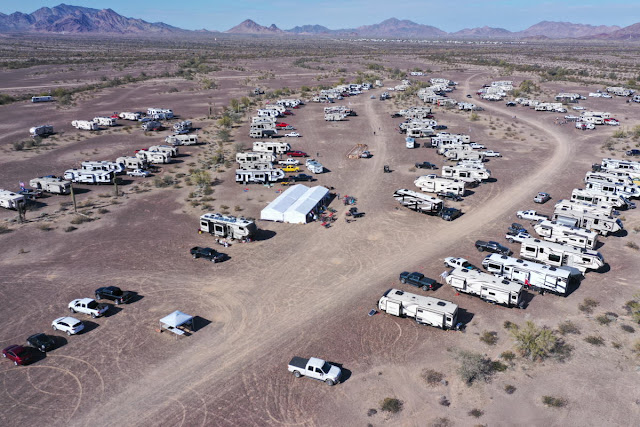 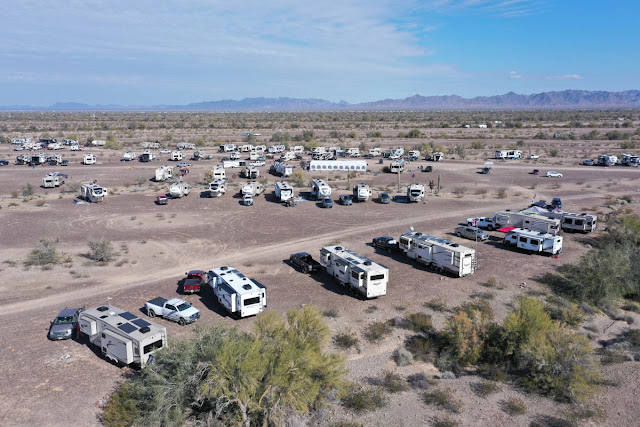 And another stunning sunset. We had several, as well as a couple of really nice sunrises as well. 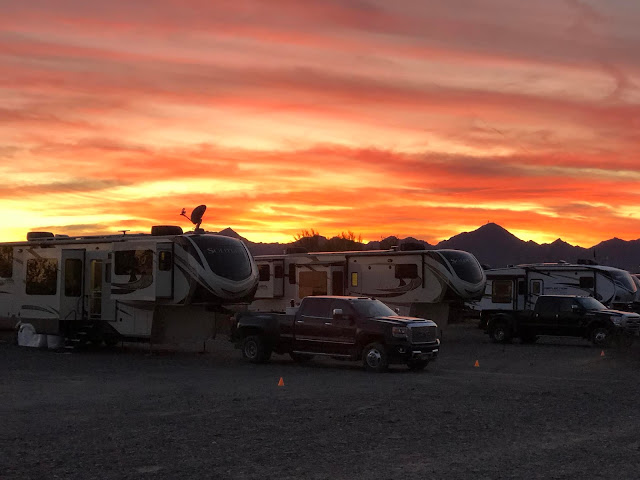 Also while we were there, was the full (wolf) moon. I caught this one just as it was setting Saturday morning. My iPhone camera doesn't really do it justice. 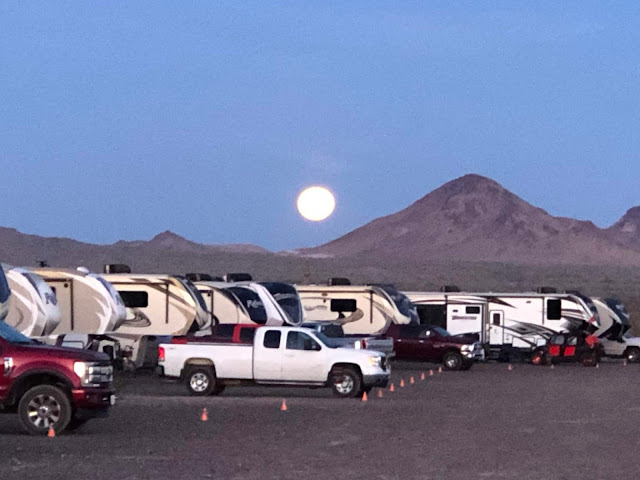 Sunday morning after one final presentation, many people started packing up, and as we wanted to get back to Boomerville, we did the same. Even with Chris's bronchitis curtailing things for us somewhat, it was a good event and if we are back here next winter, I think we would consider doing it again.

So back to Boomerville... Quite a few more folks had arrived when we got back but we had marked off our spot and it was still unoccupied. We got set up just in time for the welcome happy hour on Sunday. We had a good time reconnecting with a number of people we hadn't seen since last year.

There are lots of activities going on all the time so always something to do. Yesterday my friend Steve and a couple others had organized another Jeep excursion. I tagged along and we wound up a few miles northwest of Parker. They had a plan to try and find a route around a mountain that promised to provide some opportunity for some challenging terrain.

Here is the gang planning out our route. 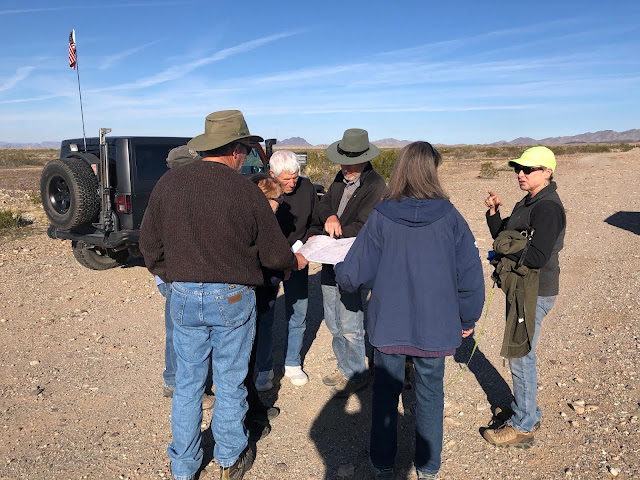 Heading into the wash 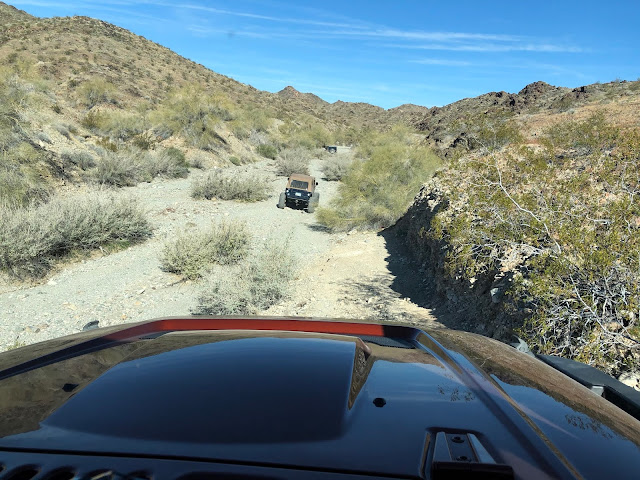 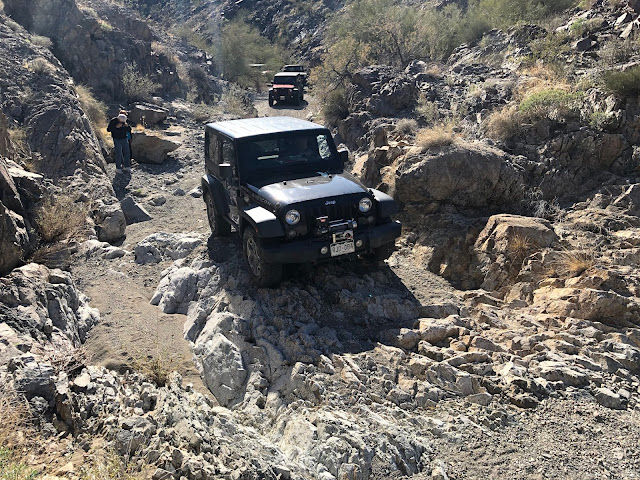 Steve spotting and guiding one of the other drivers 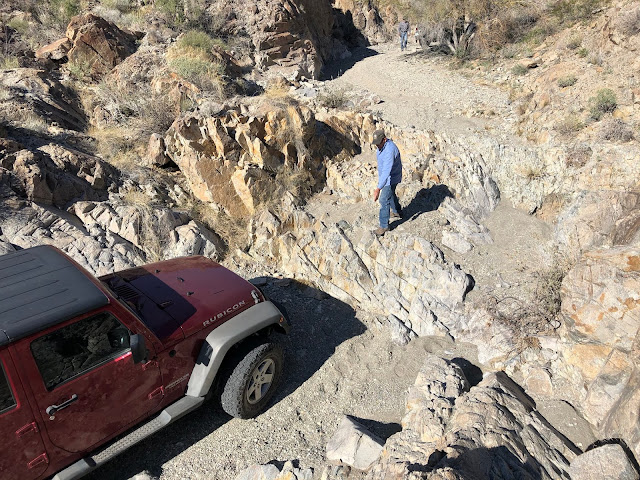 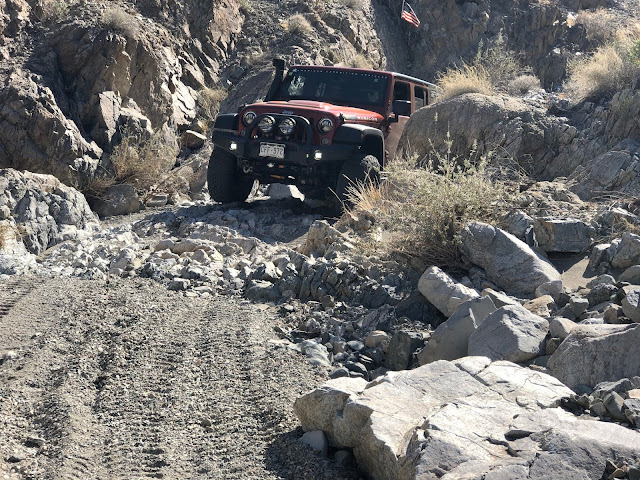 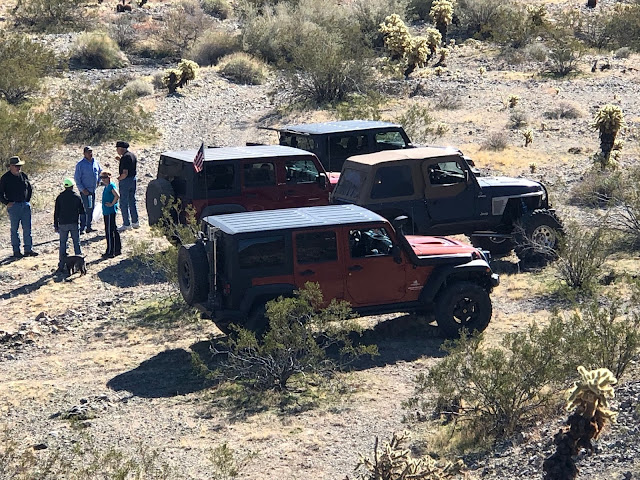 An old mine site we came across. There was quite a bit more here but we didn't stop other than to figure out where we were heading to next. Both Steve and I wanted to stop and spend some time exploring. Besides this water tower, we could see what looked like the remnants of an old powder magazine and an open shaft along with some other structures. 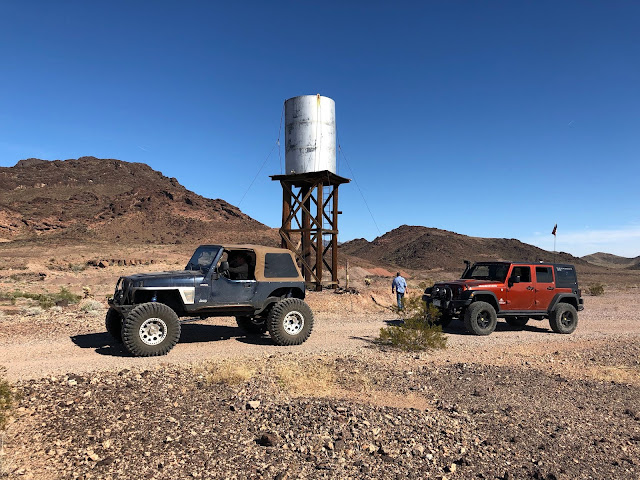 All in all, we were gone for most of the day. While we were off doing this, Steve's wife Tammie and Chris were doing manicures and foot massages back at camp with proceeds going to the Escapees charity, C.A.R.E. I think I heard they brought in about $160.
Today, Chris did up a batch of her cinnamon buns and put them out for a donation to C.A.R.E. 4 pans brought in $240! Well done!

Just for comparison purposes, here are a couple of shots of before and during Boomerville. 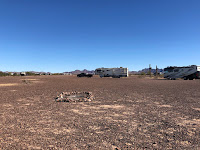 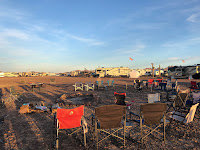 This is only about 20% of the rigs here!
Good news too. The last few days Chris has been feeling much better. Still a bit hoarse and coughing a bit but past the worst of things. So far, I am still OK (fingers crossed!)
Posted by Rob and Chris's travels at 5:38 PM