To start with, yesterday was quite a busy day. I had thought about going flying in the morning but there was so much interesting stuff happening around Boomerville, I decided to stay here.
We started out with a pancake breakfast at 8 which took about an hour, then there was a good round table discussion on batteries and charger systems which took another hour and then through the afternoon I wound up helping a couple of the neighbours trouble shoot their solar systems.
Later in the afternoon was a chili cook off with 9 different chili dishes up for judging. They were all good but I found a couple that stood out. I think one of my favorites actually won the contest. 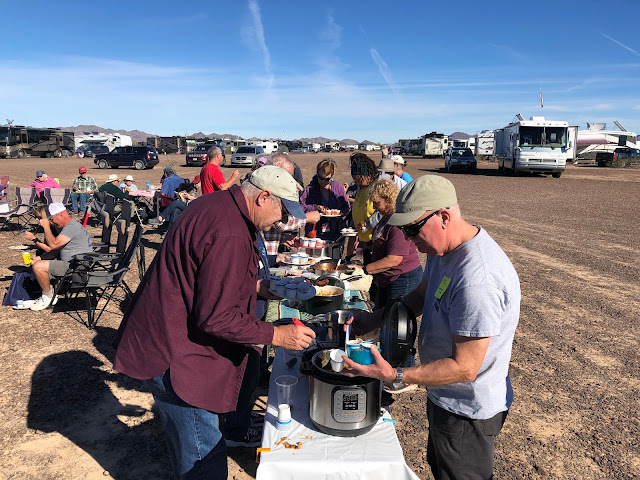 After that was the usual happy hour then the normal evening routines.

Today however, I did get to go flying. It was a nice sunny, no wind kind of day so I unpacked the jet, loaded up the truck and headed for the local flying field. 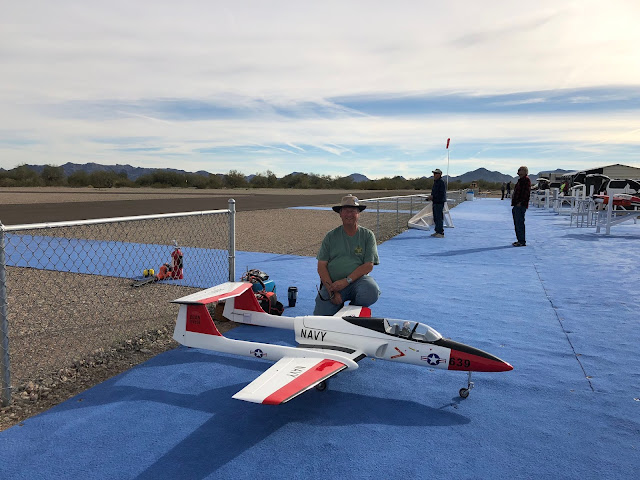 There were quite a few guys out, most of them with small electrics and a few with glow fueled engines. I was the only jet there which roused a fair bit of interest.
I managed to get 4 flights in but was having some issues with the engine. Flight #2 had a flame out only a minute into the flight and #4 had another one just before I was planning to land anyway. Fortunately I had lots of altitude and speed both times so was able to get back to the runway safely. I will have to do some investigating as to why.
After flying, Chris and I went back into town and wandered through the big tent at the RV show for a while. We didn't buy anything other than a huge bowl of ice cream for $5. After finishing that it was back to camp arriving just in time for happy hour.
One of the organizing crew here collects pictures of funny signs so after dinner and once the sun had gone down, he did a video presentation of his collection. Some of them were hilarious and had the whole group in stitches.
Tonight is also the lunar eclipse and as I write this the moon is half covered. There is quite a bunch out around the camp fire watching it. I will go out before bed when it should be fully occluded and the blood red moon visible.

Posted by Rob and Chris's travels at 9:14 PM